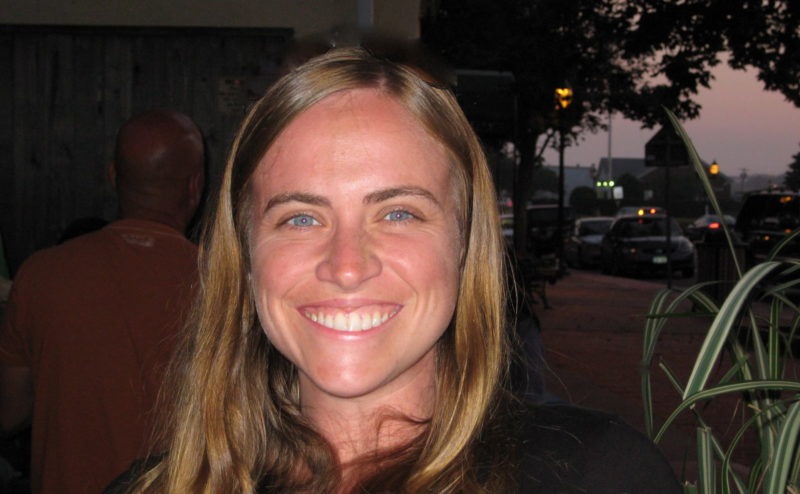 From RI to Oscar: Talking with Producer Erika Hampson

Share
Producer Erika Hampson talks about her Rhode Island roots and her recent producing work on several narrative and documentary films including the Academy Award-nominated short 'The New Tenants.'

With several films, both narrative and documentary, released in the past year including the Oscar-nominated short The New Tenants, Producer Erika Hampson talks with NewEnglandFilm.com about how she started producing, her recent and future projects, and some advice for aspiring producers.

Michele Meek: I saw you grew up in Cumberland, RI — tell me a bit about that. Did you know you wanted to get into films?

Erika Hampson: I lived in Cumberland until I went off to college and I still have very close ties to my hometown.  My parents live in the house where I was raised.  My brother is a policeman for the town and lives in Lincoln, RI.  To this day, some of my closest friends are people I met in kindergarten and at the middle and high schools.   Even though I live in New York, I still try to get back there as often as I can to see everyone.  Plus, I get home cooked meals and it doesn’t get much better than that!

I knew from high school on that I wanted to be involved in entertainment.  I was never really sure in what capacity.  I thought maybe as a writer, director or producer and I tried my hand at all of those things in college. I just had faith that I would eventually figure it out.  Whenever anyone asked what I wanted to do when I graduated from BC, I would vaguely say ‘work in television or film.’  Lucky for me, it all worked out.

MM: What led you to the producer role specifically?

Hampson: That can be summed up in two words: Vincent D’Onofrio.  I started as a PA on Law & Order Criminal Intent.  From there, I started working as Vincent’s assistant.  One day, a few seasons in, he decided he wanted to start directing and producing his own films and said he wanted me to produce them.  He basically had blind faith in my ability to get the job done.  After we made our first film, a short called Five Minutes, Mr. Welles in 2005, I realized I actually liked producing and wanted to stick with it.  And I think he realized I could handle the pressure and agreed to keep me around.  So… that is how it all began.

MM: This has been a busy year for you as executive producer on Ipso Facto and The Vanishing City as well as producer of The New Tenants. How did you got involved in The New Tenants, specifically?

Hampson: My involvement in all of these films actually stems back to a movie I produced called Don’t Go in the Woods, directed by Vincent D’Onofrio. It is a horror musical that we shot two summers ago about a band that heads into the woods, hoping for some peace, quiet and inspiration while writing their new album. Some groupies follow and join in the fun. As with all horror films, there is a killer on the loose and in the span of 90 minutes, people sing some songs and then, ultimately, die some pretty gruesome deaths.  It’s awesome!

While we were shooting the slasher, I became friendly with Sam Bisbee, who wrote all the amazing songs for Don’t Go in the Woods.  A month after we wrapped, he called to tell me he had this script called The New Tenants.  He was going to produce it for Park Pictures and asked if I would consider coming on board as his co-producer.  I read the script and loved it (with David Rakoff doing the adaptation, what’s not to love?) and 12 hours later, Sam, Joachim Back (the director) and I were sitting at a coffee shop, mapping out a plan as to how to get this movie made.  I think we prepped for a little over a month and come December 2008, we were rolling camera.  It all came together very quickly and we could not be more grateful for how well the movie is being received.

MM: I found it interesting to see your career spanned the documentary & narrative films – how is your work different on each?

Hampson: I think my work for each film is dictated by the requirements of the project.  For the documentary, most of the footage had already been shot by the time I came on board.  My job, for the most part, was to give notes upon notes after watching each new version of the film.  We probably watched four or five rough cuts before the project started to feel like a real film.  With the narratives, my job was a bit more intense.  Because I was involved from day one, I had my hands in everything, from cast readings, to bringing the crew on board, securing the equipment, helping with all the contracts and paperwork, getting permits, finding locations.  I slept a lot less when I was working on the narratives.

If I had to pick, I would say the narrative films are my favorite.   There is something magical about helping to turn someone’s words, some well-written, made up idea, into a movie.

MM: Has anything changed as a result of the Oscar nomination for The New Tenants?

Hampson: I am normally a little grumpy in the morning, so that fact that I wake up with a huge smile plastered to my face is the main change.  Everyone associated with the film has been in a pretty great mood since the announcements were made and that is nice.  The Oscar buzz will come and go, so we are just trying to enjoy this while it lasts.  If anyone is going to have a changed life from this nomination, it is probably Joachim and deservedly so.  He did a great job directing this film and I am sure people will recognize his talent and want to him to direct movie after movie.

MM: Do you have an interest or thoughts on the film industry in RI, specifically the film tax credits?

Hampson: My opinion is going to be skewed because of my involvement in the industry, but I think it would be a mistake to revoke the tax credit. I understand that times are tough and cutbacks are part of the deal, but when a movie or television show shoots in RI, it brings with it key crew members, actors and an office staff who, while they are in town, spend money on things like restaurants, hotels, clothes, vendors.  A production can offer potential employment opportunities for Rhode Islanders as well.  Many times, the company hires local union members to work in the various departments, like wardrobe or camera or as a teamster. Yes, RI is giving away some tax benefits, but I really believe it gains something in return.

MM: What films do you have currently in the pipeline?

Hampson: I have a few movies in development.  One is a script called Mall.  It is based on a novel by my friend Eric Bogosian.  We are in the very beginning stages of trying to get that off the ground.  Also, a film called Johnny and Me, written by Sam Bisbee and Joe Vinciguerra.  Vincent is going to direct that.  It is a father/daughter story about a girl of 18 who comes to America, wanting to meet her dad for the first time.  Upon meeting him, she discovers her father has Asperger’s Syndrome which squashes her hope of building a normal father/daughter relationship.  Instead, she discovers the only way to establish a relationship with him is through the music and lyrics of Johnny Cash.

I have also read a few scripts by an amazing writer named Adam Kline.  He is extremely talented and I am hoping to find a way to work with him in the future.   Basically, I am open to anything and excited about the things I have lined up.

MM: Any advice for readers who are aspiring producers?

Hampson: I would say just get out there and start working in the industry, in whatever capacity you can.  You have to get your foot in the door and work your way up, so don’t get discouraged if things don’t happen right away.  A lot of it is luck, but I would also say pick good material.  Try to work with good writers, actors, crew and directors.  Surround yourself with talented people.  It makes your job that much easier.