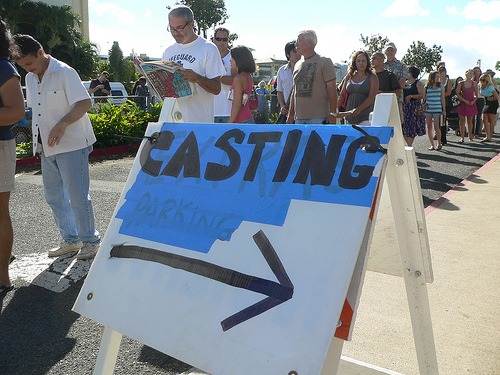 To Pay or Not to Pay: The Debate over Casting Fees

When Mullen/Kalivoda Casting (M/K Casting), an established Florida-based company arrived in Boston a few months ago, they never anticipated the mini-firestorm of debate that greeted them. At the center of the debate was a $25 fee that M/K Casting was charging at the open calls they were holding. NewEnglandFilm.com talks to them and several other casting directors across the country to help gain insight into what actors should look for when registering with a casting company.

When Mullen/Kalivoda Casting (M/K Casting), an established Florida-based company arrived in Boston a few months ago, they never anticipated the mini-firestorm of debate that greeted them. At the center of the debate was a $25 fee that M/K Casting was charging at the open calls they were holding.

Katie Kalivoda feels that people misconstrued the words in which they marketed their registration for their Extras Database. She told NewEnglandFilm.com that they don’t hold “open casting calls,” they hold “open calls.”

“Our $25 fee provides background talent with a wonderful opportunity to meet a new casting director in town, have professional photographs taken for their database profile, and to listen to and interact in a workshop session with the casting director,” Kalivoda explained. She stressed the difference between extras casting and principal casting: “Belonging to our optional extras database is separate from principal, or main character, auditions. Talent interested in auditioning for principal roles are welcome to submit their headshots and resumes for consideration in upcoming projects.”

According to Kalivoda, this $25 fee, sometimes referred to as a digital image processing fee, is standard practice among casting companies, and cites Central Casting (www.centralcasting.org), one of the oldest and largest background casting companies, as an example. She also points out that the Screen Actors Guild lists casting companies on their website that charge these same fees (www.sag.org/files/documents/la_bg_cstngagt.pdf).

So, why the outrage? What exactly are the standard practices of casting companies? We spoke to several casting directors in different parts of the country to help gain some insight into what actors should look for when registering with a casting company.

Ken Lazar, owner of Ken Lazar Casting (www.kenlazercasting.com) in New York City, has been in the business of casting for 17 years. He feels that it’s vital for actors to understand the difference between talent agencies, managers, and casting companies.

“I don’t represent talent. We (casting directors) get our jobs from production companies and ad agencies.” However, Lazar doesn’t charge talent registration fees. “I don’t believe in charging an actor to be able to send their headshot/resume for me to keep on file.” He said he is aware of agencies that do charge this fee, and described one that he knows of, located in New York, called the Actor’s Connection. “An actor can pay ‘x’ amount of dollars to have a one-on-one, five minute meeting/audition with an agent or casting director. At those events, an actor can submit headshot/resume as well as ‘show what you can do’ type of thing. But I stress, an actor should only do this when they know they have a polished performance.” Lazar provides information and tips for actors at http://www.facebook.com/pages/New-York-NY/Ken-Lazer-Casting/90410494928?….

Adrienne Stern, of Adrienne Stern Casting (http://www.AdrienneStern.com), also in New York, is adamant about casting companies not charging any kind of fees to talent. “I don’t ever want to profit from talent walking into my audition,” says Stern. “What I do is bring in selected talent from the established agencies. You are speaking with casting companies that do extras casting and want volume. The business I am in and the one they are in are two different worlds. No casting director with an outstanding reputation in the entertainment industry would ever charge an actor to audition. And we don’t register talent either. Each project is cast according to the needs of the producer and director.”

NewEnglandFilm.com also spoke with Diane Heery, owner of Heery Casting (www.heerycasting.com) in Philadelphia. Heery, with over 15 years of casting experience, reiterated Ken Lazar’s comments about understanding the difference between a talent agency and a casting company. “A casting company,” said Heery, “does not get paid by the actor. We get paid by the producer to find the right talent for their project – no matter where we might find them. Thus we have no allegiance to any particular actor. An actor never pays anything to audition for a job – even at an open call.”

Heery also talked about the website listing fees that companies are charging fees for. “Although not technically fraudulent, the actor needs to be aware of what are the typical fees for listing their info. It really is buyer beware. You might spend to put your info on a website that no one uses or looks at! You wouldn’t be getting much for your advertising dollar there.” When we discussed the registration digital image processing fee that a lot of companies are charging, including those listed on the Screen Actor’s Guild website, she acknowledged that prevalence of this fee. “SAG seems to be okay with the fee, as long as it stays nominal, $25. The problem occurs when the actor begins to get pressured into ‘upgrading’ their profile for $150 to $500. So, again, it is buyer beware.”

Ellen Jacoby has cast over 230,000 performers in her career as a casting director. Owner of Jacoby Casting International (http://www.ellenjacobycasting.com/), based in Miami, Jacoby is strongly against charging actors to register. “Casting directors do not charge talent anything! On open calls or otherwise – it is a no-no.” Jacoby also advises actors to do their homework, “The Internet is a great tool but, unfortunately, it seems there is buyer beware out there, so it becomes necessary to do thorough checks on these. I hold many, many open casting calls, where thousands of people come. It is free and should remain so.”

In Detroit, MI, Carrie Ray Casting (http://www.carrieraycasting.com/) offers ten years of casting experience. Carrie Ray doesn’t charge for registration and offers this advice: “Casting directors should not charge actors anything because they work for production companies and do not represent any actors. Extras casting companies sometimes do charge a one time fee to register usually around $20, although not all do. Talent agencies should not charge actors anything to represent them. They get paid commission when they actually get the actors work.” Ray also adds, “Since there is no union governing casting directors, they can really do anything. The biggest question should be, ‘Are they actually getting legitimate work for their talent?’ If they are, then maybe a $25 isn’t that bad, but I personally still feel it is unnecessary. There are different opinions on this.”

Meagan Lewis, of RPM Casting (http://www.rpmcasting.com), based in New Orleans, does both principal and extras casting. She has provided extras casting for several films shot in the Boston area. Although she personally does not charge a registration fee or image processing fee, she sees nothing wrong with casting companies that do. “It’s expensive to maintain a large database, plus business overhead,” says Lewis. She feels that $25 is a minimum investment for an actor to make compared to all the other investments – headshots, wardrobe, acting lessons, etc. “Plus,” Lewis adds, “It’s a tax write-off.”

So, although many casting directors disagree with the open call/image processing registration fee, there are many companies that do charge. If you’re an actor considering registering with a casting company that charges a fee, here’s some advice you can follow:

1. Do your homework. See what productions this company has cast in the past.

2. Check with your state’s film office or SAG office to see if there have been any complaints about the company.

3. Ask other actors what, if any, their experiences have been with the company. Do they deliver?

4. Take advantage of the free tips and advice on the different social networking fan pages that a lot of the casting companies now have.

Also see Influx of Studio Pics Forces Actors and Casting Agencies to Grow from October 2009 with interviews from local actors and casting studios on casting fees and other local issues.

Also see Influx of Studio Pics Forces Actors and Casting Agencies to Grow from October 2009 with interviews from local actors and casting studios on casting fees and other local issues.