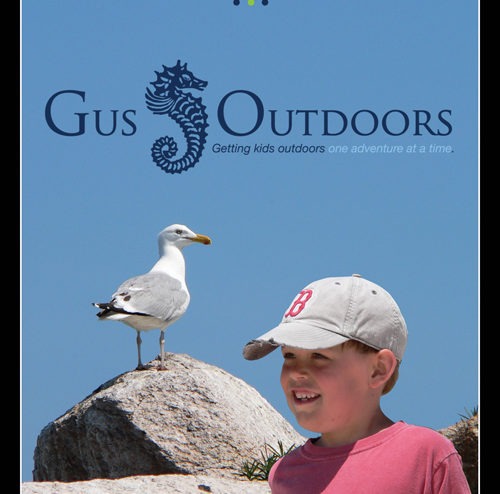 Exploring the Great Outdoors with Gus

Share
Rhode Island filmmaker Sean Nightingale teams up with his six-year-old son Gus on an exploration of nature in the series Gus Outdoors. The first installment Gull Island, which screens this month as part of the first-ever Providence Children’s Film Festival, takes viewers to a seagull nesting location in Rhode Island to learn about how the birds hatch and survive.

Ten years ago, Rhode Island filmmaker Sean Nightingale gave up his freelance work on National Geographic documentaries to find a real job and to have a family. Meanwhile he bought a prosumer video camera to use on his scuba diving trips and slowly began to accumulate enough footage for his own documentaries: Exuma Park about the oldest marine park in the world located in the Bahamas and Watery Graves: Home Sweet Home about scuba and wreck diving in Rhode Island. In his latest project, he teams up with his six-year-old son Gus on an exploration of nature in the series Gus Outdoors. The first installment Gull Island, which screens this month as part of the first-ever Providence Children’s Film Festival, takes viewers to a seagull nesting location in Rhode Island to learn about how the birds hatch and survive.

Michele Meek:: Tell me a bit about your inspiration to make Gus Outdoors.

Sean Nightingale: Gus was my inspiration. He’s a huge Jeff Corwin [host of Animal Planet shows] fan. He used to mimic Jeff Corwin’s adventures and literally re-created what he saw on TV. It was comical watching a four-year-old ‘Jeff Corwin’ running around the yard – he even dressed the same. I was so entertained by Gus I began to think others would be too.

MM: How much of it was scripted and how much is spontaneous?

SN: I can’t say it’s completely spontaneous, but then again I’m working with wild animals and a six-year-old so how much can I really predict? I do write a skeleton script ahead of time so we have a basic plan in place. However, about 90% of that original script is rewritten through the course of filming and editing.

MM: I actually found the film fascinating since I’m not a huge fan of seagulls (who often disrupt my beach lunch) but this gave me a whole new appreciation of the birds. What made you pick Gull Island as your first topic?

SN: I needed a location that I could get to easily on the weekends and that would keep the costs down. The subject matter also had to be predictable. I had been out to Gull Island several times and had a general idea of when the gulls would be nesting so I figured that was a good enough guarantee that the episode would get completed. Admittedly, the subject matter was questionable knowing most people think of seagulls as flying rats, but when the chicks hatched Gus’s excitement validated the whole project for me. After all, how many kids have formed an opinion on seagulls? Then I took it one step further, how many kids have formed an opinion on nature? And that’s the essence of Gus Outdoors, we want to have kids learn about, respect and care for the outdoors so when it’s time for them to form their own opinion, it’s a positive one.

MM: Is there any creature Gus isn’t willing to explore or touch?

SN: The idea of Gus Outdoors isn’t about touching a wild creature. It’s more about respecting them from a safe distance. The safe distance is determined by our subject matter and how fast Gus can run. Right now we want to try to explore creatures that are found in our backyards whether the kids are from Rhode Island, New York City or the Bahamas. If a child walks outside with a curiosity they will find an adventure. Gus is fine picking up bugs, caterpillars and spiders, but it took a while for him to want to hold a snake or a lizard.

MM: I really noticed that all of the ‘narration’ was through Gus’s voice – can you tell me a bit about the decision to present things that way?

SN: It is very important to me that Gus thinks of it as his show and not just his Dad’s show. So it was always my intention that he be the narrator. I felt that the kids watching Gus Outdoors would get more from hearing Gus speaking rather than an adult. If you have seen any of Sir David Attenborough’s nature films you will see the template we used for Gus Outdoors – that and a hint of The Jeff Corwin Experience. Hearing Gus’s narration ties into the shots where you see Gus with a creature. This is critical to making the program feel alive and real.

Having Gus do the narration also gave me the opportunity to sneak in big words occasionally to keep the level of learning high. If Gus can say “regurgitation,” any kid can say it and they have a visual of the behavior to associate with word. How cool is it to hear a kid use the word regurgitation and be able to tell you what it means?

MM: It seems from the length and the serial nature of the film that you intended it for television – is that right? If so have you had any luck with that?

SN: Right now my focus is to finish episode two. Ideally we hope it will end up on television (Gus really wants it on PBS), but are open to alternative outlets like straight to DVD, the Internet or school programs. Once episode two is ready I will go into full marketing mode.

MM: Tell me a bit about episode two.

SN: I’m really excited about the second episode, Lizard Town. We filmed on two different trips to the Bahamas so Gus is five- and six-years-old in this episode. Gus takes us to visit with iguanas and lizards then ventures underwater where the Bahamas is truly diverse and shows us all kind of marine creatures. Right now we are wrapping up Gus’s voice over and waiting for the music tracks from our music man Adam Theroux. We are trying to have it finished by April.

Gus Outdoors will screen as part of the Providence Children’s Film Festival on Saturday, Feb. 13th at 12pm at the Metcalf Auditorium RISD Museum. There will be a Q & A with Sean and Gus afterwards. For more information visit www.gusoutdoors.com and www.providencechildrensfilmfestival.org.

Gus Outdoors will screen as part of the Providence Children’s Film Festival on Saturday, Feb. 13th at 12pm at the Metcalf Auditorium RISD Museum. There will be a Q & A with Sean and Gus afterwards. For more information visit www.gusoutdoors.com and www.providencechildrensfilmfestival.org.