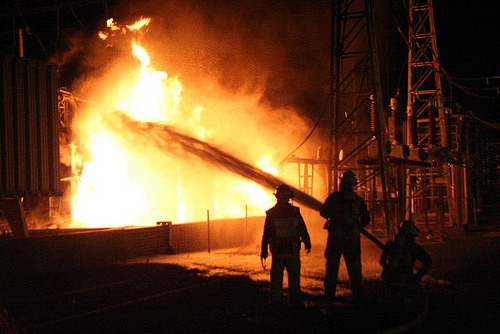 On the Set: Everything That Could Go Wrong… Did

Share
Things go from bad to worse to worst to whatever is beyond worst in this dramatization of actual events.

I was an Assistant Director (AD) for a recent short film shoot when I realized that some productions are run a bit tighter than others.

It started in the morning. An actor gagged as she sputtered hot water onto her blouse. ‘What is this?’ she asked her attendant production assistant, ‘This isn’t coffee! It’s tea!’

The production assistant froze like a deer in the headlights of a Metallica bus. ‘T- there was just the instant kind,’ he said, ‘and I remember you saying that you didn’t want instant—’

She shoved the cup back at him. ‘I’d prefer instant to tea! Try again!’

Witnessing this, I walked up to the actor, Claudia Bankhead, a girl with the focus of a furious elephant and the mouth of a harpy. In spite of this, her acting was impeccable.

I said, ‘Claudia, why are you yelling about coffee?’

Her answer was disarming. ‘I do it for you! Do we have time to waste while Jim or John or Jack—’

‘…goes in search of what I asked for in the first place?’

I sighed. ‘We’re under a time crunch, but keeping spirits up and yelling down would help pull everyone together.’

Tim Rogers, my director, ran up to me. ‘Hey, the camera’s on fire.’

I ran to the Arri to find that it was, indeed smoking. ‘Unplug it!’ I ordered, and the smell of slightly tangy burnt film wafted through the sound stage.

I turned to Tim. ‘How did this happen?’ Tim was mid-shrug when our production designer, the talented Jennifer Walsh tapped me on the shoulder.

‘Hey, the camera guys are smoking up behind the set, and we can’t return the curtains to the rental house if they smell like pot.’

The good news is that the camera guys weren’t smoking pot after all. The bad news is that they were smoking crystal meth. I grabbed the pipe out of their cold fingers. ‘We have to focus, here,’ I yelled, ‘We’ll have time for fun and games once the shoot’s all wrapped up!’

On the other side of the set, Tim Rogers yelled for me. They had opened up the Arri, and a tangled mass of melted film spilled out. Tim held up a fistful of gloopy film.

‘We opened it up and all of this came out. Can you fix it?’ he asked.

I glanced at my watch. ‘We should have been done with scenes one, three, and four by now. I need those camera guys out from behind the set and a new roll locked and loaded. Where’s Ross?’

Tim volunteered, ‘I can take over for Ross. He’s probably busy.’

I said, ‘Busy with what? He’s the cinematographer!’

Tim shrugged. ‘Yeah, but you know.’

I turned back to the set. ‘Can we get on camera, please?’

The cameramen trudged out from behind the set and one of them picked up a sandbag from where it sat on one of the flats. ‘Check it out,’ he said, ‘It’s a giant hackey sack!’

A door slammed. Alan Ross, stormed over to the camera and regarded its slightly burnt state. He wheeled to me. ‘What the hell happened? Where’s my roll? Why haven’t we started?’

I said, ‘The camera caught fire. Why weren’t you behind it?’

Ross said, ‘Stacy and I just had a major blowout. I don’t know if we can expect her in today.’

I pointed to the camera. ‘She shouldn’t be here at all! Can one of your guys clean this up and reload in five? We can be back on schedule by noon if we hurry.’

Claudia piped up, ‘I do nothing without my coffee.’

Someone shouted, ‘Whoops!’ We all turned around and one of the flats fell towards us, smashing onto the set, shattering a vase and obliterating a telephone set.

The production assistant who was returning with Claudia’s coffee set her cup down and jumped onto the floor in an attempt to reset the flat. ‘I’ve got it. Little help?’

Claudia muttered, ‘How long does it take to bring me my coffee first?’ as she walked over and claimed her cup in a matter of seconds.

I helped the PA reset the flat, the camera guys fell in behind us, and Ross adjusted the lens. Our actors were ready to go within ten minutes, and everything was fine.

Ross hit the switch. The camera didn’t turn on. I said, ‘We unplugged it before.’ Ross plugged it in. We shot about 11 minutes worth of scenes over the next couple of hours, and made good speed.

Ross opened the camera. They hadn’t loaded a new reel since they had removed the damaged film. We had shot precisely nothing over the past two hours.

Tim turned to me. ‘What do you think we should do?’

The rest of the day went without a hitch, unless you count our order of 10 pizzas that were accidentally delivered to the medical supplies lab next door.