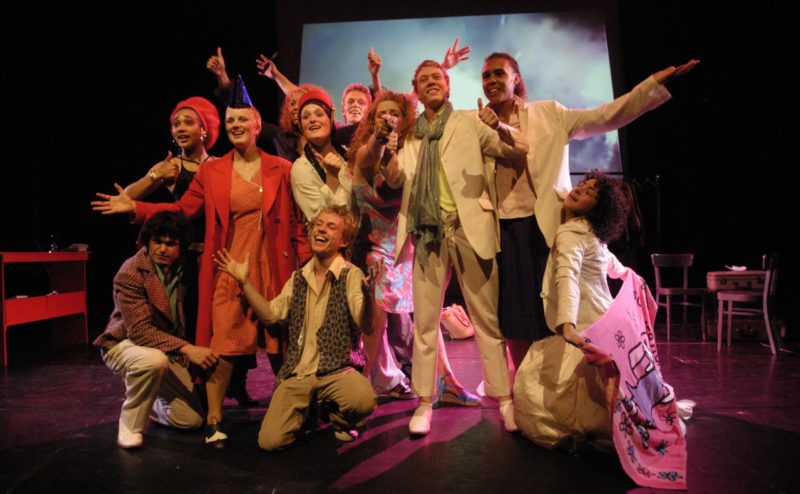 The Boston Jewish Film Festival (BJFF) has the challenge of finding films that give a face to complex issues, running the spectrum from family, identity, immigration, and inter-cultural and inter-religious questions. This face comes in many guises – characters in a comedy, documentary, fiction, claymation, etc.

I have a unique relationship with the Boston Jewish Film Festival; I have worked, both as a volunteer and at times as staff, with the festival since 2003. It is this face – this humanizing of issues – that inspires me to keep working with the festival.

Volunteering at the festival involves usher duties after work or on the weekends, such as tearing tickets, handing out fliers, even telling people where to find the bathroom. These are easy tasks after a long day’s work, and hanging out at the movies is one of my favorite things to do. Over the years I taken on more responsibilities and my work morphed into various roles, such as organizing events to reach out to new audiences, working on the website and in the office, screening some films, and managing theaters.

The 21st annual Boston Jewish Film Festival runs from November 4 – 15, 2009 in and around Boston. This year’s festival screens 40 films in 9 locations and includes artists from 15 countries, in 14 languages. This year’s films relate to a common theme of “home” from various perspectives.

I talked with Artistic Director Sara Rubin about the festival’s diversity. Jaymie Saks, Managing Director, also spoke with me to create a personalized “how to” guide about ways to get involved.

Sara Rubin began working with the festival in March 1997 as its Executive Director and became the Artistic Director in May 2009. “I have actually been coming to the festival since the very beginning [in 1989],” she says. According to Rubin, the diversity of the BJFF’s programming “starts with the audience. We have a large Russian audience, not all cities do, and an LGBT audience.” Andrey Khrzhanovsky’s Room and a Half is a Russian language film, which at first glance is a biography of Josef Brodsky. “It’s more surreal than that,” says Rubin. “It gets at the origins of the imagery in his poetry. It’s terrific.”

“We do a very thorough search of both Jewish and non-Jewish films and sometimes we turn up real gems. Sometimes we’ll show a smaller film that may not necessarily draw a huge audience, but [if the quality is there] it deserves to be seen.”

The BJFF partners with other film and cultural groups to sponsor and promote diversity. Some include the Independent Film Festival of Boston, Women in Film and Video New England, Roxbury Film Festival, Boston LGBT Film Festival, and the Goethe Institute.

“Themes emerged as we screened the films. This year a theme for searching for home emerged strongly. It’s not a criteria, but we tried to tie it in,” Rubin said. “Sub-themes are also part of the festival this year,” including Latin American films and French comedies.

Jaymie Saks became Managing Director in May 2009 after serving for five years as Chief Operating Officer of the Jewish Women’s Archive, where she worked with the BJFF on a few projects. She also previously worked for the BJFF as a theater manager and ran guest services.

We created a personalized “How to Guide” for navigating the film festival. The festival is especially reaching out to the following:

People in their twenties and thirties:
This year, among other tasks, Saks is charged with reaching out to new audiences, particularly the 20s and 30s crowd. She recommends planning ahead with the newly revamped BJFF website. “We have re-hauled the website this year to make it more interactive. You can create and download your own festival calendar with films that you want to see. You can e-mail to your friends.” The festival also offers Reel Pass, a discounted festival pass good for three films, and especially geared for this age group.

Filmmakers wanting to connect with others:
The BJFF program book highlights panels wherein directors, writers, and producers will be attending and/or speaking about their films.

Members of an organization, such as a MeetUp or special interest group:
Saks suggests Sons of Sakhnin United for soccer fans. The film follows Israel’s leading Arab soccer team with their Jewish coach through an historic season following their victory in the Israeli State Cup. “This is one of my favorites,” says Saks. Kristine Lilly of the Boston Breakers will be at the screening.

Theatre fans might be interested in How to: Be or Not to Be, a documentary about a Dutch theater troupe that teaches tolerance.

Those without passes who want to see a particular film, but it’s sold out:
There is a stand-by line for sold out films. Although not guaranteed, typically, the stand by line is able to get in because not every seat reserved for pass holders is used.

The Boston Jewish Film Festival has grown over its 21 years; audience attendance has grown to 12,000 annually. “We’ve become more professionalized and more critically respected. It’s important for us to be part of Boston’s film community,” says Rubin. “We strive for more. We want more people to feel welcomed and included.”

The BJFF sponsors other events throughout the year including a Martha’s Vineyard summer series, a work-in-progress screening, and the springtime Encores series, which reprises films, based on their availability, from the festival.

I started volunteering with an idealized notion of giving something back, but I always come away feeling like I’m gaining more. I’ll be at the festival again this year, either managing a theater or tearing tickets. If you’re lucky, I may even direct you to the bathroom.

Visit the BJFF at http://www.bjff.org

Visit the BJFF at http://www.bjff.org