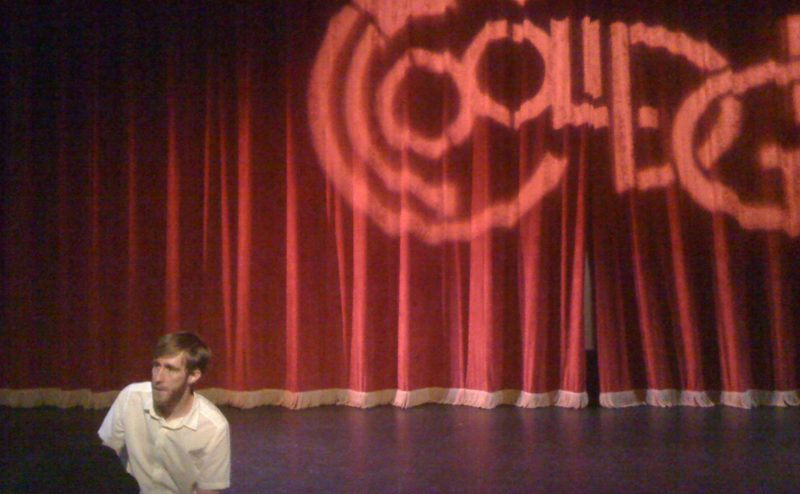 On September 13th, filmmaker collaborative Connect the Docs hosted documentarian Sean Flynn at the Coolidge Corner Theatre in Brookline. Over the course of the evening, Flynn discussed his documentary work with Principal Pictures and talked about the art of pitching work to commissioning editors, agents, and producers at various festivals.

According to Connect the Docs founding member Rhonda Moskowitz, “Sean is becoming the master at pitching.” That’s why Moskowitz invited Flynn to speak about the success he has had pitching projects, particularly with his filmmaking partner Beth Murphy.

Flynn, who had recently pitched his work-in-progress Promise of Freedom at the Independent Feature Project (IFP) and won the Fledgling Award, said, “These were individual meetings about 20 minutes long, so you have to go in prepared. These are people who are in back-to-back meetings all day, so you have to grab them immediately. I’m talking in the first sentence, and you must be as concise as possible.

“We would literally do 20 seconds. [My co-producer] Beth would give the elevator pitch while I set up the laptop with our trailer. We’d spin the laptop around, give them the headphones, sit there awkwardly for our seven-minute trailer, and try not to look at their reaction too much. Generally, they have a lot of follow-up questions and suggestions, after which we try to squeeze in other elements of the pitch and story. It’s really just a conversation. It’s more than just talking, though. You want to develop a relationship with the funders and broadcasters, get to know them and have them get to know our project.”

Flynn mentioned one thing that surprised him, “You think that 20 minutes is a long time but with all of these pitches, time goes quickly.”

“Commissioning editors have these budgets and make the decisions to greenlight projects. It’s good to be on people’s radar. We’ve noticed a lot of benefits in the long run.”

When asked if there was any sort of “secret ingredient” to a good pitch, Flynn replied, “You have to exude passion from every pore in your body when you’re sitting down with that person. Make them believe that you’re going to make it with or without them, but that it would be great if they could be a part of your team.

“I really like pitching with Beth. She tends to pitch the story and I tend to jump in on the distribution and outreach side, how we’re going to use this film to make the biggest social impact. We didn’t have anything scripted. There are certain talking points that we kept falling back on, honing it with each new meeting. Our pitch was better and better each time we did it, but it’s a steep learning curve.”

Addressing how a filmmaker could stay memorable to a potential buyer even among dozens of other hopefuls, Flynn’s advice was, “Give them a copy of your treatment, a DVD, and a business card. Straightforward with no frills is usually a good approach. These are good things to have on you anyway, as you can have them at the ready for an impromptu pitch. You have just enough time to hand them a DVD and a business card, and you never know where that will go.”

Flynn cautioned, however, that relying on having 20 minutes is not always a sure bet. “This past late April, there were pitching sessions at the Toronto Documentary Forum. There would be 30 commissioning editors at a table, sitting there for two days. To observe the sessions alone would cost you $700 to $800. These were held completely separate from the rest of the festival.

“All of these teams stand up in front of the editors, with screens on either side, and show their trailers. You have seven minutes for your trailer and verbal pitch. You really have to cut it down and get your point across quickly. Then, they spend 13 minutes going around the table, giving their two cents. Some projects get a lot of support and others are shot down completely.”

However, there are other opportunities for filmmakers with a strong sense of social justice. Flynn went on, “They added a new section to the Toronto Documentary Forum called Good Pitch. It’s more supportive and focused on films that have the potential to make a social impact. These are documentaries that have this advocacy component attached. In addition to the commissioning editors and funders, they also bring non-governmental organizations and nonprofits along to hear your pitch. These organizations may also be poor, but they’re equally passionate about your issue, and they have this connection to their constituents such that an ideal arrangement can be made.”

To sum it up, Flynn said, “These sessions are really about forging connections and putting yourself out there. In most cases you’re laying the groundwork at the right time. You don’t want to start generating interest too soon. Try to utilize cross promotion on a website or start organizing rough cut screenings for various groups. The more that you practice your pitch, the more honed it’ll become, so really work hard on putting it together.”