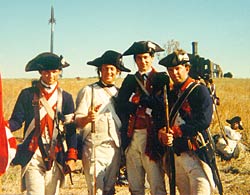 Share
This summer, Grown-Ups, The Fighter, Furry Vengeance, The Town, Zookeeper, and Wichita all set up shop in Massachusetts. With the high demand on casting agencies and actors, how is the system faring?

Most big budget Hollywood films utilize more than 1,000 background performers over the duration of a shoot. For one week this past July, three major films were shooting in the Boston area at the same time. Casting agencies clamored for extras. Email blasts and calls for actors went out multiple times per day. There was more than enough work to go around; could it possibly have been too much?

According to representatives from several area casting agencies, as well as quite a few actors, both union and non-union, there is no such thing as too much work. But many who spoke with NewEnglandFilm.com had suggestions for how to improve navigation of the constantly changing and rapidly growing New England film industry, especially the casting process.

The first contact actors usually have with a casting agency is the submission of headshots and resumes. Yet agencies differ in the way they accept submissions. Many actors we spoke with expressed some frustration in not knowing how to gauge the status of their submissions — specifically how often these items should be sent, and what is the proper protocol for follow up?

Anne Mulhall of LDI Casting, Matt Bouldry of CP Casting, and Jodi Purdy-Quinlan of South Shore Casting all keep records with hard copy headshots and industry standard resumes. Mulhall suggests that in addition to sending the headshots, have postcards with your headshot printed on them, and use them as follow-up. Send a card with a note about a recent job, or relevant updates, for example. She says it’s a way to keep “your face in front of me.”

Bouldry suggests that actors also utilize networking sites. “I like the layout of NewEnglandActor.com and have cast from that site quite a few times,” he says.

Purdy-Quinlan advises actors not to assume that because your headshot and resume are on file that casting directors will remember you. “Go to the open calls,” she says, “because these are the photos the producers will see.”

Angela Peri of Boston Casting is in the final stages of converting to a totally online database, which she says is more efficient. With it she can enter the criteria she’s looking for and the database provides her with potential candidates.

RPM Casting has come to the area from New Orleans specifically to cast for Grown-Ups and Zookeeper. According to founder Meagan Lewis, they accept their headshots and resumes via email.

Another issue that surfaced when talking with both actors and agencies is the confusion that can punctuate short-notice casting of background actors (also called extras). It’s common for casting agencies to send email blasts requesting background actors for the next day. Each agency has a unique way for actors to respond and when those methods aren’t followed precisely, both parties grow frustrated and impatient.

According to Anne Mulhall, when you answer an email blast for background work and you’re told you’re on the list, the casting director’s “hands are tied” until they get the final okay from the production team. Only then can the casting director relay the specifics of the next day’s shoot to those cast. “There might be all kinds of production changes taking place within hours of when someone is told they’re on the list. I have to wait until the final decision is made by production before I can let everyone know. Believe me, I want to go to bed too!” says Mulhall.

When responding to email blasts, Meagan Lewis advises actors to “read and follow the instructions. Don’t provide more and don’t provide less than what is being requested.” And most important, she adds, “Don’t call the office. Wait for email confirmation.”

Most of the actors we spoke to said they understood that it’s frequently impossible for agencies to provide anything but last minute instructions, but the hours of waiting between answering the call and getting location specifics can be exasperating. Several actors suggested that the casting directors consider sending out an email to everyone who is tentatively booked for the following day, just confirming that they are still waiting to hear back for final details from the production team.

Actor Dan Yonah Ben-Dror Marshall says that he understands that eleventh-hour changes are part of the industry, but communication is the key. “The more armed we are with the information the agency knows and can share with us, the better for everyone.”

Actor Skip Shea suggests that agencies use alternatives to email or additional forms of communication. “I think one way things could be streamlined would be to use text messages for call times,” says Shea, who underscores that actors working on another set may not be near a computer or may not be able to access email on their cell phones. “They would only have to make one call [or text] and everyone would get it.”

Many persons interviewed had differing opinions about what entity should offer acting classes. The four local casting agencies suggested that actors take their classes and workshops. Anglea Peri shared her reasons: “Your acting will be better and stronger and you’ll learn set protocol.” Anne Mulhall says, “These classes help you learn the craft, showcase your talents, and put you in front of the casting directors.” Both Matt Bouldry and Jodi Purdy-Quinlan shared similar sentiments to Peri and Mulhall.

According to actor/comedian Mike Koutrobis, “If you want to learn to act, don’t go to a casting agency to learn. Go to an acting teacher. If all you want is background extra work, then sign up for classes with the agencies.” Koutrobis said agency classes should be viewed more as “auditions” and a way to show the agencies what your capacity as an actor is.

Dan Yonah Ben-Dror Marshall does both. “My experience is that I’m much more comfortable taking agency classes when I’m in good form. I take classes for my training elsewhere, and use the agency classes, which are taught in a very condensed format, as a way to network.”

Actor Mike Bash thinks that casting agencies would benefit from trying a different version of networking. “Boston has an extremely vibrant theater and independent film scene with hundreds of theater shows and films created right in town every year, with tons more in the surrounding cities. Some of the casting directors are definitely visible in the community but it would be great if more could make it to see the shows, go to screenings and really get to know the talent that’s here.’ he says.

Local producers and directors likewise scout for acting talent. Bill Millios, founder of Back Lot Films, Inc., noticed that the increase in production activity has also increased the quality of the regional acting pool. He sees this when he holds casting calls for his films. “The quality of actors at our auditions is impressive,” says Millios.

John MacNeil, founder and CEO of Moody Street Pictures, agrees. “Everyone’s game is improved. A casting agent’s bench is much deeper. They now have secondary players with enough experience.”

Boston-based actor and filmmaker Ted Sherman wants New England to kick its casting expectations up a notch. “The key is getting producers to use our talent pool for principal acting roles instead of flying them in.” Sherman says his production company, Boston Film Productions, has produced several films with this goal in mind.

There will be many more growing pains for all involved as the New England film industry continues to experience a production boom. Meagan Lewis worked for years in Baltimore when that city was extremely active in filmmaking. “The benefits of the trickle down effect — to actors, production companies, tradesmen, caterers, hotels, are fantastic. New England needs to make sure they keep cultivating the film business.”

Jodi Purdy-Quinlan says she has been “diligently getting to know the talent pool in New England. That’s the key right now and for building in the future.”

Actor Mark Perrone recently worked on the set of Wichita. “I’ve lived in Worcester all my life,” says Perrone, “and here I am booked to play an airline pilot, with all the scenes being filmed at Worcester Airport, right in my own backyard.” Like many actors, casting directors, and others who have benefited from the recent influx of production, Perrone wants to keep the short commute.