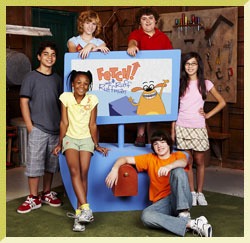 How to Edit for Children’s Television

One might wonder when boredom sets in after editing the same television show for five seasons. Well, if that show involves some documentary-style editing, some studio, multi-camera editing, music, sound effects, improvised narratives, children and an animated talking dog, the answer is — never. I recently spent some time with Arnie Harchik, the senor editor for PBS’s Fetch! With Ruff Ruffman. If you’re not aware of that program it is probably because you don’t have young children at home. Fetch! airs locally at 5:30 pm on WGBH as part of the PBS Kids Go! block.

The premise of Fetch! is deceptively simple. In each episode, some or all of the tween-age (human) cast members embark on a mission assigned by the host of the show — Ruff Ruffman, a talking dog. These missions can take the children anywhere in the state or the country. The kids have no idea where they will go or what the assignment is until they are told by Ruff. The challenges are generally science-based and involve some educational devices. Remember, this is PBS and Fetch! is funded by the National Science Foundation. Over the course of the season the kids earn points for their efforts and one child will walk away with the Grand Prize.

What seems straightforward on the page, however, is anything but. It takes an extremely large squad of people to get each episode of Fetch! on the air. But the purpose of this article is not to get into the logistical quagmire that is production; no, the focus is on postproduction. What does it take to put Fetch! together after the cameras stop rolling? But, I also wanted to find out how they get six kids to interact with an animated character in real time?

One season of Fetch! consists of 20 half-hour episodes. Shooting occurs during the summer months and by the end of production there can easily be more than 500 hours of material. Ten hours of show and 500 hours of raw footage? It doesn’t take a mathematician to understand why postproduction on a season of Fetch! takes about a year from the end of shooting to the time the season airs. That means that the programs airing in the Fall of 2009 were actually shot during the summer of 2008! And, the ratio of footage shot to footage used is only one challenge. What other challenges does the editor face? Glad you asked.

The structure of the show presents a unique editing challenge. On the air the show is broken up thus: 1) A studio segment introduces the kids and their missions. 2) All the kids interact with Ruff in unscripted banter. 3) The kids are teamed up, get their assignments, and off they go. We watch as the kids travel to interesting places and meet interesting people while trying to solve some sort of puzzle or find some kind of treasure. 4) After the challenges are completed, the kids return to Studio G for the last part of the show where points are awarded. That is a streamlined description, but basically for every episode the editor must put together the studio portions, each team’s field assignments, and add the animated characters and then cut all those different elements together into one cohesive whole. Whew!

The field segments are cut documentary-style, very similar to network reality TV shows. “We embrace the jump-cut,” Harchik says. They are basically unscripted and unrehearsed and shot on location with available light and small, hand-held cameras. Harchik cuts around a roving camera, a sound-man in the shot, bad audio, or any other problem that crops up and still tells the story correctly and succinctly to make sure it makes sense to 6-10 year-olds. Harchik showed me a segment he put together for one of the fifth season’s shows. The completed segment runs maybe one-minute thirty, but the raw material he had to work with was well over an hour.

There is another aspect to the field segments that must be addressed by the editor. When and where will Ruff make an appearance? Ruff makes many humorous comments and asides as the kids tackle his challenges. Sometimes they are audio only, other times he appears on camera. The technique allows Ruff to become part of the audience as well as the host of the show. Harchik and the other editors have a specific system in place to create this illusion. After the field segments are shot and the footage is digitized into the Avid, they cut together a rough string out of the story. This timeline is converted to Quicktime and sent via an ftp site to the actor that voices Ruff — Jim Conroy.

In a recording studio in New York, Conroy provides a series of quick improvised lines as he watches the string out. These audio bites are sent back to WGBH and Harchik decides which ones to use and which ones to drop. He then does another pass at the segment, tightening and shortening it without losing any science, story, or entertainment value. Conroy always provides more material than needed and is very good at keeping the jokes targeted to the young without forgetting that there is generally an adult sitting next to the kids watching at home. That same point is something the editors must remember as well. Fetch! is not one of those kid’s shows that wears on the patience of Mom and Dad. Also, at this point Harchik decides where, and for how long, Ruff will appear on camera. These are very important decisions because Ruff will need to be animated for those pieces and the animators need to know — to the frame — how long to make the animations.

Before getting into the animating of Ruff I need to talk about the studio segments because it is back at Studio G, Ruff’s HQ, where the kids actually interact with Ruff. In direct contrast to the field segments, the studio portions are shot in a completely controlled environment. (It is actually the same studio that you see when all those rows of people are answering phones for a WGBH pledge drive.) Once dressed as Ruff’s doghouse, the crew shoots all the studio portions for every episode. It is a four-camera shoot, two handhelds move around as the kids talk, one’s on lockdown of the entire group, and the fourth is for Ruff. “Wait a minute,” you say, “I thought Ruff was an animated character? How can the kids act with a cartoon character in real time?” I asked the same question.

The answer? Cover the eyes and ears of the young ones at home. The answer is… they don’t. Not really. The kids are acting with the voice of Ruff. The afore-mentioned Jim Conroy. He travels to Boston from NY for the two weeks they spend shooting in the studio. The fourth camera simply captures Conroy doing his lines as Ruff in the audio booth. The kids hear him in the studio and he hears their lines/reactions in his headphones. That is how they capture the back-and-forth between the kids and Ruff in real time.

The editing of the studio segments is also done in a different style than the field segments. Harchik uses the multi-cam feature in Media Composer to cut between the different angles that were captured. He drops in Conroy’s camera when he wants to see Ruff on screen. There are also times when Ruff appears on a video monitor in the room with the kids. When using that type of angle Harchik cuts a quick black and white matte in Photoshop, using that to get Ruff onto the computer screen. It may use some different tools for the edit, but the result must still have the energy and dynamic flow that is the trademark of Fetch!. Quick cuts, sound effects, and music all contribute to that goal.

Now, the animation. Ruff is actually brought to visual life in Vancouver by a company called Global Mechanic. They use Adobe Flash to animate all the sections with Ruff or any of the other animated characters from the show. The system to get that work done will sound familiar. Harchik has created a completed offline edit with placeholder graphics where the animations will appear. Each animated clip is assigned a code-number. A Quicktime of the show is uploaded to an ftp site for Global Mechanic. This way the animators will have the length of each clip and its corresponding audio. In addition, they will have the video from Conroy’s performance in the audio booth so they can use his facial expressions for Ruff if need be.

After the animations are completed they are delivered as Quicktime files and dropped into the cut at the correct locations. It generally takes a few months, however, to get the final animations created and approved for an episode of Fetch!. While waiting, Harchik and the other editors simply move on to their next episode. (In addition to Harchik, there are three other editors working full-time on Fetch! — Mark Geffen, Maureen Barillaro, and Karen Silverstein.) They have an off-set four-week system in place where one of them is ready to send a cut of a new episode to Vancouver every Friday.

Wow. I just read that all back and it is a lot of information and I barely scratched the surface of what goes into creating an episode of Fetch!. I didn’t even get into the on-line, music, sound mix, or moving over to HD… trust me, there’s a lot more. But, the main impression I received from Harchik was a sense of pride and enthusiasm for the work. Every episode is different and since each editor sees their individual episodes all the way through from rough-cut to air, they “feel such an ownership of the show.”