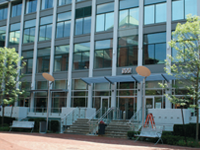 Thinking of taking a class in the Boston area to spruce up your film editing skills? Future Media Concepts, or FMC, has recently moved to an expanded space in its new Kendall Square location.

This organization has grown significantly since its inception in 1994, originally open to provide training solely on Avid. With the passing years, the focus has expanded to include classes on Apple and Adobe products.

The Cambridge spot is one of seven worldwide branches, including the New York City headquarters and offices in Dubai and the Gulf Region. With the new Cambridge location comes the addition of online courses, which feature screen sharing, live sessions, and interactive question and answer. A scan of classes in this format yielded a full inventory of options in Adobe, Apple, and Avid products. Given the efficiency in saving time and the convenience in access, this option is poised to quickly escalate in popularity.

Keri Wilson, the Boston location’s branch manager, noted that the Mac IT and Final Cut classes have been the most popular offered by FMC.

Apple certified instructor Adam Greene confirmed that the Apple creative suite has proven popular with the new release of Final Cut. Also, “the Apple IT classes have been booming. A lot of companies are realizing the value, both functionally and financially, of switching to an Apple-based system, or at least integrating it with their current setup.”

FMC founder Jeff Rothberg noted the same, and adds that there is “continued growth and demand for Adobe After Effects.”

Recently, I sat in on a class for Advanced Final Cut Pro. Like most offered by FMC, the class was three days long, from 10 am to 6 pm. Most classes are taught during the week, though this one started on Friday and continued through the weekend. Each course is usually available once per month. Demand drives the final availability — increased demand can lead to a specially scheduled time.

Topics covered in the advanced class included multi-camera editing, color correction, advanced trimming, filters, nesting sequences, and audio editing techniques. Learning is hands on and proceeds at a rapid pace, so students are best positioned to remember what they’ve learned if they are working on a relevant project and can transfer skills to that project. Otherwise, one risks forgetting what has just been taught.

I have been working on a short film as an experimental piece, and used a few tidbits gleaned from the class in my project. I enjoyed a discussion about the difference in two types of split edits — a J cut (where the audio precedes the video cut), which generally feels more natural than its counterpart, the L cut, (where video precedes audio). I also further explored the concept of Photoshop layers by building compositions with superimposed video clips and motion graphics. It was well worth sitting through the long hours of the class.

The price point hovers at about $1,400 per class, though students always have the option of auditing that same as a refresher, within a certain time frame. Essentially, once you’ve paid and taken it successfully, you can take the same class over again for free. Given that the classes progress quickly to cover a great deal of information, this feature may appeal to some students.

At my seat was a book from the Apple Pro Training Series, which contained every lesson taught in the class. Greene, our teacher, was very knowledgeable of the course material, as he could draw from his own experiences as owner of Green Lens Media. I was one of two students in the class; the other student was preparing for certification in Final Cut.

Participants are often in the classes to improve their craft. However, FMC helps the unemployed as well. Wilson said, “Because we’re an approved vendor for training funded through the Workforce Investment Act, we are seeing several unemployed students hoping to hone their skills to become more marketable.”

Wilson discussed another scenario for which FMC can be a resource — those who are planning a career change. “I’m not sure if it’s due to the economy or the impending studio on the South Shore, but it seems like the perfect time for people to begin making a living from something they really have a passion for,” she said.

FMC classes prepare students to take certification exams in various disciplines. (Certification exams are offered at this facility, in addition to a host of other locations, available for review at Apple’s site.) Wilson explained that getting certified gives students that extra boost when competing for a job: “Being certified can be a key ingredient and will make you stand out to employers looking to hire.” She added that FMC classes can be great for a hobbyist as well. “As YouTube has shown us, everyone has the chance to gain recognition. For someone who enjoys ‘playing around,’ these classes are a great creative outlet.”

Justin Owades, a longtime student at FMC, confirmed this through reports from his network. “I talked to a friend who has been working as an editor in New York and he told me that getting Final Cut Pro certified has helped him get a lot of work.”

This is great news, but when asked if there has been more work in the Massachusetts over the last few years, especially since the tax incentives took hold, the tone changes.

Owades revealed, “No, I haven’t noticed any more work here. I think maybe there will be more work in production once Plymouth Rock Studios opens, but it seems to me like the movies filming here are bringing their own crews with them, and just because a movie is filmed here doesn’t mean the post is done here. The only real increase I’ve seen is in ‘extra’ work.”

Greene’s response to whether or not there is more work in Massachusetts reflected a growing demand from organizations that are looking for a more polished look in video. “My freelance work has moved more from individuals needing my services in editing, production, and writing to organizations and companies.” From his perspective as a teacher, he has noticed “more students coming from companies, as opposed to on his or her own.”

Greene concluded, “The incentives have helped more indirectly to this point. They have generated a heightened interest in film, and having the belief and support of the community that the visual arts and media is a medium here to stay and flourish sows the seeds for success in this industry.”