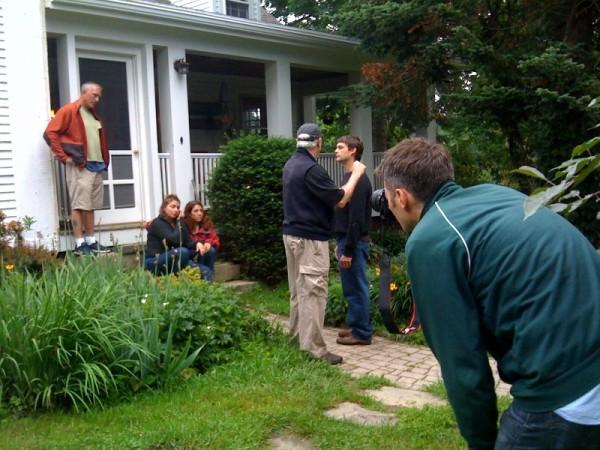 “Crooked Lane” Through the Eyes of RED

Share
Chase Bailey and a crew of New Hampshire filmmakers weigh the pros and cons of using RED to shoot the short film Crooked Lane, which premieres this month at the New Hampshire Film Festival.

Combining the good looks of 35mm film with the ease of pure digital, the RED camera has been sweeping onto movie sets like some dazzling new star, surrounded by a high-powered marketing campaign and sought after by high-profile directors. And, like any high-wattage star, it can also be a little high-maintenance — temperamental and prone to the occasional breakdown.

But for writer-director Chase Bailey — whose haunting, 20-minute dramatic short, Crooked Lane, which premieres October 15th at the New Hampshire Film Festival and was shot entirely on the RED — any on-set quirks were quickly forgotten. “Once you shoot with the RED,” says Bailey, “you’re happy you went through that turmoil, because of what it gives you” — namely, 4K raw files that offer filmmakers an almost limitless amount of information to work with in postproduction.

For Crooked Lane’s director of photography, Patrick Ruth, the best thing about the RED is its 35mm depth-of-field. “You get the same fall-off in focus as you do with film,” he says, and for a more affordable price. “It draws you into what’s in focus, and that was nice for something like Crooked Lane, which is a little more taut, a little bit more mysterious.”

And then there’s the near-immediate gratification that shooting on the RED affords. Instead of waiting the customary 24 to 48 hours it takes for film dailies to be processed,
Bailey was able to review dailies “almost instantaneously.”

“That was awesome,” agrees Marc Dole, the film’s editor and postproduction supervisor. “On Day Two of shooting, I was on the set transferring dailies at one computer, and editing the scenes that had been shot the day before on another.”

“At the end of the production day, I could walk into the studio and see already edited scenes,” marvels Bailey. “When you get those dailies, the important thing for the director, the person who’s worried about the narrative, is the performances. You’re looking for continuity. Not just an actor’s wardrobe, makeup, and hair, but the performance itself. The character’s arc needs to make sense from scene to scene, because you’re creating a story from zero to 10. So it’s very, very helpful for the filmmaker to be able to look at the dailies right away. I loved it.”

Maintaining a taut, suspenseful arc was especially critical on Crooked Lane, a tale of the supernatural. It tells the story of Ava (Ann Cusack), a woman whose young daughter, Morgan (Noa Siegel), vanished 10 years before from the family farmhouse on Crooked Lane. Still haunted by the loss, Ava begins seeing Morgan everywhere — along with another little girl, the eerie, elfin Bailey (Eliya-Quaye Constance), who seems to hold a key to the mystery. When Bailey solemnly tells Ava that she should “look harder for the treasure,” Ava returns to Crooked Lane, determined to be reunited with her daughter, no matter what that reunion might entail.

A veteran producer of such films as The Libertine, which starred Johnny Depp and Samantha Morton, and The Life Before Her Eyes, with Uma Thurman and Evan Rachel Wood (winner of the Grand Jury Prize at last year’s NHFF), Chase Bailey wrote the screenplay for Crooked Lane several years ago as a feature-length film. But when a six-month window opened up in his schedule earlier this year, he decided to revise the screenplay into a short film and to direct it himself, something he hadn’t done for over 20 years. He began putting together his crew, including producers Gregory Smith, Tracey Becker, Mark Constance, Bethany Constance, and Kathryn Soave. Actor Brett Cullen, a friend since their work together on The Life Before Her Eyes, joined the cast and helped recruit Cusack as well. Filming took place in early July, in Portsmouth and Barrington, NH.

“I was ready to experiment,” Bailey says. “I didn’t know if the film was going to be any good. But every day of production, it just kept getting better. The crew, the cast, everybody just put 150 percent into making the film the best it could be.”

For Marc Dole, that meant creating a detailed digital workflow and wrangling a large herd of backup drives, both to safeguard against hard-drive failures and to allow easy file-sharing among the producers. “We had nine hard drives for this project, where most [similar] films would have just one,” he says, not without awe. “That was a huge advantage for us, and it’s because Chase put the resources behind getting them.”

Patrick Ruth was also struck by the production’s professionalism. “I had the support to do what I needed to do, to tell the story the way I wanted to tell it,” he says. On indie films, he adds, enthusiasm sometimes outpaces expertise, “but on this movie, that wasn’t the case. There were people who knew far more than I do, and they were very proficient in how they did their jobs.”

For Bailey, a significant part of the experiment was his choice of camera. “I love checking out new technologies, and about a year ago I began studying the RED,” he says. He liked what he saw and decided to move ahead, despite the camera’s reputation for occasionally powering down without warning — something that Ruth knows about firsthand. He recently served as a camera operator on a movie that featured trained animals, including bears, raccoons, and squirrels. “That was shot with a RED camera, and it shut down a couple of times,” he recalls. “And you really don’t want to keep the bear waiting while it reboots.”

Fortunately, the RED shut down only a few times during the course of the Crooked Lane shoot, and “never during an important take,” notes Bailey. There were some other minor annoyances: persistent fan noise; a lack of volume-unit meters; and a camera-body design that Ruth likens to “a cinder block,” making it less than ideal for hand-held work. For Bailey, these kinds of inconveniences come with the turf. “Any time you shoot a film,” he says, “whether it’s a $100 million film or a $10 film, you run into problems every day that you have to solve.”

“You just need an experienced crew, or one that knows how to overcome problems,” adds Dole. “Working with the RED, that means you have to have a computer technician around, not just somebody who can pull the door off the camera and fix a mechanical problem. That’s second nature to us, so it’s not a big deal. But for some folks it is.”

If it’s second nature to Dole, that’s because, as the head of his own animation and visual effect company, Hatchling Studios (in Portsmouth, NH), he’s long been an early adopter of new technology. “That’s not just because we are geeks,” he says, “but also out of necessity. We have to be on the lookout for what formats are going to be coming at us.”

Working with the RED format means learning how to best extract the vast quantity of visual information contained in its 4K raw files. “When you first get a shot into the computer, it could look as dark as night, but it still has a lot of data in it,” Dole explains. “So you have to get it into the right programs that know how to separate [that data]. Once you do that, you can really start messing around with the color,” mining it for “the deep, rich blacks, the whites with detail that you just don’t get in video.” He calls RED “the closest [format] to film that I’ve seen.”

Patrick Ruth isn’t ready to go quite that far. “There’s just nothing like film,” he says. “It’s much more organic [than digital formats]. There’s something about the grain of the film that matches up with the pores on a person’s face. Skin tones are beautiful.” While he “fully embraces the RED,” he also considers its very ease something of a curse. “It’s democratic because it invites people to pick up the camera and start shooting, which is great,” he says. “The down side is that anyone can buy this camera and call themselves a cinematographer. But to make it look good, you still need to know your craft. You have to know how to light and compose.”

In terms of comparing camera options with similar technology, Ruth mentions Genesis or the F35, “but they run for more money.”

Chase Bailey is now developing a new feature, which he will produce — and which will be shot on 35mm film. But if the decision were his alone to make, he adds, the film would be shot digitally. “The arguments over digital technology are the same arguments that took place over the introduction of sound and of color,” he says. “People didn’t want to move to [the new technology], because they weren’t comfortable with it.” But for Bailey, seeing is believing. The finished version of Crooked Lane is, he says, “very, very close to what I visualized when I was writing and filming it. And the RED enabled that.”