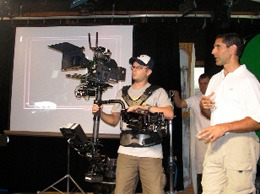 Training a Workforce for the Moviemaking Marathon

Share
As New England attracts more major motion pictures, the race is on to grow a trained workforce. This guide offers an overview of new and ongoing skill-building opportunities to secure work in all aspects of production.

In the sluggish economy, one bright star is the film industry, particularly in Massachusetts. In April 2009, the Motion Picture Association of America (MPAA) ranked the state in the top 10 for film production, outside of California and New York. Currently, it’s the only New England state in the top ten — though with continued activity, neighboring states such as Connecticut, listed by the MPAA as a “state to watch,” may soon make the cut.

According to the Massachusetts Film Office, since Massachusetts passed the tax incentive, $545 million has been spent on film production with a ripple effect of $1.36 billion dollars spent in support industries, such as hospitality and tourism. It follows that new business income brings new jobs.

A July 2009 report released by the Massachusetts Department of Revenue (DOR) stated that, since 2006, direct employment of Massachusetts’s residents in film production increased by 537 percent. This led to the creation of over 3,000 new direct and indirect jobs. However, because of a shortage of local labor, 38 percent of those jobs went to non- residents.

Within these statistics are latent opportunities — both for workers who want to transfer old skills to a new field, and for the organizations or companies equipped to train them. Several efforts to formalize the education of Massachusetts’s workers in all aspects of motion picture production are underway. NewEnglandFilm.com summarized the latest findings. If you know of others, please add a comment at the end of the story or email news@newenglandfilm.com.

The Massachusetts Production Coalition (MPC), a consortium of production professionals that work together to advance industry opportunities in the state, has organized workshops geared toward college students and those breaking into production. They also hold networking events and co-sponsor training and conferences led by its collaborators.

For full-fledged training opportunities, and to gain certification from software manufacturers, the new Kendall Square location (formerly in East Cambridge) of the international organization, Future Media Concepts, specializes in software education in motion graphics and digital film editing. The size of the facility has recently doubled to accommodate student demand and maintain education quality. Founder Jeff Rothburg stated that, “the two biggest areas of continued growth and popularity remain both in Adobe and Apple products, [especially with] with the new releases of Final Cut Studio and Snow Leopard.” Of particular note are their government-funded training programs, which allow unemployed workers to redirect their careers to the digital industry.

Rule Broadcast Systems hosts a Wednesday Learning Lab series that is free to the public. Started in June, it’s dedicated to sharing the latest knowledge on production and post-production products, technologies and techniques. The turnout is strong each week, as reported by Lisa D’Angelo of Rule. “We’ve been surprised to see both customers and non-customers signing up to hear more about the latest technology.” RSVP at their site.

Just over the border in Connecticut, 450 people applied for one of 155 spots in the inaugural five-week Norwalk Community College summer film training program, which has received state funding to provide basic industry skills to residents. Student learning took place in a simulated production environment. All instructors were union-member working professionals with significant industry experience. If you can’t attend that class, consult their resource-rich site. Designed to provide comprehensive services for their own quickly growing film and digital media industry, the site features a job search, a professional directory, internships, and trainee programs with varying levels of qualifications.

Boston Casting and CP Casting offer frequent classes on how to be an extra, how to audition, acting for all ages, and more.

The business of documentary storytelling often requires you to stand apart from the crowd as an astute, somewhat detached observer. Sometimes you need to connect to others for inspiration or plain old camaraderie. Connect the Docs addresses these needs with workshops, screenings, and brainstorming sessions. Attendees to these free and open to all monthly gatherings range from novice filmmakers to names in the Oscar rosters. Meetings will start up from a summer hiatus in September; view their calendar here.

The nonprofit Center for Independent Documentary (CID) collaborates with independent filmmakers by supporting their fiscal, management, creative, and technical needs. There is a free monthly workshop series at the Bernard Toale Gallery in Boston’s South End, and a weeklong summer retreat in Vermont (a collaboration with the Kopkind Institute). Their partnership with the Alliance for Independent Motion Media (AIMM) has jumpstarted a number of programs through its cross-sector network that include funding opportunities and rough cut screenings.

The New England Chapter of the Society of Motion Picture and Television Engineers (SMPTE) is a nonprofit educational and scientific organization for people with a common interest in film/video technology. Membership includes discussion of technology in monthly forums and yearly events.

The Filmmakers Collaborative provides educational programming to filmmakers. Of particular note is their ongoing Film Talks program, in which filmmakers answer questions about their creative process. Filmmakers Collaborative also coordinates an annual conference, Making Media Now. Bonnie Waltch, executive director, noted that, “despite the economy, we made our attendance goals for this year’s conference.” Their next event focuses on how to take advantage of tax incentives.