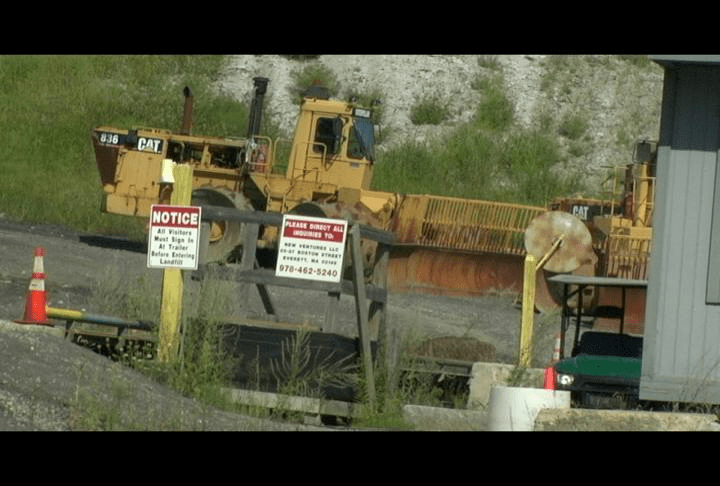 Share
Mary Godfrey discusses her documentary, 'Dumping Billy: The Story of the Crow Land Landfill,' which screens this month at the Newburyport Documentary Film Festival.

“It was a grueling process. I’m tired.” I wasn’t surprised to hear Mary Godfrey say that. Godfrey has recently finished editing a documentary, Dumping Billy: The Story of the Crow Land Landfill. She was also its director, producer, grip, gaffer, sound recordist, and everything else. She’s earned some rest.

Originally from Newburyport, MA, Godfrey was finishing her final year of graduate school at the NYU Arthur L. Carter Journalism Institute. She was studying to get a masters degree in broadcast journalism and her final thesis assignment was to produce a half-hour documentary. The topic could be anything. Godfrey immediately decided to focus on the environment for her project, but she had some trouble finding the right subject for the film. She found herself at home in Newburyport one weekend night venting to a neighbor about the trouble she was having in finding the right subject with the right story for her documentary.

Apparently, a private company had begun to cap the long-dormant Crow Lane Landfill in town and people were getting sick. A noxious odor was pouring from the landfill and residents in the area, which included over 150 homes, were complaining of a variety of symptoms ranging from burning eyes to nausea and more. The problem had been going on for years and the town’s complaints were falling on deaf ears and finding only dead ends. But Godfrey had found her story. It had the two things she was looking for: an environmental theme and a human element, plus it was happening in her hometown, to her own neighbors.

Her first pitch to NYU was rejected. They did not think there was a story there. Godfrey reworked her pitch, pushed the human story forward by explaining how uninvolved the community felt the government has been, and NYU finally saw what Godfrey saw. They approved her project.

“Basically, it was just me.” That was Godfrey’s answer when I asked about her crew. She self-financed the film and was also the crew. (She was able to draft some friends here and there for the more complicated shooting days and another friend, Nate Hendrie, did some after effects work.) Godfrey interviewed as many people as she could. She met with the Health Department, the advisory committee dealing with the community, as well as Newburyport residents new and old. Because the case was, at the time, under litigation, she explained, “I had no luck getting the State or the owner of the landfill to talk to me, but I did get shots of me trying to get them to talk to me.” She took two weeks off from her administrative job with Avid Technology to shoot and then commuted back to Newburyport from New York every weekend thereafter to complete production. Godfrey’s mom would help by e-mailing her newspaper articles and passing along any other news that occurred during the week while Godfrey was in New York.

In documentary filmmaking, where you do not have the luxury of making stuff up, filmmakers are sometimes blessed to find actual characters for our films, you know, real life people who have the charisma and uniqueness that can hold the attention of an audience for the period of the story. Godfrey found her main character in Dave, the part-time health inspector. “He is old-school, old-school, old-school.” Godfrey said. An ex-marine who carries an old leather briefcase, Dave wears a pocket-protector, uses a paper journal instead of a computer, and calls video, “motion pictures.” (As my dear-old-Dad used to say while living out in San Francisco, “Son, you can’t make this stuff up.”)

Godfrey describes Dave as “tall and clumsy, can’t get around himself, charming and full of contradictions, but he gets the job done so well.” I mentioned that the description reminded me of Columbo and Godfrey said, “Exactly.” Also, as a part-timer, Dave had more freedom and availability, allowing a filmmaker to follow him around with a camera.

I asked Godfrey if she had a specific story mapped out as she shot or if she was waiting to find the story in the edit room. “I knew from the beginning the way I wanted the arc to go,” she said, “but I didn’t have a clear ending in mind.” She needn’t have worried. The story-Gods were watching. Not only did Dave become an important character in the film, he provided another gift to the film: the perfect ending. I wouldn’t dream of giving it away here. In fact, I couldn’t even if I did dream such a thing. Godfrey wouldn’t tell me and the film has only screened once thus far. We’ll all have to wait until the Newburyport Film Festival later this month to see how the film ends.

It took Godfrey four months to finish shooting, accumulating over 60 hours of material. It took another three months in the edit room to put together the final show. “The challenge, and the fun part, was to explain the science without losing the human element.” With 60 hours of material and only a half-hour show, the virtual cutting room floor is covered with stuff Godfrey didn’t use, but she feels the people of Newburyport will be appreciative of the film. “I had to keep in mind three questions: What’s the most important thing here? What will keep people interested? And, what will move the story along?” She even did a little math and came up with an equation: for every hour she shot she used one minute. As an editor myself, that sounds about right. It’s always better to have to wade through a mountain of material for a film then to need one specific shot and not have it.

Would she do it again? “Definitely. Newburyport is my hometown. It is rewarding to me to be able to dig into a local issue, meet people in my hometown, and do something for a community I love so much.”

“Dumping Billy: The Story of the Crow Land Landfill” will screen as part of the Newburyport Film Festival September 25-27.

“Dumping Billy: The Story of the Crow Land Landfill” will screen as part of the Newburyport Film Festival September 25-27.