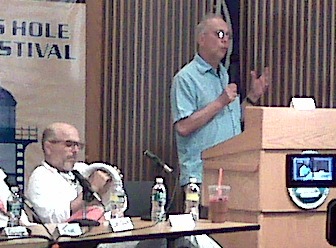 Share
David Pierotti offers his take on Joe Pantoliano’s new documentary, 'No Kidding, Me Too,' which broaches the taboo subject of mental illness.

Ah, Cape Cod. Woods Hole to be precise. It really is a Hollywood-perfect coastal New England town. If the script read ‘EXT – CAPE COD – DAY’ this is where you’d end up. We’ve got the rocky coastline, the ice cream parlors, and plenty of souvenir shops. But I’m not here for fried clams and miniature golf. It’s a beautiful summer day and I’m going inside to watch a movie at the 18th Annual Woods Hole Film Festival.

The festival continues to grow in popularity and prestige and features an annual array of short and feature-length fiction, documentary and animated projects. There’s also a selection of panels featuring experienced film professionals. Perhaps the highlight of this year’s fest, and the reason for my journey, is a very special documentary from Joe Pantoliano, aka Joey Pants, one of every film geek’s favorite character actors. He was also one of three 2009 Filmmakers in Residence at the Woods Hole Film Festival.

No Kidding, Me Too highlights how mental illness, or brain disease, impacts millions of people in various ways, causing tremendous struggles for themselves as well as their friends and families. Pantoliano was provoked to create this documentary when the making of a film called Canvas prompted him to seek treatment for his own form of depression. After learning more about the subject, he felt compelled to use his celebrity and filmmaking skills to provoke more cultural dialog on the subject and lessen the stigma.

At this point I must confess something. Upon reading a description of the film I was expecting an overly-sentimental, maybe even maudlin 90 minutes where tears and cheers would be wrung out of me with schmaltzy music and triumphant tales of the plucky, disadvantaged underdogs who overcome limitations to lead happy productive lives. I was wrong. What Pantoliano has done is craft a three-dimensional portrayal of a small group of individuals, including himself, not unlike anyone else who is struggling to control, and live with, ailments that frequently receive condescension: struggling with the pressures and emotions everyone confronts but because of biochemical reasons have a harder time coping.

Several of the individuals featured were teenagers who have been engaged in various types of self-destructive behavior, including suicide attempts. Their stories were the most powerful testimony to the need to erase the stigma from mental illness. The message here is that if these kids don’t feel as comfortable asking for help as they would for a physical ailment, they may end up like the adults in the film, suffering decades of hardship.

But No Kidding, Me Too was not simply a tale of woe and hope. Pantoliano managed the difficult feat of injecting a lot of humor to lighten what could have been a suffocating tone. Much of this humor was directed at himself as his teenage daughters almost gleefully recounted some of his more erratic behavior. And although he featured himself often, it never came across as self-absorbed or unchecked vanity.

After the screening, Pantoliano participated in a panel discussion. His affable on-screen persona was just as effective off screen as he passionately forwarded his case for a greater acceptance and awareness of mental illness. The panel included two local doctors and one of the film’s teenagers, who incidentally received the loudest ovation of the night.

We often talk about the power of film but it’s rare that one actually does more than titillate and manipulate. Many in the audience came to the screening because the topic was relevant to them; either they or a loved one have a brain disease, and they seemed genuinely gratified by Pantoliano’s efforts. As did the Woods Hole Film Festival, which awarded him the St. Aire Humanitarian Award.

Pantoliano is hoping to raise enough money to air ‘No Kidding, Me Too’ on PBS in January 2010. For more information go to www.NKM2.org.

For highlights from the 2009 Woods Hole Film Festival, and the list of winners, visit www.woodsholefilmfestival.org/2009/.

Related Media: Trailer: No Kidding, Me Too

Pantoliano is hoping to raise enough money to air 'No Kidding, Me Too' on PBS in January 2010. For more information go to www.NKM2.org. For highlights from the 2009 Woods Hole Film Festival, and the list of winners, visit www.woodsholefilmfestival.org/2009/.