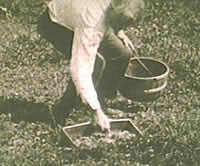 Share
In a two-part article, NewEnglandFilm.com learns more about two film programs that place global ecology under a Maine microscope. Both screen in early October at the Camden International Film Festival.

In its fifth year, the Camden International Film Festival (CIFF), takes place October 1-4, 2009 in Camden, Rockport, and Rockland, Maine. The CIFF is a grass roots community-based festival, which focuses on documentaries. As CIFF founder and program director Ben Fowlie puts it, “Our goal is to take a huge issue and show a small story about it; we humanize it. We bring depth to an issue.”

This year one theme is global ecological sustainability. Two programs firmly plant the issue of sustainability in fertile New England ground — The Fish Belong to the People by Will Hyler and a collection of short films presented by Northeast Historic Film. Both address the importance of a stable food supply in the region and how it relates to changes in New England communities over time. Both also reveal passions that drive New Englanders.

For part I (below), NewEnglandFilm.com spoke with Jessica Hosford, external affairs director, of Northeast Historic Film. Northeast Historic Film is a nonprofit moving image archive dedicated to preserving and providing access to New England’s moving image heritage. The collection’s short film program depicts agrarian life in Maine over time from the 1920s through the ‘80s.

For part II, NewEnglandFilm.com spoke with Will Hyler about his first feature documentary, The Fish Belong to the People and how making it re-ignited passion for his hometown.

Jessica Hosford: A filmmaker on our board worked with Ben [Fowlie]. Since we are a great resource for documentarians and the Camden International Film Festival supports independent documentary films, it’s evolved into a natural fit and great partnership.

MK: Tell me about some of the films in the series this year.

Hosford: A Day in the Life of a Farm was shot in 1930. It’s Elizabeth Woodman Wright’s home movie about her farm in Paris, Maine. She documents her daily life and her family, what a farmer does each day. Part-time Farmer, which was produced by the state of Maine in 1958, was aimed at people moving into the suburbs to encourage them to keep farming in addition to their regular job. It’s a riot actually. There is a film of 4H kids learning about harvesting potatoes by hand.

MK: Was it unusual for families to have film cameras in the 1930s?

Hosford: I wouldn’t say it was unusual. We have many amateur films from that time period and earlier. We have the oldest surviving film shot in Maine — from 1901. It’s a guy pulling a lobster trap.

Hosford: The suburbs were growing in the ‘50s and ‘60s. People were moving into the suburbs from other states and from rural areas in Maine because that’s where the jobs were. Maine is a rural state… the government wanted people farming to maintain Maine’s food production. They wanted people with white collar jobs to also have their own land and continue the rural lifestyle and history.

MK: Tell me about Northeast Historic Film in general. What does it offer filmmakers? Or film lovers?

Hosford: One thing we do is provide raw material that can be used in documentaries. NHF collects and stores old regional film. We have 10 million feet in our collection. We have a study center where researchers and documentary filmmakers can come and search for what they need. For instance, a filmmaker will contact us looking for footage of potato farmers in the 1940s in Maine. Or local news stations or educational media companies will look for something very specific.

People can also pay to store films here. We offer cold storage for finished products and footage that a filmmaker may have used in the film and wants to preserve. And we can transfer old film onto DVD or digital.

We are housed in the Alamo Theatre [in Bucksport, ME], a movie theatre built in 1916, where we show current films. Preceding each new film we sponsor an “archival moment.”