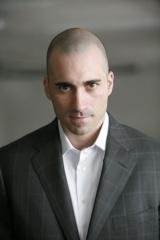 Share
Southie native Jay Giannone breaks out with his first film, the audience award-winning 'Diamond in the Rough.'

Optimistic, oblivious, indomitable, naïve, stubborn, self-deceptive. Actor. Or I should say, struggling actor dodging landlords and meter maids, pleading with agents, selling anyone and everyone on the dream of his talent — that’s the reality depicted in Diamond in the Rough, a short film by Jay Giannone that received the Audience Award at the 2009 Boston Film Night in May. Giannone wrote, directed, produced, and starred in Diamond, which also happened to be his first film.

Born and raised in South Boston, Giannone has brought an earned sense of gritty street life to his roles in Gone Baby Gone, The Departed, and Southie. But now he’s hoping to move on to a new phase in his career, where he calls the shots and is the creative force behind a project. In addition to Diamond in the Rough, Giannone has recently finished production on two other films: Sardines and Scalpers, which was filmed in his old neighborhood of South Boston.

With the help of Matt Muzio, his producing partner, and Abigail Carpenter, his director of photography, Giannone set about bringing aspects of his own life to the screen in Diamond in the Rough. “I wrote this from my heart. It’s based on my real life, the trials of tribulations of Hollywood and how hard it is get a break,” he said.

Although he has had the opportunity to learn acting from some of the best, such as Martin Scorsese, Giannone admits that getting behind the camera was a challenge. “I didn’t go to film school but I was blessed to have a wonderful cast and crew.” He credits Carpenter as helping him with the technical aspects but said it was still quite the juggling act. In every scene he had to “set up a shot, help the other actors and focus on my own lines and performance. It was very rewarding in the end and I’m very proud of it.”

Fittingly, Giannone used to find inspiration by coming to Boston Film Night, but just as a viewer. “I’ve been in the audience about four times now and I used to say I hope I get a film in this festival someday.”

In May, he didn’t just get in; he won. “It was great. It was an opportunity to showcase my work as well as be with my family. For them to see the audience react to my project was very rewarding.”

I asked Giannone what he might tell the next actor/dreamer in the audience who is set on following the same path. He said, “There’s not one way to make it. The only way to make it is your way.”

Giannone plans to premiere Scalpers somewhere in the Boston area in September 2009. For more information check out www.scalpersthemovie.com.

Giannone plans to premiere Scalpers somewhere in the Boston area in September 2009. For more information check out www.scalpersthemovie.com.