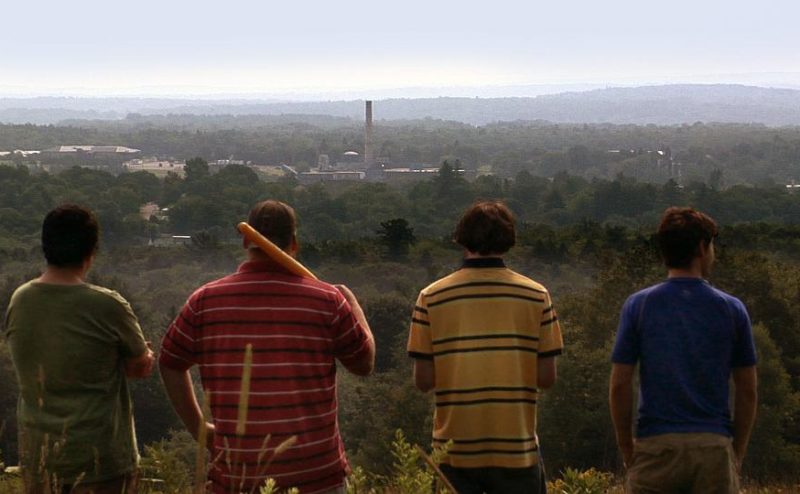 You Can Go Home Again: Alec Helm’s ‘The Kings’

Share
In his feature film debut, Alec Helm spins a local tale of nostalgia and growing up in Waterville, Maine. The Kings premieres this month at the Maine International Film Festival.

It is rare that childhood aspirations become grown-up realities, but Waterville, Maine native Alec Helm has done it for himself. From goofing around with cameras at family get-togethers to freelancing as a cameraman and editor, Helm has been toiling in film since he was in junior high.

Now as a 23-year-old filmmaker with a film degree from Vassar College, Helm is finishing up his first feature-length film, The Kings, which is set to premiere at the Maine International Film Festival (MIFF) this month.

Helm spoke to NewEnglandFilm.com about his experiences as a young filmmaker and what it means for him to be premiering his project at MIFF.

Alexandria Lima: Tell me about how you got started in film.

Alec Helm: I have been making movies for almost my entire life. My dad would rent a camera for birthday parties, Christmas, that sort of thing, and I would always hijack the camera and make my own little videos of the family. When I was 11 years old, my friend introduced me to animation with a computer program that he had, and I started making a lot of cartoons. In junior high, my friend Matt and I started making short films with his digital camera and it got more and more complex. If I ever could, I would do a video instead of a paper or any other kind of presentation. My interest [in animation] really petered out by the end of high school. It was a lot of frame by frame work, which was good for learning patience, diligence and focus, but I didn’t really have the technology to do any good cartoons. At Vassar, I was filmmaking on my own just for fun and made about 15 short films, some for class, some on my own. As a sophomore, I realized that I really wanted to make a feature-length film as soon as I got out of college.

AL: And that’s what prompted your first feature-length film, The Kings?

Helm: This is a movie that tells the story of four best friends from high school that were so unbelievably popular during high school that they never really wanted to leave after they graduated. They didn’t really have to because their popularity stuck with them and they were still big celebrities even three years after graduating. This movie takes place the third year of being out of high school. Four people that [the main characters] knew in high school come back from their first year in college and are sort of the new kids on the block with more fresh stories to tell. They basically usurp the Kings, which is the name the four [protagonists] have chosen for themselves. They are exiled from their hometown and forced to choose between adapting to the real world and being in Waterville to fight to regain their high school glory.

Helm: Of all my ideas for films, I knew this is the one I could probably pull off on a very, very small budget. I based the story around things that I knew I would have easy access to, like locations in my town, a cast that was based a lot on parts that I knew my friends could play well. This is a story I really wanted to tell because I am probably one of the one percent of people who liked high school more than college.

On one of my visits home from college, I was hanging out with my friend, one of the stars, and we pored through our high school yearbook and drove by the high school wishing we were still there. I realized nostalgia was really holding us back and that I should tell this story about how it feels good, but in the end is probably not very good for you. You should move on from the simpler times in your life that you remember so fondly, which is ironic because in order to tell this story I had to completely immerse myself in nostalgia.

AL: So has the project helped you get over your own nostalgia?

Helm: Yeah, I’m definitely over it now. I spent a lot of time shooting at the high school. One of our actors saved us in one scene because we needed to get into a locker and there were no janitors around with keys. He remembered his old high school locker combination and we were able to get into it and make the scene work. We shot this other scene in a classroom with my old math teacher. I think about half of the extras were probably former students of his, which I didn’t let him know before he walked into the room. When he walked in, I saw this look on his face and I think he must have thought he had woken up in teacher’s hell or something. It was a really weird experience. In the scene, his character turns around and tells everyone to be quiet and settle down. When we were rolling on the first take, he yelled, and this weird chill went down my spine. I thought for a quick second, “Oh God, I’m in trouble.”

AL: How long did The Kings take to make?

Helm: I started writing immediately after [college] graduation and really hammered out what sort of universe the story takes place in. What are the rules? How are the Kings so popular? What exactly can they do with all this popularity? I wrote an extremely long script and wasn’t too happy with it, so I started over from scratch. A lot of it was the same, but it helped sift out the bad I couldn’t remember. I moved back home to Maine in February 2008 and started building the equipment. I built my own dolly, a steady cam, the only set that we have (which is an old decrepit tree house), a lighting kit, and I held auditions in Waterville.

AL: How did you finance a feature-length project on your own?

Helm: I knew right away that, as much as I am confident in my own abilities, I can’t justify spending too much money on my first feature-length film. I heard of people who get a dozen credit cards and max them all out and go bankrupt and really kind of screw themselves over. As much as I love this story, I know that it’s not the best that I have in me because I don’t have practice directing a feature film yet. I started saving up my sophomore year of college working in the college library for minimum wage for 10 hours a week. I also saved up when I was freelancing.

AL: Why submit The Kings to MIFF first?

Helm: I grew up going to MIFF. I’ve been there almost every year since it started. I worked at MIFF in 2004 and filmed a lot of the behind-the-scenes stuff at the festival for them, sold tickets. It seemed very appropriate that this be the first place we take the film since it is my hometown. The movie is really a love letter to [Waterville] and to the state of Maine and the environment in which we grew up. You can walk out the door after seeing the movie and be in the location. The movie is going to be screened in a theatre where we actually filmed a scene. It will be like looking into a mirror.

AL: How do you hope audiences will receive The Kings at MIFF?

Helm: I think that it will go over well. They’ll be really excited to see so many Waterville locations made so prominent in this story. With such a large cast, I’m sure there won’t be one cast member who isn’t known by at least 10 people in the audience.

Helm: I’m really not sure at all. There’s a lot of Americana in the film: there’s water tubing, backyard cookouts, wiffle ball, lobstering… I really don’t know how well the film will travel, but I’d be curious to see what another culture’s take on it is because I think it’s very American.

AL: What are your future plans for the film?

Helm: I should have a very, very close to finished version of the movie in about two weeks. I’ll be submitting it to about 10 to 15 more festivals. What I can really accomplish most with this movie is using it as a calling card, a way to raise money. I can show people what I did with such a low budget and raise more money for my next film.