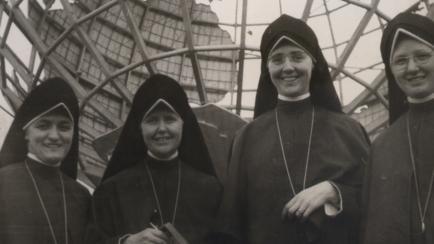 The Inner Lives of Nuns

Share
Filmmaker Rebecca Alvin explores the hidden lives and dreams of today’s nuns in Women of Faith, which screens this month at the MFA, Boston and the Woods Hole Film Festival.

Women of Faith, Cape Cod filmmaker Rebecca Alvin’s documentary about women who have dedicated their lives to the Catholic Church, opens with Sister Mary Francis Hone drawing open a curtain that was once used to separate the nuns from parishioners who came to them seeking spiritual guidance. Following suit, Women of Faith draws open the curtain of mystery that has shrouded the lives of nuns, and provides insight into how these women find the strength and commitment to devote themselves to the Church.

The portrait that emerges is revealing and sensitive. Alvin herself was surprised at what she found. She admits that before making this film, she didn’t think that individualism among nuns existed, and if it did, they would not be open to sharing their true thoughts and opinions. However, “I couldn’t believe how individualistic they are. And they were all very clear with how they felt about things” said Alvin.

Discussions included topics such as contraception, abortion, sexuality, and the ordination of women as priests. Filming began in 2002, during the reign of Pope John Paul II. The papacy of the current pope, Benedict XVI, has steered the Church towards a much stricter course and Alvin isn’t sure if the women would have given quite the same answers if filmed today.

Alvin spoke with nuns from the Poor Clares, a contemplative (formerly cloistered) community. Although a conservative order, Alvin found them to be open and honest. She also interviewed Maryknoll Sisters, an order known for their missionary work in underdeveloped, sometimes war-torn countries. The women describe their commitment to both God and the poor, while sometimes facing horrific violence themselves. They are vocal in their dissent with the hierarchy of the Church, especially with issues that many consider “women’s issues,” such as contraception.

One former nun, Donna Heitzman, spoke openly about sexuality. She described her own conflicts, and also how she dealt with the realization that she was homosexual. Heitzman left the convent with the goal of returning in two years, after taking a journey of self-discovery. She never returned.

The documentary also focuses on the issue of allowing the ordination of women priests. “I didn’t realize it was such a divisive issue,” said Alvin. She interviews a womanpriest (one word), Reverend Marie David. According to Alvin, David was ordained in international waters (therefore no diocese was necessary) by bishops who were ordained by other bishops in good standing. Although the Church proper would say that this is not a recognized ordination, others would disagree. Reverend David performs mass and delivers sacraments. Most of the nuns interviewed for the film were strong in their opinion that women should be allowed to become priests.

Raised by a Catholic mother and a Jewish father, Alvin says that she grew up with no religion. She did have a great aunt who had been a nun but had left the convent. Alvin never did learn the reason why her aunt left, but recalls that “she wasn’t the stereotypical nun. She smoked and played poker.”

So what inspired her to make this film? “I’m drawn to people who do extreme things because I’m not someone who does anything too extreme. It’s the classic documentary filmmaker.”

Reaction to the film has been positive, by both Catholics and non-Catholics, with screenings this month at the Museum of Fine Arts, Boston and at the Woods Hole Film Festival. Interest for the documentary is spreading beyond the New England region, with plans for screenings in Virginia in August and Milwaukee in November.

At one point in the film, more of the curtain is drawn back, as old movies of nuns skating, sledding, having snowball fights, and playing with a dog, appear on the screen. There is loud rock music playing in the background as the women enjoy life. If not for the black habits they are wearing, these could be anyone’s home movies.

For more information on Women of Faith or filmmaker Rebecca Alvin, click here.

Women of Faith screens at the Museum of Fine Arts, Boston from July 2-10. There will be director Q and A after the July 5th showing at 12:10 pm. For additional times, please visit www.mfa.org/film

For more information on Women of Faith or filmmaker Rebecca Alvin, click here. Women of Faith screens at the Museum of Fine Arts, Boston from July 2-10. There will be director Q and A after the July 5th showing at 12:10 pm. For additional times, please visit www.mfa.org/film Find more info about the 2009 Woods Hole Film Festival here.