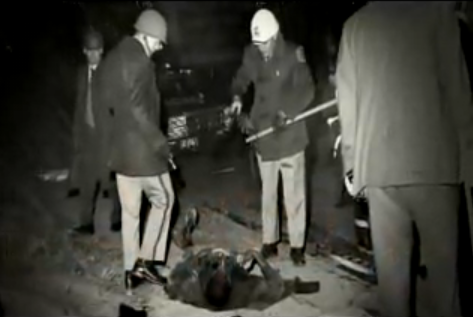 Share
In Scarred Justice, documentarians Judy Richardson and Bestor Cram expose and examine the 1968 Orangeburg massacre, one of the overlooked corners of the Civil Rights Movement.

Our lives begin to end the day we become silent about things that matter.
-Martin Luther King, Jr.

The Orangeburg Massacre, what journalist Tom Brokaw calls one of the most shameful events in the history of the American civil rights movement, took place at South Carolina State College, an all black school in Orangeburg, South Carolina. It was 1968, two years before the highly publicized killings of four white students at Kent State College in Ohio created a national uproar. The killings at Orangeburg were kept so quiet that even local people did not know of their occurrence.

On the night of February 8, 1968, students from South Carolina State and nearby Claflin University converged to protest the whites-only policy of Harry Floyd’s Bowling Alley. Three days after the initial demonstration, while students protested at a campus bonfire, state and local police officers fired on the protestors. Three young men were dead and at least 28 were wounded.

More than 40 years have passed and no one has ever been held accountable for the casualties. How could the state of South Carolina escape with such negligence?

Twelve years ago, filmmaker Bestor Cram, founder and head of Boston-based Northern Light Productions(NLP), decided to document the untold facts of this underreported moment in American history. When Judy Richardson was hired as a senior producer at NLP, he asked her to partner with him in this effort.

NewEnglandFilm.com had the opportunity to interview co-director/producer Judy Richardson. Bestor Cram was out of the country screening his film, Johnny Cash at Folsom Prison.

Hermine Muskat: Your film not only records history but constructs it by telling a story that many never knew.

Judy Richardson: In order to understand the history of the civil rights movement, we must understand Orangeburg, not only the events that led up to it but why so few people, even people who live there, know so little about it. When I teach students about this period in our history, when they see the film, we discuss the prevailing attitudes of those years and it’s not such a mystery that this could have happened, given the attitudes, North and South, at this time. Many feel that true reconciliation demands a full investigation of the massacre but all previous attempts to mount one have failed. But it’s a film that continues to evolve and each time I see it, I see something new, something to re-engage me. It never feels stale. I loved making it and love how it speaks to today’s struggles.

One of the things that Bestor and I are really happy about is that the film brings to the fore a story that has been hidden, not only from the white community but from the African American community as well. Incredibly, many people born and raised in Orangeburg never knew about the massacre, so it provides a way for people to know and begin to talk to one another about it. Because the FBI investigation and report on the incident was never made public, people accept the construct that the students were responsible for what occurred. This is not what we found as we scrupulously researched the incident through Freedom of Information Act documents from the FBI investigation and from our work with Jack Nelson and Jack Bass, the authors of the seminal book on the incident, The Orangeburg Massacre. Most important, we were intent on representing everyone’s point of view so that viewers could come to their own conclusions. But yes, the film corrects certain assumptions and misperceptions and therefore does change how this incident may be understood both locally and outside the Orangeburg community.

HM: You’ve talked a lot about the strength of your collaboration with Bestor your editor, Chuck Scott, and your writer, John DeLancey.

Richardson: For me, documentary filmmaking is like the civil rights movement. You have all of this input and the assumption that the team will come together and produce something that’s better than anyone of us could have done by ourselves.

HM: Your film has been screened many times. Did test screenings have any affect on how it was crafted and completed?

Richardson: I did an early screening at a professional development workshop for teachers and it was clear that we had not adequately drawn the role [Police] Chief [Peter]Strom played , so we added an interview bite of him that we’d found Other things were discussed and refined but nothing major really changed.

I’ve shown the film to major historical organizations. I sit through each screening and I love to see their reactions. Our premiere at the 41st anniversary of the massacre, held at S.C. State University, was very emotional, with 700 in attendance. The audience got every intended nuance. And when then-Governor [Robert] McNair says, “we have to understand that police officers feel badly about it, too,” the audience let out a major groan. This was not heard as much with other audiences. At teacher training workshops in Vermont and in Springfield, Massachusetts, teachers were amazed that they knew nothing about the massacre.

When you do a Q & A, you realize that people get something from a film that you’d never anticipated because it relates to their own personal experience. A younger white woman at Brown University felt that any blame ought to be shouldered by the larger society and an environment that condoned racism. At a teacher workshop one older white man, who I assumed had been in the military, became angry and felt the massacre was the responsibility of the person in charge, since no rules of engagement had been given to the officers on the scene. So, the film evokes very individual responses depending on a person’s context and understanding. At a screening at Newton South High School, some students wanted to know why the officers got off since there was no evidence that the students were armed and the FBI found that no shots had been fired from the S.C. State campus. However, some of the [Metropolitan Council for Educational Opportunity] students at Newton who are from Boston seemed to understand only too well. It’s important to understand that this is not a Southern story. It’s a national story.

HM: What do you hope audiences will take away from the film?

Richardson: An understanding of the long range effects of an uninvestigated abuse of power and what happens when folks decide someone is not like them, that they are the “Other.” We have Governor McNair, considered to be moderate. He had negotiated with these same students one year before. Yet, the very next year, they are seen as the unknown other… and different. So yes, we can shoot them.

HM: Do you find that there’s a tendency to say “Oh, this is history. This is not pertinent now?”

Richardson: Yes, I do. One student at Brown asked me what I was thinking about when I watched the film. I said, “Truthfully, I was thinking about Guantanamo,” and we discussed the concept of the “Other,” and what happens when someone is not like you — it brings to mind many modern day parallels.

HM: As a civil rights activist, how do you respond to those who say that the election of Barack Obama indicates that race is no longer an issue in this country?

Richardson: Oh, I love that! That now we’re post racial. It’s difficult to say that to any black man walking through most neighborhoods or driving down 95. Certainly, we no longer have to carry a little blue book telling us where we can go to the bathroom in the South, but there are still glaring inequities. Look at subprime mortgages that were given to an overwhelming number of African Americans and Latinos who were qualified for traditional mortgages; look at the firings at General Motors. But, then a lot has changed: that Obama could give such a beautifully nuanced speech in Philadelphia, that so many white people could actually vote for an African American president, that we are seeing and acknowledging so many brilliant black people, that more white Americans are now seeing what African Americans already knew — that there are actually loving black families… It really is a sea of change… in some respects, at least. And, Michelle: when she refers to the White House as, “the people’s house,” she is making it that… it leaps over the whole racial divide.

Scarred Justice will be shown at the 100th Anniversary of the National Association for the Advancement of Colored Persons (NAACP) in New York City, July 15th at the New York Hilton.

This month, Cram presents Johnny Cash at Folsom Prison at the Woods Hole Film Festival where he will also participate on a panel. For a complete schedule, click here.

Scarred Justice will be shown at the 100th Anniversary of the National Association for the Advancement of Colored Persons (NAACP) in New York City, July 15th at the New York Hilton. This month, Cram presents Johnny Cash at Folsom Prison at the Woods Hole Film Festival where he will also participate on a panel. For a complete schedule, click here.