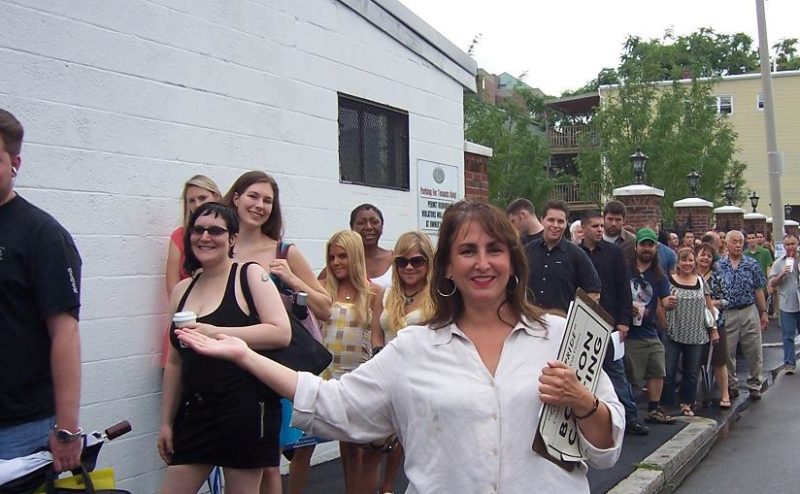 How to Nail an Audition

Share
Boston Casting’s Julie Arvedon offers insight on how to audition, when to give up, and the best way to become a reality TV star.

Going to a casting session is tough. As a finalist for Boston’s casting call for America’s Next Top Model, I know how scary it can be. You have to psych yourself up for what amounts to a 30-second encounter with a casting director. You have to be poised, charming, and magnetic while suppressing the gnawing wonder: What are they thinking?

For those new to the casting process, the first hurdle is landing an audition. Newcomers can look for open casting calls, which may require a lot of waiting around but can be the best way to get on the set of a major film production. A more effective and strategic route, according to Julie Arvedon, casting director and director of marketing at Boston Casting, is to get a headshot and resume into a casting agency’s database.

Boston Casting accepts applications online and Arvedon suggests that even if you don’t have a long resume, list your special skills, such as nursing or rowing crew. Sometimes a director wants someone who really has experience working in hospital or sculling, she explained.

In my experience, during a typical casting session, you’ll slate your name, whether or not you have a union affiliation, and then the casting director or director will tell you what to do next. You may read from a script you were given in advance or asked to improvise. “Every audition is different. Be prepared to roll with the punches,” said Arvedon.

But no matter how much experience you have, it can’t hurt to get more tips on how to stand out and what to avoid. Is there a positive way to digest rejection, and is there a time to give up? Arvedon recently shared her behind-the-scenes audition advice to NewEnglandFilm.com.

Ariella Gogol: What’s your biggest tip for landing an audition?

Julie Arvedon: Be persistent, but most of all, have yourself listed with Boston Casting (as well as all of the other casting companies). Get yourself out there, and keep auditioning. Every audition is a learning experience, and that will lead to your next audition

AG: What is the first thing you look for when casting a role?

Arvedon: Well, we always look at the script, to see what the characters are all about. We think about the kinds of people who could act like these roles. The tricky part is the tremendous range: sometimes people who you might not initially think are right for the role will land the part.

AG: Boston Casting specializes in films, commercials, and reality TV. What’s easiest to cast for? What’s the most fun to cast for?

Arvedon: They’re all fun, I must say. I can’t say that anything is easier than anything else — each project is so different, and you treat each project accordingly. There are terrific aspects to all of those types of castings, and you meet such a diverse array of people; every day is an adventure.

AG: Are there differences in the types of people who audition for films versus commercials or reality TV?

Arvedon: There’s definitely more of a difference between the film/commercial side versus reality TV — a lot of reality TV people are not actors. They either have a specialty, or they have something interesting in their lives, but they’re not necessarily an actor. But some actors do audition for reality TV — it just depends on the topic for the show. We recently did something for the Food Network where we needed chefs and people who work in restaurants. We also cast reality TV shows that focus on families, and we’ll have some actors who come in with their families — not as an actor, but as a member of their family.

AG: How did you get into casting?

Arvedon: I was a video producer when I got out of school, and was working in corporate for a while. I started casting my own projects, and found that I really enjoyed it. I worked for friends in other production companies, and started to build a business. I’ve been involved with the Boston Theater community for longer than I can even say — and worked with various other theater companies — so I felt pretty connected to the acting community.

AG: Did you ever want to become an actress?

Arvedon: Not really, not at a professional level. I had a lot of fun doing school projects, plays, and community theatre, but knew that my talents lay behind the camera.

AG: How does one prepare for a reality TV audition? Are there ways to ‘be yourself’ better?

AG: Do you think it’s essential to have an agent?

Arvedon: In Boston, we don’t really work with an agent system, per se. The modeling world does much more so.

AG: Ever thought about doing model casting? Do you think it would be easier?

Arvedon: We do print work here as well, so we have models in our database but they are primarily models who can act. I actually think [print work] is really difficult because actors need to use one look to convey a feeling.

AG: What’s the biggest mistake you’ve seen someone make in an audition?

Arvedon: I think anyone who walks into an audition in a bad mood is making a huge mistake. You want to come in feeling confident, feeling good about yourself — to be able to open up, take direction. Put everything else behind you when you walk in that door.

AG: Any tips for how to not get discouraged after constant rejection?

AG: Is it possible to go to too many auditions?

Arvedon: No, absolutely not! Go to as many auditions as you possibly can.