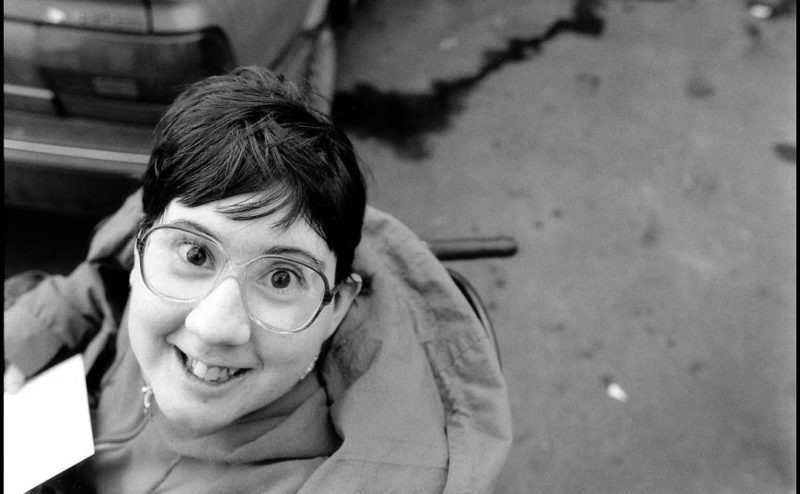 Shooting for the Stars

Share
After more than a decade in production, spousal duo Courtney Bent and George Kachadorian redefine beauty with their new documentary, which screens this month at the IFF Boston.

While a picture is worth a thousand words, the film Shooting Beauty — the tale of photographer Courtney Bent, who gave cameras to disabled adults in hopes of giving them a voice — will leave you speechless. It is more than a film; it is an emotional transformation, and one not to be missed when it is showcased at the Independent Film Festival Boston on Sunday, April 26th.

Raised by a fashion editor and retail buyer, Bent felt the natural inclination toward fashion photography. While it was a fun scene, she admits she felt like an outsider. Her desire to do portraits led her to photograph a dance-a-thon in the mid-’90s. Upon meeting the United Cerebral Palsy group during the portraits session she began to see what she was missing. “I just loved putting myself in these worlds so different from the one that I grew up in. It was exhilarating, exciting — and eye opening — for me.”

Bent credits her husband, filmmaker George Kachadorian, with putting her experiences with the disabled community on film. And the pair has been toiling at the project from their Durham, NH home ever since. Bent recalls sensing that her subjects appeared trapped inside their bodies, trying to get out. “I was telling George, ‘These people are so interesting and fun and unique, and I am not getting this with my pictures. It’s not enough.’ I thought it would be great to give them the cameras to see how they see the world, but I was still frustrated by the fact that I was not capturing them the right way. So George suggested bringing a video camera. “Only then was I starting to capture who they really were.”

Like Bent, Kachadorian was not sure what would be uncovered on film, but was very intrigued. “I remember it was $600 for the first camera. It was a huge financial commitment, but we knew we had to do it. We weren’t sure where this was going, but we knew once we started we couldn’t stop. Not only that, these people had become our friends. It was more than a business venture in any sense,” he recalls.

Kachadorian, however, needed more than great footage to make the film a reality. “My first job editing was in 1998, around the time I started this project,” he admits. “I had good instincts and was a hard worker, but I would continually try to edit it [only to] realize we didn’t have enough footage or we would not have enough vision. We would end up with 15 [seconds] of something so we would figure out ways to work harder on it; so we went off to interview experts.” Almost 10 years later, Kachadorian says he had finally reached a point in his editing and producing where he could see a story, and admits, “The story I was seeing had nothing to do with media and experts, but was a personal story about Courtney and her friends. We decided that no one would talk about them, they will talk about themselves.”

While Kachadorian and Bent boast about the many wonderful characters introduced throughout Shooting Beauty, they recognize the obstacles of presenting a film about the disabled to the general population — a lesson reinforced during test screenings. In an effort to ease viewers in, the film opens with Bent sharing her photography background and detailing how she came to know this special group. Bent notes that by introducing herself first and being the viewers’ guide, the film mimics what she experienced during her years of befriending persons with disabilities. “I am helping other people go through the same mental cycle of first feeling sorry for them, then realizing [my friends] are vibrant, interesting people. Their disability comes second to that, whereas when you first meet them their disability is the first thing you see. Once you get to know them, the disability is almost not there anymore.”

Kachadorian says that Bent’s interview at the start of the film and subsequent narration is “the glue to tie everything together.” With the help of Courtney’s guidance, we delve into the day-to-day lives of 27 disabled men and women who learn how to express themselves through photography. Cameras are uniquely operated by tongues, chins, or hands once chairs have been significantly rigged, but each individual masters the ability to showcase their world. And with that, their dreams.

The path to becoming filmmakers has been as transformative as the content itself, it seems. “For my own personal journey, the concept was crashing down the notion of what we see as beautiful,” Bent reveals. “You can hold it up and see inside what is beautiful. You have the characters and the life of these individuals — that is what beauty was to me. Some people say, ‘What a nice thing you did for them,’ but what an incredible thing for me to experience. When are that many people excited to see you? And I made a lot of friends. It was a win-win situation for everyone.”

As a viewer going beyond the camera to unknown territory — into the lives, into the hearts of the disabled — we ultimately relate to Bent’s friends’ love and loss, obstacles and victories.

Given the more than 10 years in the making, the filmmakers faced significant technology evolution throughout production. Kachadorian, ever the resourceful optimist, worked them to his advantage. “As soon as new technology came to the desktop, we would immediately absorb it and leverage it to make the project better.” He confesses that technology also made the film possible. Without being able to digitize on the desktop, or if he had had to utilize an editing suite, the film cost “would have been millions of dollars.”

Cost-consciousness did not keep Kachadorian from securing extraordinarily talented musicians. Kachadorian sought the help of two of Boston’s most accomplished — Faith Soloway, a folk-rock musician, comedic performer, and creator of several folk-rock musicals who spent three years as Second City music director, and Eric Schmider, with whom Soloway frequently collaborates on rock musicals. Kachadorian notes that Soloway immediately understood the musical needs, and “presented us with an entire soundtrack which she conceived in her head.” The result is music that feels intimately threaded throughout the film with upbeat energy during the positive moments, poignant notes to punctuate the sadness.

Kachadorian is shy to admit that alongside Soloway’s driving force on keyboard and guitar, and Schmider’s guitar, was a third musician, A.C. McWipey, on harmonica and keyboard, and that he, Kachadorian, is none other than McWipey. The three spent a weekend in the Kachadorian/Bent home with a minidisc recorder developing the soundtrack.

With over 250 hours or footage amassed, hundreds of pages of transcripts, and more than a decade of personal and professional sacrifice, Bent and Kachadorian are ready to launch their joint masterpiece. Kachadorian, an animated storyteller, and Bent, a calm, thoughtful speaker, agreed working together with such intensity poses challenges. But, they concur there is no one with whom they would rather work. Bent notes there is a level of trust she wouldn’t have had otherwise.

Kachadorian and Bent’s tireless dedication to Shooting Beauty is more than a labor of love — it is a grassroots effort to change the way we look at people with disabilities. To ensure the message does not end with the film’s credits, they are working to get the film into the educational system. In addition to participating in the Full Frame Documentary Film Festival on April 2nd, Bent is writing curriculum with Sara Lasser, associate director of education at the American Folk Art Museum in NYC, among other educational organizations, to orchestrate the sharing of this message.

There has also been interest from local businesses for corporate workshops. “I love that it can be broader, about general diversity instead of just disability,” exclaims Bent.

Kachadorian agrees wholeheartedly. “It’s not just good for people with disabilities, it’s the opportunity to discover something about ourselves.”