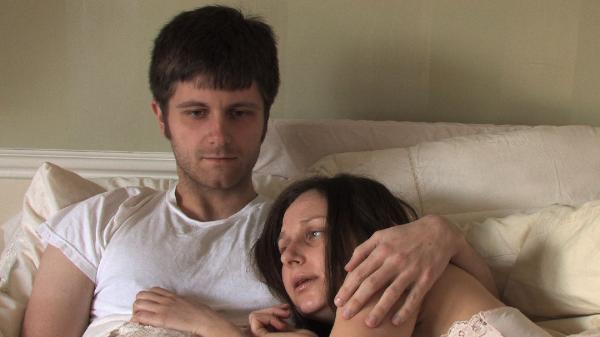 I submitted my short feature, November 31st, to several local festivals and to the Bare Bones Festival in Oklahoma. Why Oklahoma, you ask? “That’s not quite Hollywood,” you say? Exactly. Why else would it be nicknamed, “the world’s friendliest film festival”?

November 31st is the story of Scott, a taciturn young man who encounters Kathy, a squatter living in an abandoned house. He learns her life philosophy and sinister secret, and his involvement with her has immediate and lasting consequences on himself, his needy girlfriend Josie, and everything around him. The film was meant to be a 20-minute short, but pesky considerations like character development and conflict necessitated a length of twice that. I’ve written and directed four features since 2003, but I wanted to challenge myself with a shorter piece.

Keeping in mind that films of such length are difficult to market to a film festival programmer looking only for features or true shorts, I targeted my submissions to those festivals that had ‘short feature,’ or ‘featurette’ categories, such as Bare Bones.

In its 10th year, the one-week festival is organized by husband and wife team Oscar and ShIronbutterfly Ray. Set in scenic Muskogee, home of John T. Hammons, the youngest mayor in America, the festival draws filmmakers, producers, and actors from across the world. With multiple venues and a program of over 170 short and feature films, the festival becomes a major Midwest cultural event, attracting big crowds and media professionals.

My journey to Bare Bones began with my official selection, followed by the notice that I was nominated for Best Mini-Feature. While a trip to Oklahoma was not in my initial plans for the year, this was worth it.

Two planes later, I arrived on Friday evening, the 24th. The next morning, I visited the Muskogee Civic Center, picked up my festival badge, and sat in on an indie actors’ panel as well as script readings, in which aspiring local talent read the screenplays of aspiring writers.

The number of local actors in attendance particularly struck me. In fact, there were even local talent agents (who were actors themselves) popping in to various readings and screenings. I would not have thought Oklahoma to be such a hotbed for actors, but it looks like I (and you, most likely) thought wrong.

I introduced myself to everyone I could; the typical questions back were: “Where are you from?” “Which film is yours?” “When is it screening?” “What’s your next project?” There were so many filmmakers from so many places (Wisconsin, Michigan, Texas, etc.) that it certainly gave the impression of a national film community.

After promising almost a dozen fellow filmmakers to attend their screenings (and vociferously promoting my own 6 pm Saturday slot), I was off to the movies.

This year’s festival attracted special guests such as MTV film star Randal Malone and The Wizard of Oz “munchkin” Jerry Maren, one of eight surviving cast members of the 1939 classic. They were both honored and presented with keys to the city of Muskogee by Mayor John Hammons, who brought levity and an obvious interest in the arts to the event.

Films of particular interest were Frayed, a short narrative about child abuse and escape, The High Tower, a short detailing self-doubt and redemption in a Chinese gang, and Libby Girl, a comedic short about a dog’s theft of a car. Other films of note included the features Willa Mae Church Lady: Vampire Slayer and romantic comedy Soulmate (dot) Wed. I wish I could have arrived at the festival sooner so that I could have spent the entire week watching so many entertaining and thought-provoking films.

One clever team, to promote their comedy feature, The Stevie Wondershow, printed out hundreds of masks of their main character for festival-goers to wear.

After November 31st screened, I fielded questions and thanked the audience for attending. Not unnoticed were the fellow filmmakers who had promised to be present at my film.

On Sunday morning, I sat on an indie producers’ panel during which we discussed marketing, distribution, and the challenges inherent in bringing a film to screen from script.

After additional screenings came the awards ceremony. There were 40 categories for awards, and the festival organizers rolled out the red carpet in front of the Roxy. Many in attendance wore formal wear in the 80-degree heat.

The ceremony, like a Midwestern academy awards, was bracketed throughout by musical performances (local dancers, singers, and musicians) and tributes to festival special guests.

One filmmaker, upon receiving an award, said in his acceptance speech, “It’s great that there’s a place like this, a place that truly recognizes what an independent film festival should be, a film that doesn’t have to have a $5 million budget or cast Tom Cruise to be considered for inclusion.”

When the winner for Best Mini-Feature was announced, being an optimistic realist, I was not disappointed when Ford Austin’s Grappling with Your Demons clinched the award. I was pleased that on my first inclusion into the festival, I was even nominated in the first place.

However, one thing to learn about Bare Bones is that it is indeed full of surprises, each of which is rather pleasant.

Oscar and ShIronbutterfly announced an unexpected award. “We can expect a lot out of this filmmaker, who sat on our producers’ panel earlier today. The award for best producer goes to Jared Gordon.”

I am proud to have exhibited in the Bare Bones Film Festival, proud to have been made an honorary “Okie from Muskogee” by Mayor Hammons, but most of all, I am proud of my fellow artists who brought their work to Oklahoma, rallying themselves into telling stories (as the festival’s motto goes) “by any means necessary; no frills, no waste.”