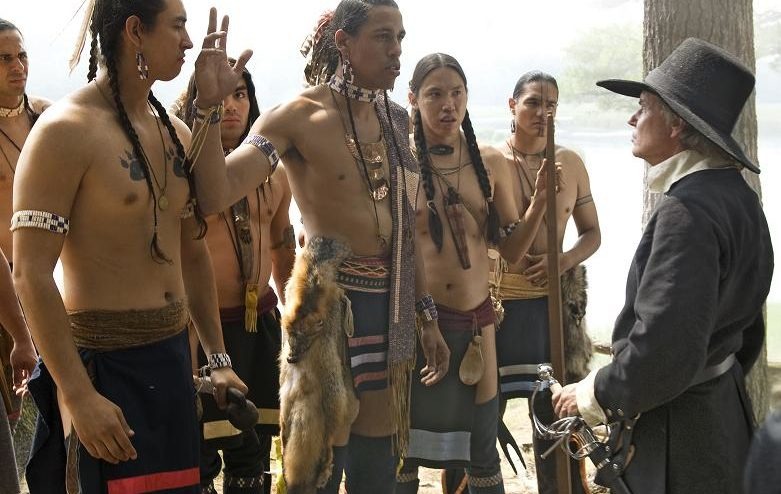 Share
This month PBS launches an unprecedented multi-media event with We Shall Remain, a five-part series spearheaded by local producers and bolstered by New England talent and locations.

Documentaries are no longer the boring, academic films you remember from junior high school, the yellow chalk-dust wafting in the white projector beam. Documentaries have entered the mainstream world of modern filmmaking, complete with streaming video websites, director commentary, and multimedia campaigns. One of the largest contributions to this change is the use of highly produced dramatic components inside the documentary form. At one time dramatizations may have seemed at odds with the documentary, designed to present “facts.” But like pineapple and pizza, the two go together surprisingly well. The new multi-part series from PBS We Shall Remain is a prime example of the evolving use of the documentary story-telling device.

We Shall Remain is the latest project from the award-winning PBS series American Experience. This five-part series details the history and lives of the Native American People. The show is broken up into five episodes — each one focusing on a different part of Native American history and told from the Native American perspective. Episode one begins after the arrival of the Mayflower to Massachusetts’s shores in 1621 and episode five ends with the tale of the siege of Wounded Knee in 1973. We Shall Remain premieres on WGBH Monday, April 13th. The project is much more than a television event, however; it includes an in-depth website with additional web-only videos and behind-the-scenes stories, community outreach programs, a teacher’s guide for social studies programs, a library event kit and more. Episode five was shown at this year’s Sundance Film Festival. NewEnglandFilm.com recently had the honor of speaking with the executive producer/co-writer of the series, Sharon Grimberg, and coordinating producer/recreations producer Cathleen O’Connell.

The project was the brainchild of Grimberg, originally from London but currently based at WGBH and a producer for American Experience since 2000. “We wanted to present Native Americans as real people, not stereotypes, not savage warriors or hapless victims, but as three-dimensional human beings.” Because the goal was not only to educate the audience, but also to involve them emotionally, the decision was made to use dramatizations during certain episodes of the series. Of course, there was also a practical reason behind that decision as well — there is no visual record of many of the events that occur during the first two episodes.

The first episode is about the Wampanoag and their relationship with the Pilgrims, the first Thanksgiving and what came after. There is no visual record of these events, no imagery of the central character — Massasoit, leading sachem of the Wampanoag. Very few facts are known about the first Thanksgiving, except these: about 90 Native people showed up with five deer, the Pilgrims shot some kind of fowl (the kind of bird is unknown), rifles were fired in celebration, and the event lasted about three days. That’s it. (Oh, and it happened in late summer not the fourth Thursday of November.) We Shall Remain Episode One: After The Mayflower creates a seven-minute dramatic sequence from these simple, basic facts.

Once they started down this path, Grimberg, her writers, and filmmakers had to be sure their scripts were as historically accurate as possible. “There was a certain amount of invention,” she said, “since no [participants] wrote anything down. [But] we didn’t invent any characters or love interests.” The producers worked very closely with scholars and advisors to make sure the scripts were “culturally specific and accurate.” The job of actually gathering together all the assets to create the shows fell to Cathleen O’Connell.

A Boston-based freelance producer who has done many projects for American Experience, O’Connell was the re-creation producer for the first episode of We Shall Remain as well as the coordinating producer for the entire series. O’Connell has worked on many documentaries with dramatic components. She said, “I have found an odd niche translating between documentary and dramas.”

A long list of unique challenges faced O’Connell during the pre-production of We Shall Remain. The series has both a long span of time (1621-1973) in addition to a large geographical span (East Coast to West). Verisimilitude dictated shooting in as many of the actual places that were witness to the original events. For episode one that meant shooting all over New England.

I asked O’Connell if setting up a dramatic shoot was different than setting up a documentary shoot. “It’s all in the prep,” she said. “Prep time is dramatically increased. A documentary is documenting something that already exists. A period piece has to have everything created.” Casting, costumes, props, make-up, locations — all must be found or made, and all must be accurate. The actors playing the Pilgrims had to have nasty Pilgrim teeth and the Native American face painting and markings had to be exactly correct. O’Connell prefers to begin prepping a period shoot at least six to ten weeks ahead of the first day of shooting. Experience has taught her that “very little is easy to find.”

Production on episode one began in March 2008. All the dramatic parts of the series were shot on 16mm. Shooting all the winter-related material lasted for almost two weeks. A second chunk of filming occurred in July, including the recreation of the first Thanksgiving. Plimouth Plantation could not be used as a location due to its seven-day-a-week operation as a museum, so Salem Pioneer Village on the North Shore stood in for 1600s Plymouth, MA. Other local locations included Sturbridge, Plum Island, Blueberry Beach in Marshfield, Brook Farm in West Roxbury and, for episode five, the infamous Trail of Tears was recreated in Jaffrey, NH.

All in all the show was an enormous undertaking, much larger than which both O’Connell and American Experience were accustomed. Yet, “It was incredibly rewarding, for everybody,” she said. Continuing, “Crews in Boston are so used to doing anything, [but] when the project is something more stimulating and interesting…they welcome the challenge.” It was understood by everyone involved that they were working on something more important than a mayonnaise commercial and that brought out the best in each person on the project. Plus, there was a new and unusual challenge for O’Connell herself — competing for crew with Martin Scorsese and scheduling her shoots in between all the feature work that has been coming to town. On the plus side of that challenge, crewmembers were honing their craft and gaining feature film experience that they could then bring to the We Shall Remain project.

That same sense of doing something that mattered attracted some of the best local artists and craftspeople to the show. DP Stephen McCarthy shot all the interviews on high-def and Allen Moore did additional photography. Joe Rossi did the make-up, Virginia Johnson was the costume designer, John Kusiak composed the score for all five episodes, extras and supporting roles were locally cast by Boston Casting, editing and post was done in house at WGBH for episodes one and four, the list goes on and on.

The goal of We Shall Remain from the beginning was to make a series of films that would give audiences a new perspective of the lives of the only people native to this land. By using the documentary form in conjunction with dramatizations of historical events a modern audience can get emotionally involved with the Native Americans as people as well as learn about Native Americans as a people.