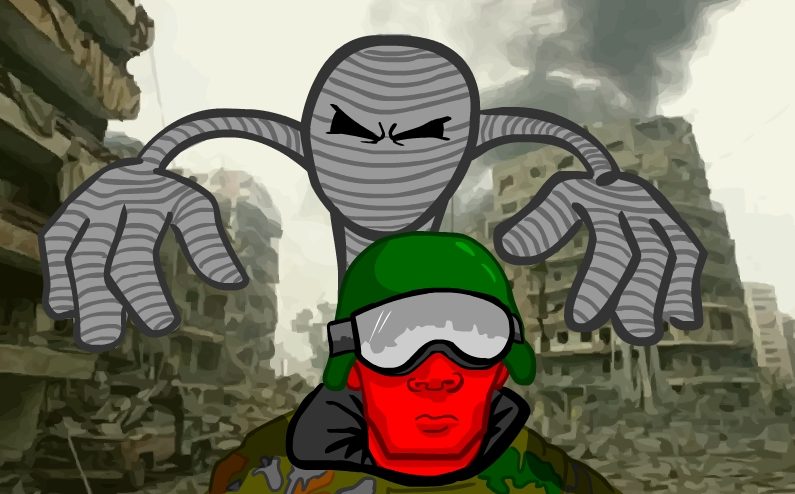 Share
Animation students at MassArt focus on imagination and basic design skills rather than technology to create films for the annual Squealing Pegs show on May 8th.

Animation students and professors alike at Massachusetts College of Art and Design (MassArt) embrace clever creativity and this month’s annual Squealing Pegs show offers a screening of their most witty projects.

The show, whose name draws from a Mission Hill neighborhood bar (The Squealing Pig) and a device used in animation studios (a peg), culminates a year’s worth of work by animation students.

Steve Madden, a MassArt senior and veteran of the Squealing Pegs show, has been working on his degree project since the fall semester. This year, his film involves improv conversation and mixed media illustrated by sequences of paintings.

A principle of the animation program is that all students create every part of their film, from idea and storyboard to the soundtrack and editing. So like all students, Madden illustrated, animated, and created a soundtrack from scratch for his degree project.

“You are responsible for everything your project entails,” says Madden. “Flip’s classes are pointed at being a one-man band.”

Madden is referring to associate professor Flip Johnson, who approaches all of his classes with what Johnson calls “lowered stakes teaching.”

“Rather than confront them with ‘make a film,’ we say ‘appropriate a soundtrack and focus on how you find metaphors to match,’” Johnson says. (MassArt has a partnership with Berklee College of Music, so that music students can score films by animation students.)

One of Madden’s films from the previous year, An Interview with Bob Cobbing made it onto the Squealing Pegs reel in 2008 and into the Museum of Fine Arts, Boston showing this past February. Madden stumbled across sound clips of interviews with an eccentric British poet, Bob Cobbing, online and then dedicated his film to representing those interviews via strata-cut animation. For Madden that involved slicing the end off a block of clay and shooting its internal images frame by frame until the shot was complete.

The film reached an international audience when MassArt submitted it with a number of other student films to the Ottawa International Animation Festival in the fall of 2008.

“It’s a really cool thing to put on your résumé,” Madden says.

Strata-cut animation is among the many styles students learn throughout their three years earning a Bachelor of Fine Arts degree in animation at MassArt. Most students begin their degree program sophomore year, after spending freshman year in core classes and choosing one of the 21 programs offered at the school.

In general, animation students come to MassArt with little or no experience. “We prefer they have no background. You don’t work on The Simpsons by drawing Homer Simpson. You work on it by drawing the human figure,” Johnson says.

When students start in the animation program, they meet the “three peas in a pod” — professors Johnson, Leland Burke, and Steve Gentile — who stand as a united team, dedicated to teaching students the basics of creating strong films. Though, each of the professors operates with a unique approach.

Johnson focuses on the artistry of animation and critical nature of producing a thoughtful film. If students make a mistake in animation, he is more likely to see how the error can improve the direction of the film, rather than as a flaw.

“Leland is the father figure of the program,” according to Adam Giangregorio, a 2008 animation graduate. “He is the general go-to guy with problems and questions.

Gentile tends to focus on the technical aspect of animation and how those skills will lend themselves to a strong future and professional career.

“The three of them really balance each other out,” Giangregorio says.

In one class, Johnson asks his students to gather ‘a bag full of crap’ that they acquire throughout their day, pushing the importance of visual design, rather than storytelling, and to focus a film around one of those pieces. “I’m secretly tricking them into making beautiful things without thinking,” he says.

“It’s about making as much as possible with a small amount of resources,” says Madden, who created Bob Cobbing with clay and lots of photocopies.

Johnson describes the professors’s teaching philosophy in the animation program as “technology transparent.” He builds strong animation students not by spending hours teaching the latest editing software or studio technology, but by building strong critical thinking, design, and creative foundations in classes.

“Students today can learn relatively quickly, as opposed to when I learned and it took a month to get film back. Now there is immediate feedback,” Johnson says.

MassArt animation classes also center around feedback from peers and professors and engage students in painting and drawing with charcoal, rather than how to master computer-generated programs like Maya.

“We teach to the idea, not technology,” says Johnson. “It’s more viable in the workplace.”

Graduates have found work at local Boston production houses, in New York City, and in Los Angeles. Alex Butera, a 2007 graduate, and Lindsay Small, a 2009 graduate, are currently working with The Cartoon Network on new projects.

Kara Nasdor-Jones won the Grand Prize for Best Student Animation at the Ottawa Festival in 2008 with her film I Slept with Cookie Monster.

At the end of their degree program, animation students leave MassArt with a strong portfolio, including about 15-20 completed films, deep critical thinking skills, and maybe even a spot on a Squealing Pegs reel. “They all seem to have success even though they’re not all A or B students,” Johnson says.

Giangregorio proved his skills last summer at Element Productions, where he worked with the Discovery Channel creating commercial bumpers for the show, How Stuff Works.

One of Giangregorio’s films, The Day the Monsters Came played both in last year’s Squealing Pegs show and also in the MFA’s screening this past February. In the film, mummies and monsters (inspired by a class on Ancient Egypt that Giangregorio was taking at the time) run rampant, supposedly ruining the human world.

“The idea came out of nowhere,” says Giangregorio, who let his mind wander in class and ended up with a poem that became the premise for the film. It draws a parallel between monsters and humans in which the humans end up as the real monsters as a result of their self-righteous and arrogant actions.

The styles featured in his film are 2D animation and rotoscoping, which Giangregoio saw used in Ottawa in 2007. The rotoscoping style “makes humans appear more realistic and intimidating than the monsters,” he says.

All in all, Giangregorio’s film, which was his senior degree project, involved an entire school year of work, starting with the idea, doodles, and storyboards, and then moving to the animation and editing. “Thinking back, the animation was the easiest part,” he says. “It’s a matter of putting your head down and just drawing. Most time is spent fixing things and making it work.”

At the end of the school year, the three professors come together and judge the senior degree projects to choose a number of films to feature in the Squealing Pegs show. Those not chosen will be shown with other undergraduate work at the Wednesday night show, Peggin’ Out, for which no admission is charged.

“If they’re paying, it’s worth it,” Johnson says about the caliber of films seen in Squealing Pegs.

This year, Madden could be on the docket with his latest film and while the nominees will not be named until the first week of May, he feels confident in his work whether he makes the final cut or not.

“I know how much time and effort I’ve put forth into this film. I don’t really care what anyone says. I’m satisfied with it,” Madden says. “I’ve put all the effort in I can.”

Regardless of the presence of his own film, Madden plans on attending both the Squealing Pegs and Peggin’ Out shows, as will former student Giangregorio and numerous other animation students and fans, because ultimately the show offers a look into the mind of developing filmmakers.

Madden says, “It’s a big deal to see what the whole department has made over the course of a year and it’s so different from before because new people are making it.”

Learn more about the animation department at MassArt here