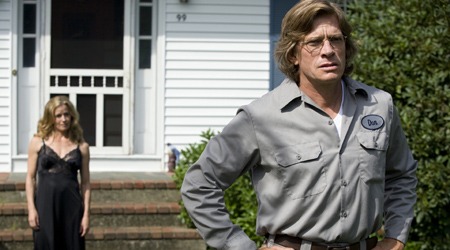 The Way We Get By (by Gita Pullapilly and Aron Gaudet) picked up a Special Jury Prize at SXSW and the Greg Gund Memorial Standing Up Film Competition at the 33rd Cleveland International Film Festival last month. The documentary is about a community of volunteers who greet US troops as they fly in and out of a Maine airport, one of whom is director Gaudet’s mom. Boston area audiences can see The Way We Get By at the Independent Film Festival of Boston (IFFB, April 22-28).

Other locally-influenced docs at IFFB include Johnny Cash at Folsom Prison by Bestor Cram, Luckey by Laura Longsworth, The Lost Son of Havana by Jonathan Hock and Chip on My Shoulder by Ian McFarland — both about Boston subjects — Trust Us, This is All Made Up, directed by former Bostonian Alex Karpovsky (The Hole Story) and produced by IFFB program director Adam Roffman, For the Love of Movies: The Story of American Film Criticism by Gerald Peary and Amy Geller and Shooting Beauty by Courtney Bent and George Kachadorian. Beauty is profiled in this issue by Christine Morrison. On the feature front, IFFB screens Beeswax by Andrew Bujalski and Children of Invention by Tze Chun.

The next Mass Production Coalition meeting is scheduled for April 2nd at the BU Photonics Center.

The Southeast New England (SENE) Film, Music & Arts Festival debuts April 2-5 in Providence with plans to screen more than 60 feature and short films… and there’s music! The spotlight on films from RI, CT, and MA, includes a screening of the feature Fate Scores, starring Boston actor Albert Chan, who also wrote and directed. The film’s setting is a city park bench and Chan writes that, “ethnic minorities make up about half the cast.”

Chan grew up in Toronto and has spent the last 12 years in Boston. He’s racked up roles in Brotherhood, Underdog, and Ghosts of Girlfriends Past (among others) and managed to earn a PhD from MIT. “If I were completely immersed in only an acting career, I’d probably be sitting around going crazy half the time, picking apart all the auditions I’d recently done,” he explained. He likes the life balance of having a day job and hones his acting chops with ongoing training, and now, writing/directing. His film screens at several festivals this month including April 25th as part of the Boston International Film Festival.

Poet and social agitator Charles Polis stood 6’ 8” tall and is said to have coined the term “postmodernism.” He also devoted his life to preserving his Gloucester, MA home from overdevelopment. His work as depicted by filmmakers Henry Ferrini and Ken Riaf will get its due with several PBS airings of Polis is This: Charles Olson and the Persistence of Place this month, also National Poetry Month. Following are the air dates: April 5th at 7 pm on WGBH-Boston; April 13th at 9 pm on Rhode Island PTV; April 19th at 1 pm on WGBY-Springfield; and April 29th at 10 pm on Vermont PTV. Air dates for Maine and New Hampshire TBA.

The re-named Boston LGBT Film Festival (formerly the Boston Gay & Lesbian Film & Video Festival) will celebrate its 25th anniversary May 6-17 with some exciting changes… find out more and toast the festival’s past and future at the website launch party on April 6th, 6 pm at Banq in Boston’s South End.

“I spent four years exploring life in a working-class Catholic parish in Lawrence, a former mill town north of Boston. Scenes from a Parish is the story of an Irish-American church coming to terms with the Latino city that surrounds it.” So writes Newton, MA filmmaker James Rutenbeck of his latest documentary. Scenes premieres at the MFA, Boston on April 8th with screenings planned through the month, including the Boston International Film Festival.

WGBH has invited NewEnglandFilm.com readers to a sneak preview of After the Mayflower, the premiere episode of the upcoming five-part series on Native history, We Shall Remain, followed by a discussion with producers Mark Samels and Sharon Grimberg, cultural consultant Cassius Spears (Narragansett) and language consultant David White (Nipmuc). The event takes place April 9th, 6:30-8:30 pm, at WGBH’s Yawkey Theater in Brighton, MA; it’s free and open to the public, but reservations are required. Read this month’s coverage of We Shall Remain here.

Watch short films and benefit The Ellie Fund and the Breast Cancer Fund at LUNAfest on April 15th at Hard Rock Cafe Boston. Reception starts at 5:30 pm. LUNAfest is accepting film submissions for next year through April 30th.

The next meeting of the Maine Film & Video Association is scheduled for 5:30 pm on April 16th at WPXT Studios in Westbrook and features the Maine premiere of Johnny Cash at Folsom Prison. The documentary’s executive producer Louise Rosen (of Brunswick) and associate producer Dominic Mussachio will be present for post-film discussion. Discussing film tax incentives in Maine is also on the docket.

On April 17th 27 Down premieres at the Regent Theater in Arlington, MA. Written and directed by John Depew, the mystery/thriller uses a crossword puzzle “as a metaphor for predicaments the characters must untangle in their lives.” The production used Boston area locations as well as local crew.

The short film Homeland, shot on location in downtown New Bedford, MA last year, will screen with other films from the South Coast on April 19th, 7 pm, at the Zeiterion Theatre.

Women in Film & Video/New England will present Killer Poet, about one of America’s most wanted fugitives, Norman Porter, who escaped from a Massachusetts prison and became poet JJ Jameson. Director Susan Gray will be present to answer questions after the documentary screens at MIT on April 23rd as part of the Chicks Make Flicks series.

The historic Colonial Theatre in Keene, NH will be screening a 35 mm print of the 1962 classic King Kong vs. Godzilla on April 24th at 7 pm. “What is especially exciting about this is that the print that we are screening is brand new (struck by Universal Pictures specifically for this event) and has never been touched or screened before,” wrote screening curator Mark Nelson.

The White River Indie Film Festival will take place April 24-26. This month Arlene Distler, who coordinates the Women’s Film Festival in Brattleboro, writes for NewEnglandFilm.com about Taking Root, a documentary that screens at WRIF and airs on PBS.

Submissions are open for the Newburyport Documentary Film Festival (September 25-27, 2009) until June. If you are interested in submitting a film, use the With-A-Box link on the festival website.

“Married a year, we thought it was about time we moved in together,” says Rule/Boston Camera Rental of their new locale at 1284 Soldiers Field Road in Boston. The merged companies offer pretty much anything a film (or video) maker needs, to rent or buy. One bonus of the new space is a classroom for community workshops.

Nathan Beaman of Burlington, VT emailed to say, “We’re working hard to get film incentives passed in Vermont — please help us spread the word.” The we, in this case, is the newly-formed Vermont Film and Media Coalition, and Beamon is the group’s president. The group is working with a lobbyist to pass film tax incentives, with the hopes of doing so in the current legislative session.

Cooling news reported by the Rhode Island International Film Festival: Roger Williams University was invited to be a founding partner in CNN commentator Frank Sesno’s latest web-to-broadcast project Planet Forward. Nine communications students, working closely with professor Michael Scully and assistant vice president Judi Johnson, produced 13 short videos on the topic of sustainability, including wind power commuter rails, green buildings and biodiesel and featuring students and faculty from RWU. The videos have been accepted for inclusion on the Planet Forward website which launched on March 6th, and some of them may appear on a PBS pilot of the same name, airing April 15th.