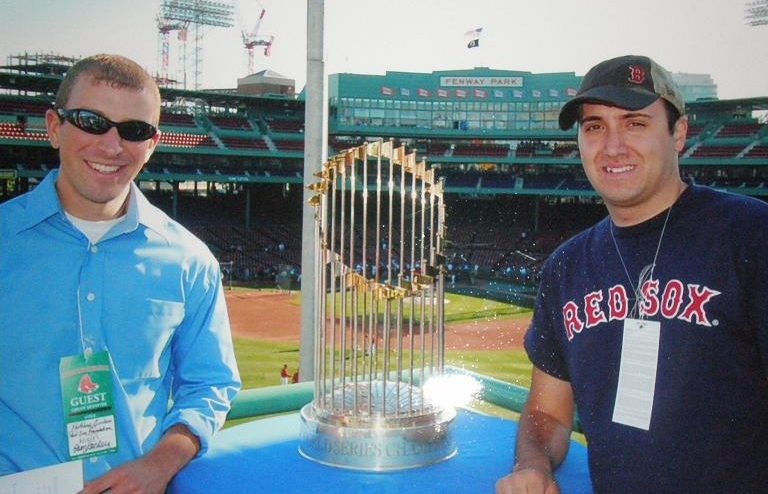 Share
Matthew Giordano describes how his documentary-in-progress For Boston shows Boston’s brighter side, inspiring him to lead by example and give back to the community.

The morning can really make or break your day. Normally I grab my coffee, turn on the television and briefly hope that the local headline will be different from the day before: violence, corruption, greed. Everyday we’re reminded of our few failures as a community, but how often are we praised for our many accomplishments? So I decided to make For Boston, an independent documentary which aims to show a side of the city and its people that hasn’t been fully represented in a long time — the good side.

The idea is to highlight socially responsible leaders with a link to Massachusetts whose actions radiate goodwill and a sense of community. In the summer of 2007, my friend Jeremy Ellis and I started conducting interviews to ask leaders about their inspiring experiences, their community, and their passion to help people in need. The film hopes to capture useful advice on how Generation Y can be a part of the solution. This film is our way of saying, “We want to learn, and we’re listening.”

The inspiration for this film sprouted from, of all things, homesickness. After high school I studied business at the University of New Hampshire. I then moved to Australia for four months as part of a study abroad program where I took several classes in film production. While abroad, I came across a list of production companies that offered internships in Los Angeles and spent the semester applying to every last one. Countless companies sent me more “thanks, but no thanks” letters than the laws of probability allowed. Most companies didn’t want to take a chance on a business major from the East Coast when they had hundreds of film majors in their backyard. Days before my flight back home to Boston I finally got a break and was invited to interview at Paramount Studios. I got the job and moved to Los Angeles directly from Australia.

While working in Los Angeles that summer I realized how long it had been since I was last home in Boston. I started reading local papers to keep in touch but every headline was depressing, and the more I read, the further from home I felt. I had a lot of down time at the studio so I started looking for positive stories, stories of people helping people in an effort to remind me of the home that I knew existed. What I uncovered was an endless list of people from Massachusetts that were helping causes and people in need. I started keeping a list of their names.

When I moved home I enlisted Ellis to make this idea into a short film. He had just graduated from Fitchburg State with a degree in film and was currently working at Avid Technology in Tewksbury. Ellis and I were both buried in student loans and knew right away we would have to get creative to find a way to make this short. Both of us had film and editing experience, but neither of us possessed a decent computer or a modern camcorder. I found a contest online that called for Best Movie Spoof; grand prize was a new MacBook Pro. Only catch, submissions were due in four days. I rummaged through my attic and found my old Cannon Z45 mini-DV and we started filming the next day.

I knew right away that our movie spoof would have to be extremely well edited and entertaining if we were going to compete with such a low quality camcorder. In our spoof of The Departed, The Depa-ah-ted, we poked fun at ourselves and the storyline, while filming at actual locations featured in the original. It was a hit! A month later we got a call from the sponsor congratulating us on a job well done and the computer was on the way. Inspired by our victory, Ellis went to work at Avid and told them about our idea for the short film. His superiors allowed us to use their equipment and before we knew it, we were headed to production.

We started filming in the summer of 2007. We pitched the idea to five role models from my list, including Thomas Menino (Mayor of Boston), Josh Kraft (CEO of Boys and Girls Clubs of Boston), Paul Leech (chief administrative officer of Dunkin Brands), Sean McDonough (ESPN broadcaster), and Meg Vaillancourt (executive director of The Red Sox Foundation). Every person we asked was so supportive of our vision, offering us advice, contacts, and most importantly amazing interview content.

During interviews we’d ask a variety of questions. What is your connection to Massachusetts? What inspired you to get involved in your community? What advice would you give the next generation? We wanted each interview to be as convenient and authentic as possible, so most times we would travel to the subject’s place of business whenever he or she had a free moment. At the time, I was working for a financial firm located in downtown Boston. When I got a call saying the Mayor had some free time tomorrow at noon, I found myself being an accountant by morning, producer by lunch, and then an accountant again by evening. All five interviews were conducted during lunch breaks, weekends, or vacation days. During production I was truly inspired by these five individuals and decided to take steps to be a person and filmmaker that leads by example. But how does one do that?

We decided to hold a fundraiser to benefit the foundations that were part of this film. We hosted 50 bowlers at Lucky Strike on a Tuesday night in August of 2007. From the proceeds we donated a total of $1,300 to seven different charities. Family and friends donated $25 each and Lucky Strike gave us bowling shoes, an appetizer per lane, and bowling for two hours for free. In return, Lucky Strike had a full house on a normally slow night where they could profit from the bar and additional food.

By January of 2008 we completed our short film, which we called The Heart of the City, and Ellis and I took on several other small projects, including online contests where we found some success. That September I volunteered for the Boston Film Festival; most of the films that were part of the festival had a producer, director, actor, or writer that was from Massachusetts and I spoke with some of them about our short. I started to think how special it would for the city, the festival, and the people who were part of our short film to have a feature length version premiere at the Boston Film Festival. It might even be an inspiring story for media outlets and would give us the chance to promote some of the causes and foundations associated with the film.

Since last September we’ve been working on a website, saving money for more equipment, and researching new interviews. We just recently started contacting people for interviews and plan to be filming several exciting ones this month. Some people that I’d like to interview in the near future are Clementina Chery (Louis D. Brown Peace Institute), Theo and Paul Epstein (Foundation to be Named Later), and Bert and John Jacobs (Life is Good Kids Foundation). Hopefully we’ll someday reach out to Boston’s A-list charitable side such as Matt Damon (H20 Africa), Denis Leary (Denis Leary Firefighters Foundation), Mark Wahlberg (Mark Wahlberg Youth Foundation) and Ben Affleck (Small Change Campaign). We also will continue to plan fundraising events during production to ensure that every foundation will receive a donation from our film.

This film has started to represent something much more then just a series of interviews. It represents a loyalty and support that can only be seen in the small city. It represents a need for change and public awareness for so many causes that often go unnoticed. Most importantly it represents that regardless of where you call home, people still care; and there are far more good people building the world up, than there are tearing it down.

Keep up with For Boston at http://thisisboston.blogspot.com/.

Keep up with For Boston at http://thisisboston.blogspot.com/.