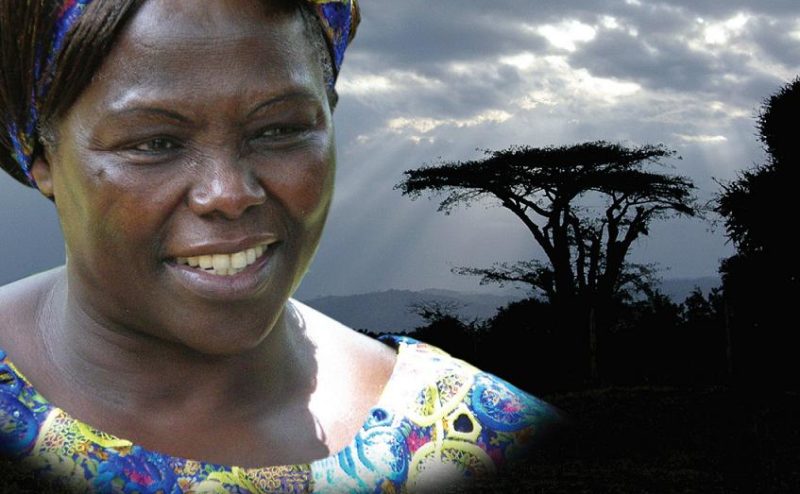 A Tree Grows in Kenya, and Vermont

Traveling back and forth between their home in Marlboro, VT and Kenya, filmmakers Lisa Merton and Alan Dater together raised funds, directed, produced, filmed, edited, and re-edited their documentary Taking Root: The Vision of Wangari Maathai and the Green Belt Movement.

In the film, which documents the work of Wangari Maathai, the first African woman to earn the Nobel Peace Prize, Maathai’s presence fills the screen with her outsized personality, intelligence, and a passion to help her people.

For six years, the couple has faced the challenges of getting an independent film made and then into international film festivals and to corners of the world that need desperately to hear its message — all business-as-usual.

In their very cozy home/studio/office in a rustic abode off a dirt road, Merton and Dater described how they and their company, Marlboro Productions, came to be involved in this project.

Dater breathed deeply and began. “In 2002 I was asked to make a 15-minute fundraising film for the Marion Foundation — they helped to fund the Green Belt Movement founded by Wangari Maathai, which has enlisted thousands of women in the cause of planting trees all over Kenya,” he said.

“Lisa and I went to Yale University to get archival footage of the movement and to meet Wangari, who was teaching there for a semester in the school of forestry,” he continued.

“At first [the film] was going to be about the Green Belt Movement only, but when we met Wangari we knew our film had to be about her — she was such an amazing presence, and her story was too big not to,” Dater said.

Since that fateful meeting, Taking Root has taken over the couple’s lives. “We haven’t just been making a film,” Merton explained, “It’s come into everything we do. Sometimes it’s been overwhelming — but it’s also been amazing.”

Merton said she comes to the film “as an activist at heart,” with a highly attuned sense of injustice in her bones, in her DNA. “My grandfather was rounded up on Krystalnacht,” she explained. “He survived. My father had escaped from Nazi Germany a few years earlier and fled to South Africa.”

Merton was born in Cape Town, South Africa, where her parents lived during the institution of the pass laws, designed to segregate the population during the apartheid era there. “When all their children were old enough to travel, they left for America,” Merton said of her parents. “They didn’t want to raise us under apartheid. But they saw injustice to blacks in this country, too.”

The film starts out with lyrical words and images of Maathai’s beloved fig tree that grew near her childhood home, a “tree of God.” The film goes on to record, through interviews and archival footage, the events — political and personal — that fueled Maathai’s mission to plant trees in her native Kenya.

The movement grew through civic and environmental workshops called, in her tribal Kikuyu language, Wemenye (“Look at Yourself”). Besides the practical question of how to plant a tree, these workshops evolved into a way to change the consciousness of village women, who would complain to Maathai that they didn’t have enough firewood or water to fetch.

While pointing out the legacy of colonialism, the workshops seek to show the women how they can get past fear to quite literally take their lives in their own hands. It is a re-training in attitude.

First seen in a not-quite-complete version at the Brattleboro Women’s Film Festival in 2007 (and winning the Best of the Fest award), the film has since been re-edited and footage added.

The film now also features original music by Samite, a Ugandan musician who escaped from Idi Amin’s dictatorship and ended up in a refugee camp in Kenya. Samite, who now lives in Ithaca, NY, and who played at Brattleboro’s Latchis Theater in August 2008, adds a subtle, rhythmic thread to the film with his musical score.

“The film now has a life of its own,” said Dater, a well-seasoned and award-winning cinematographer.

“It got its lift-off from Full Frame,” which Dater described as “a premier documentary film festival,” where the film won the Women in Leadership award last April.

“Taking Root has also gotten into some of the most prestigious international festivals, including Hot Docs, the documentary film festival,” he said; Taking Root won the Audience Award at the Canadian festival. It has garnered eight other awards, among them Best Feature Length Film Directed or Co-Directed by a Woman at Nashville, and the Amnesty International Durban Human Rights Award at the Durban International Film Festival in South Africa.

The film will be shown on Independent Lens, an independent documentary film program, Tuesday, April 14th on most PBS stations.

The filmmakers believe the strength of the bond they feel with Maathai is about the land. They both have deep connections to the natural world since childhood.

Dater grew up on his family’s farm in Cummington, MA. He milked cows and worked with his parents to grow the food that sustained them, while Merton grew up in rural Vermont with plenty of land, a cow, horseback riding, and lots of trees.

“We share her understanding of the rhythms of the natural world,” Merton said. “The Kenyans always had their close connection to the land, but Wangari has kept it.

“It is the source of her power,” she added with great conviction.

For Wangari Maathai, a long and difficult road led to her accomplishments and the high regard in which she is now held. After coming to the United States with a hand-picked group of Kenya’s best and brightest to go to college through the Joseph P. Kennedy Foundation — President-elect Obama’s father had come a year earlier — Maathai eventually returned to face her country’s future and confront its colonial past.

A big part of that past was the removal of the tribal peoples from their land by the British. As a consequence, their culture, so steeped in nature, was taken from them as well. An awareness of this consequence is at the heart of Taking Root.

The power of stubbornness

“She has connected the dots between environmental degradation and economic and social injustice — it is all around us, in this country too,” Merton said.

This truism may be seen in the US, Merton points out, in the fact that poorer states have the most polluting plants and factories, and consequent poor health.

The desire to do something about the corruption and depleted environment that was making life miserable for her people brought Maathai — who describes herself as “stubborn” — up against the entrenched powers time and again.

In 1977, already a public figure, she made headlines and was jailed for standing up for her rights as a woman in divorce proceedings, calling the judge “incompetent or corrupt.”

In 1989, following actions to keep trees in Uhuru Park in Nairobi, Kenya from being cut for a corporate skyscraper, she was publicly chastised by the country’s leader, Daniel Arap Moi.

One of the more disturbing pieces of archival footage in the film shows Moi addressing the crowd: “Along comes this woman. Can’t you women control one of your own who has crossed the line?” Moi asked the thousands of women assembled for his speech.

Facing derision from even her friends, Maathai called the rebuke “a low point in my life.” But during one of the filmed interviews, an associate in the movement recalled that Maathai “had nothing to lose,” believing the event gave Maathai the courage to stand up to the tyrannical rulers of her country.

The help of many

Taking Root, the film, shares something with the Green Belt Movement, its subject: Both have depended on the help of many working toward a common goal.

“So many people from right here in Marlboro helped us,” Merton said — from writing proposals, to raising funds, to looking at clips, to giving their daughter “a home when we had to travel.”

“We literally couldn’t have made this film without the community,” she added.

Merton and Dater have high hopes for the film’s future. “We want to make this an educational tool,” Merton said. “People working in the deforested parts of the world need it — and want it.”

Taking Root is slated to be shown in Bali and throughout Indonesia in a dubbed version. In Montreal, at the RIDM Film Festival, Merton and Dater made the acquaintance of Nadine Dominique, the daughter of radio personality and agronomist Jean Dominique, who was murdered for speaking out against the regime of Jean-Claude Duvalier in Haiti.

Merton called Haiti the “holy grail” of the environmental movement because all the issues are in bold face, and any actions taken can have a strong impact.

“Environmental justice, economic justice, and social justice are all wrapped into one tight knot…it is where I wanted the film to end, with the Green Belt Movement coming into Haiti,” she said. And in fact, a “chapter” of the Movement started last autumn.

Through Nadine Dominique, a dubbed version of Taking Root will soon be shown throughout Haiti.

When Merton and Dater started their film they could not have possibly known what a gigantic labor of love it was destined to become. Nor could they imagine Wangari Maathai would receive the Nobel Peace Prize two years into their acquaintance, midway through finishing their film.

“When we would tell funders about her and compare her to [Nelson] Mandela or Martin Luther King, they’d scoff,” Merton said. “They no longer do.

“It has taken over 30 years, but her voice, and the cause it serves, has been heard by the world,” the filmmaker added. “This film will provide an understanding of the depth of Maathai’s accomplishment.”