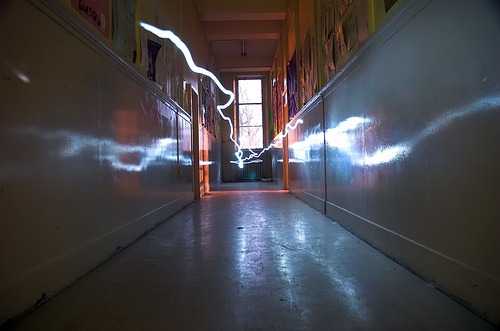 A Day in the Life of a University Media Technician

Share
In a light-hearted celebration of filmmakers’ day jobs, Jared Gordon offers a fictional account of turned-on DVD players and turned-off brains at one of New England’s most respected colleges.

I walk past the Chemistry Department, the Political Science Department, and the Department of the History of Sliced Deli Meats on my way into work. I nod at the students as they pass in the opposite direction, and I click my heels up in the air. They smile and cheer. Yes, they do. For you see, I’m that un-glorified superhero of the nether regions. That unsung savior whose home is the bowels of your heart. That brave knight who leads the charge into the unknown murk of your soul.

A gynecologist? No. I’m a university media technician, and today, I’m all business.

“Jared!” my weedy dispatcher says as I walk into the office. “Thank Shiva you’re here! There’s a problem at Ridgemont Hall that only you can fix! A physics professor’s laptop won’t turn on!”

Poof! I’m at Ridgemont Hall. Room 114. I burst into the place, my (imaginary) cape flowing with the wind. Eighteen students snap their heads in my direction, the half-eaten bagels crumbling down their faces, their milk dribbling down their chins.

They’re amazed. You would be, too.

I stride up to the wrinkled, bearded professor. “What seems to be the trouble, young lady?” I ask.

She points at her laptop, and especially at the very blank screen it currently exhibits. Shoving her out of the way and into a nearby terrarium of snakes, I plug the laptop in and press the on button.

“LIFE!” I scream to the class, and they jump back, stunned at my powers. I turn on my heels and exit, smashing through a plate glass window, eager to see what other challenges await.

When I return to the media office, my dispatcher says, “Jared! There’s a philosophy professor in Worthington Hall who needs to run a PowerPoint presentation off of a flash drive, and he can’t figure out how to start it up!”

He’s talking to a Jared-shaped dust cloud, because you know what? I’M ALREADY GONE.

I land on top of the brick, four-story Worthington Hall and shatter down into the classroom from the skylight. A hysterical professor waves a flash drive at me.

“It’s not fitting anywhere! This is a PowerPoint I made about the philosophy of advanced thermodynamic cogenerational cycles. Now HOW DO I USE THIS?”

Grabbing the hapless drive, I thrust it into a free USB port on the side of the machine.

“There you are, sir,” I say with my hands on my hips and the sun shining on my face, “You were just putting it in upside down!”

I back flip away, down the hall, at lightning speed. “Thank you, mysterious media tech guy!” the professor calls after me.

All in a day’s work.

“Jared!” my dispatcher says all a-quiver upon my return, “There’s a TV hooked up to a DVD player in Margolin House. They can’t work it out, and there’s only one person I know who can. YOU!”

Before he finishes his sentence, I’m at Margolin House. Bursting into a lecture hall filled with over 200 students, they whoop and cheer as I climb up to the podium, setting my sights on the offending television. In a single motion, I turn the TV on, hit play on the DVD player, and hit the TV/VIDEO button on the remote.

The screen flickers, and I’m on my way out of the classroom when…

The class looks at me, their cheering now a distant memory. The TV is snowy and plays no DVD.

I say, “Heh, I’m sure it’s just taking a second to warm up. Here, let me turn it off and back on,” which I subsequently do.

It still doesn’t work. I hear a “Boo!” at the back of the class, and my heretofore dry brow dots with perspiration. Something’s wrong.

I turn to the class and give them a reassuring smile. “Not to worry. I’m sure it’s just a problem with the electric company. It obviously can’t be anything I’ve done wrong here. We can just sit tight until they fix the problem, which I’m sure will be momentarily.”

The students frown and I can feel their disappointment and frustration coursing through me like a splash of cold grape juice down my shapely esophagus. All at once, I hear the sound that all along I’ve secretly dreaded.

I freeze. That laugh…

A door flies off its hinges in the back of the classroom. “Ow!” some students shout as the door falls upon them.

Standing in the doorway is my arch-nemesis, The Crimson Volt. Swathed in a raiment of black and green (as is his custom), he cackles and makes the lights flicker. The students scream and run to me.

“Media tech guy, my head hurts where the door whacked into it!”

Rightfully so, they run under my wing, but The Crimson Volt has never shied away from a battle. He floats over the seats in the room, sparks crackling off of his fingers. The students run for the exits, and I’m left with only the TV/DVD remote control to defend myself. The device heats up in my hand and leaks battery fluid.

“Agh!” I drop it and look up at my enemy. He laughs and the TV explodes. That will be a tough fix, even for a media tech such as myself. Distracted by his own maniacal laughter, he doesn’t see me duck out of the classroom. He’s far more powerful than the last time I confronted him. I’ll need a plan.

Luckily, I come up with one. I hastily spread word to my allies among the campus community: resistance meeting to be held in Gaudy Hall.

The meeting’s attendance surpasses my wildest dreams, and when everyone in Gaudy Hall auditorium quiets down, I begin.

“Friends, have you all brought your remote controls?”

Many people hold up remote controls. Some hold up computer mice, one holds an actual mouse, and about two-dozen others hold up pens, paper clips, and sticks.

“Okay,” I continue, “That should do. We’ll have to lure The Crimson Volt into an open space, and then we all use our remotes to turn him off.”

A professor with 17 PhDs raises his hand. “Question! How do we turn him off with a remote?”

I say, “You point it squarely at his chest and hit the power button. Just like turning off a TV from across the room, or a VCR.”

A wave of disbelief flows over the crowd. A member of the campus community says, “Turning off a TV from across a room? Is such a thing even possible?”

I sigh. “Calm yourself, friends. Remotes transmit a wireless signal to a receiver that activates an electrical pulse that performs the task to which you set it. You just hit the power button.”

Another question. “Sir, what are these ‘buttons’ of which you speak?”

Brandishing my remote, I yell, “We fight!” and we empty out of the auditorium and into the common.

The Crimson Volt hovers over the grass to meet us. Behind him, the science building is in flames, and with it everything that I ever held dear. I clench my remote all the tighter.

“Point remotes!” I yell, and everyone does. The Crimson Volt readies a volley of electrical discharge.

“Fire!” I scream. Everyone throws their remotes, mice, paper clips, and what have you at The Crimson Volt, and they all bounce harmlessly off of his chest. Damn it! I knew that I should have spent another hour training the troops. Oh well.

That arch-nemesis of electrical ignorance fires spark balls and thunder jets at members of the university community. Zap! Whizz! Foof! I grab a member of the college’s janitorial squad.

“You! Trashmeister! Is there a pumping station nearby?”

He points to a nearby brick building. I thank him just before a lighting bolt smacks him in the chest. Ouch!

Running over to the pumping station, I find it locked! Using my karate chop action, I easily break off the lock and enter the building.

Outside, The Crimson Volt fights against three sophomores who have latched onto his limbs. He awkwardly flies himself up against the side of buildings in an effort to dislodge his adversaries.

In the midst of the battle, I call out, “Hey! The Crimson Volt!”

He turns, the sophomores limply clinging to his parts. “Huh?”

I’m holding a hose, and the hose is pointed right at him.

I flip the spigot on the hose, and water barely drips out. Oh no! That’s right! The pumping station is run off of an electrical switchboard, which The Crimson Volt has likely destroyed in his rampage!

He spins around, and the sophomores fly off of him, onto the grass. With sparks crackling from his hands, he flies at me. I turn and turn and turn the spigot, but it doesn’t do anything. He’s coming closer!

That’s when I remember the secret backup generator that only media techs know about. It’s clear across campus though! He’s seconds away from me! I’ll have only one shot at it. I pick up someone’s discarded remote control and throw it as hard as I can. It sails over the buildings, bounces against the steeple, and ricochets through the window of the unassuming little building that houses the generator. It hits the generator switch to its on position.

Water gushes out of the hose and splatters against The Crimson Volt a moment before he has a chance to zap me. He smashes into the ground, soaking wet, while painful-looking purple charges arc and cocoon over his body.

“AAAAAAGH!” he screams, then explodes.

Scores of college students, professors, and staff are strewn about the grounds. They moan, and some struggle to their feet. Some of them bend over fallen comrades, frantically hitting the “power on” button on their remotes. But my job here… is done.

The day is saved. Education… and life… continue. That’s what being a college media tech is all about.