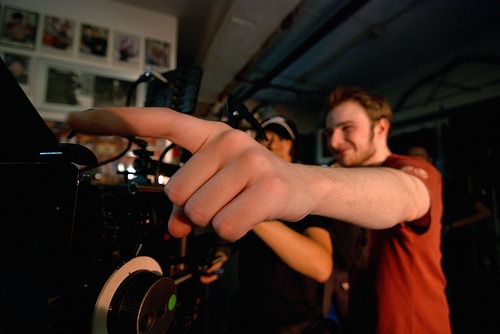 Share
Volunteer actors give of themselves in more ways than one. Raul daSilva offers some helpful advice for first-time and student filmmakers as they begin the process of learning production etiquette.

In the annals of motion picture production we find a handful of producers and directors that were beloved by actors. Two names that quickly come to mind are the late Robert Altman and Clint Eastwood. In Altman’s case it was a matter or sheer intelligence and awareness that performing is an art form. In Eastwood’s case there is the added fact that he is also an actor.

The experience of an actor is not easy nor is it simple. His or her craft engages sensitivities and cognizance far beyond that of the average traveler. This means that heaping abuse upon an actor is like placing a giant magnifying glass upon you and beyond that, placing your intelligence and sense of self into question.

Filmmakers who are planning on making films with actors are urged to take at least one course in acting.

Below I’ve listed a few of the critical dos and don’ts when working with actors. Most of these should be obvious to all of us. Unfortunately they are not.

Actors should not be envisioned as expendable. They want to work and need to work much as a plant needs light so this places them into a place of vulnerability. It’s for this reason that the mature filmmaker should not take advantage of a volunteer actor. A good approach is to demonstrate respect by running auditions on time, addressing each actor personally, and making a point to express your gratitude for his or her interest in your project. Make a point to do this more than once.

Truthfulness sometimes requires courage but it is best not to tell an actor that his or her audition was “wonderful” and “great” if you do not really feel that way. As you would not wish to have your hopes ballooned then dashed by a backer or sponsor you do not want to do this to actors. When your casting decisions are made, find an appropriate and timely way to inform all individuals who auditioned, even those who do not get the part. The simple information is enough. You need not explain your rationale.

If you have solicited volunteer work from actors be quite certain that it is clearly understood that they will not be receiving remuneration for their work.

Maintain business-like and professional levels of communications between yourself and actors. Keep the actors informed by phone or email of all updates and schedule changes. When working with volunteers that you want to show up on set, you may want consult with actors’ schedules before you make final decisions.

During production, do not keep an actor waiting for an inappropriate length of time beyond the planned shooting schedule. Doing so is abusive behavior.

If you have extras, do not address them as ‘atmosphere.’ If you enjoy being called “atmosphere” then go before a mirror and tell yourself that you are atmosphere. Extras can be called extras since this is a time-honored nomenclature. However all actors with lines should be addressed by name.

Keep in mind that most actors want to work for pay. If you hire an actor then he or she must be paid and on time. If you do not have the budget for your project do not engage others with the promise of payment that you do not have nor intend to make. If you hire a non-actor for any reason the same rules apply. An individual who agrees to work for pay is in contract with you even if with just a handshake agreement. Do not become a filmmaker if you find that you are not capable of being responsible. Do not offer deferments that you do not intend to pay. Do not believe for one second that bad behavior will by some strange chance go unnoticed or that you will somehow manage to escape it as you continue your upward climb as a filmmaker. Build your reputation from day one. Do not destroy it from day one.

If an actor has any part in your project you are obligated by honor to provide that actor with a copy or print of the final project on CD or DVD. With today’s technology it’s of course also possible to email the actor a clip for his or her reel.

Remember that an actor’s success is also your own. Include actors in your publicity and outreach. With your actors’ approval, offer them to press as interview subjects, and keep them posted on your film’s screenings, awards, and success. And likewise be willing to share in your actor’s announcements of success.

The way that you behave with anyone in this small community is the same but actually amplified in the consequences that you will incur with neglectful or irresponsible behavior in the greater outside world…beyond film.

Should you have any additional questions on this subject please write to me at NewEnglandFilm.com and I will make an effort to respond in a future article.

Should you have any additional questions on this subject please write to me at NewEnglandFilm.com and I will make an effort to respond in a future article.