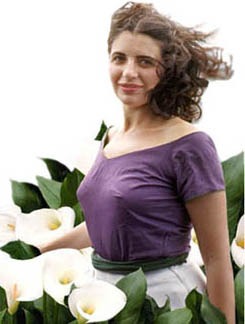 Share
Cindy Kleine discusses Phyllis and Harold, a documentary in which she questions her parents’ satisfaction with their 59 years of marriage, screening this month at the Boston Jewish Film Festival.

In an era when the failings of our credit and mortgage system have led to an international crisis not seen since the Great Depression, the sunny Leave it to Beaver mythology of the post-WWII American family and its idyllic lifestyle seems but a distant dream. And yet the fantasy of the nuclear family happily dwelling in their suburban tract houses dominated the American cultural and psychic landscape for at least two generations. Cindy Kleine’s Phyllis and Harold is one of several early 21st century films to confront this mythology head on.

Forget about Father Knows Best, Kleine has us asking whether father (or mother) knew anything at all and wondering if we can trust their recollections. Scenes from her parents’ marriage raise complex existential questions: What is truth? What is memory? Was there ever and can there ever be a ‘happily ever after’? Kleine’s documentary may lead viewers to break faith with the institution of marriage but not with the power of art to help us come to terms with an often painful remembrance of things past.

Deborah J. Hahn: Phyllis and Harold took you 12 years. How did your artistic vision evolve during the filming?

Cindy Kleine: My artistic vision for the movie evolved in response to my ongoing life with and editing of the material I already had at any given point, and to the changes that happened over time in my parents’ lives. So, for example, at one time I was conceiving of the film as having three parts, the third part being the two of them getting old together. But I had shot very little of that section when my father suddenly died. So I had to re-consider then where the movie was going, and in fact, the structure of the movie.

DH: What led to the decision to integrate animation into your film, and what was that process like?

Kleine: I see the animation as a sort of Brechtian device. From early on, it became necessary to temper the heavy, depressing, dark subject of the film (dysfunctional family, the ravages of time, death) with humor and lightness — to take you out of the darkness for a moment and see from a different perspective. Humor is a very crucial aspect of my personality and world-view, and the way I have gotten through difficult things in my life — in fact — the way I get through life on a daily basis! So in a sense, the animation is ‘me” or the wackier side of my perspective, if that makes sense. For a long time the film had no, or almost no animation in it, and it was a very different, and much heavier film, which for me did not represent my full perspective.

DH: If I were creating a film series for an art-house theater or college campus, I could imagine showing Phyllis and Harold alongside a classic like Bergman’s Scenes from a Marriage, or the more recent Happiness by Todd Solondz. Do you have other fictional films you think would make a great double feature with Phyllis and Harold?

Kleine: Wow. Thanks. That’s a great compliment, as Bergman is one of my greatest inspirations, particularly Scenes From A Marriage. And Happiness — that’s a great idea. I could also see it paired with The Celebration, After the Wedding, and, well, to get really far out, maybe Rashamon!

DH: Rather than fiction, however, the ideal pairing I can think of is Doug Block’s 51 Birch Street, which was also shown at the Boston Jewish Film Festival, where your film will have its New England premiere this month. Block confronts many of the same themes you take on in Phyllis and Harold: family secrets, infidelity, parent/child relationships, happiness and identity, etc. Had you known about Block’s film before you finished production?

Kleine: Doug Block’s film came out during the post-production of my film. That’s when I heard about it. I avoided seeing it until my film was finished because the subject seemed too close to home.

DH: Do you think your family’s connection to Judaism was a factor in the longevity of your parents’ marriage?

Kleine: I think, in the sense of the Jewish values and culture in which they were raised and lived, yes, definitely. Divorce was not something their friends, or our relatives did. If things were not perfect, or bad, you stuck it out; you lived up to your promise, and if nothing else, you stayed ‘for the children.’ My mother’s lover, when I met him, told me he had married his high school sweetheart, knowing after he came home from college that he didn’t love her, but the families were friends and lived next door, and in their world (i.e. Jewish world) he had to marry her anyway because to not do it would have broken up the family, shocked and disappointed everyone, etc. So he too, had been in a passionless marriage his whole life.

DH: At one point in the film you say that your family’s story is typical of 20th-century Jewish-Americans, with a trajectory leading from first generation working-class immigrants to second-generation Jewish professionals. I would add that your ability to maintain a career as an artist/filmmaker is the next step of the immigrant family’s journey. Did your parents encourage your career in the arts?

Kleine: My ability and good fortune to maintain a career as an artist is in my case most certainly the next step of the immigrant family’s journey. The last question is a bit more complex… my mother was always very supportive, admiring and encouraging of my creativity. In a sense she lived vicariously through me, as she herself was so creative, and in another time or another life would have been an artist. My father, on the other hand, most certainly did not encourage me to pursue the arts as a profession. He wanted me to be, in the following order, a dentist, a dental assistant, a stenographer (he wanted me to go to Katherine Gibbs). And when he saw, by the time I was 17 or so, my continued seriousness about the arts and film, he wanted his friend Gary Lerner to get me a job working in Hollywood for Roger Corman, making horror movies. In other words, he wanted me to make money, and did not understand why on earth anyone would ‘work’ unless you were making money at it.

DH: I was also struck by your comment that your father was always hiding behind a camera during your childhood. Are there any connections between his relationship to the camera and your own?

Kleine: I’m sure it was my father’s relationship to the camera that gave me my interest it from a very young age. When I was 14, he taught me how to use his Leica, and I shot my first roll of black and white film. Also, I’m sure the camera represented some kind of power he wielded, and that I wanted, and a form of protection and separation from whatever was being observed that was, and is, comforting and natural to me. And certainly, his incredible eye for composition and content is something I like to think I inherited from him. He was extraordinarily talented, though he saw his photography purely as a ‘hobby.’

DH: Towards the end of the film, when your mother has moved into Manhattan and the next phase of her life, you show her pictures of what the new owners have done to your former home as a way to prepare her for the potentially devastating sense of loss if she returns for a visit. The family ranch house was so important to the characterization of your mother as a product of post-war suburbia, why did you choose not to integrate a shot of the changes to the house?

Kleine: You are right — the house was SO important — that’s precisely why it didn’t work to show it. The pictures just looked like pictures, and I felt that diminished the enormity of the symbolism of the house. It seemed to work much better to leave the images up to the imagination, to ‘evoke’ the house instead of being explicit.

DH: Phyllis and Harold has been on the festival circuit for some time now. What has reception been like?

Kleine: Audiences love the film, and I must say it has been something of a surprise for me. All kinds of audiences love it, all over the world. It seems, in a way that delights me, to transcend the ‘Long Island Jewishness’ of the particular story and speak deeply to people of all different cultures and backgrounds about family. People seem to see their own lives in it, and relate on a very profound and emotional level, or in some cases seem to be made very uncomfortable by it, but in either case it generates much thought and discussion, and I am happy for that.

DH: After a 12-year-long journey, it must be hard to transition to a new project. What comes next for you?

Kleine: It’s too soon to say. Right now I really need to move through the world as a blank slate, being very empty, in a sense, as a way of resting from the enormous undertaking of the last many years of life and of this project, and letting impressions and ideas flow through me without trying to hold on to them. When inspiration comes, it will come. I have lived long enough to know and trust that!

Cindy Kleine studied film at MIT and the School of the Museum of Fine Arts. She lives part-time in New York and Cape Cod. Learn more about her work at www.cindykleine.com.

Cindy Kleine studied film at MIT and the School of the Museum of Fine Arts. She lives part-time in New York and Cape Cod. Learn more about her work at www.cindykleine.com.