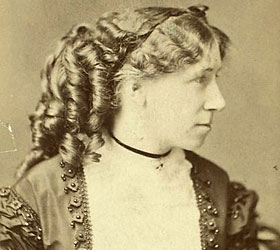 Staying True to Louisa May Alcott

Share
Through painstaking research and a commitment to historical accuracy, Harriet Reisen and Nancy Porter’s documentary introduces a new dimension to the life and work of a literary heroine.

Viewers erupted in applause after a Saturday afternoon screening of Louisa May Alcott: The Woman Behind Little Women at the Museum of Fine Arts, Boston.  Alcott may be a local legend but so are her recent biographers, filmmakers Harriet Reisen and Nancy Porter, and this crowd showed their admiration.  Reisen and Porter took the stage and graciously thanked the audience for supporting a project that has been “simmering for a while.”  Pulitzer Prize-winning Alcott scholar and expert featured in the documentary, John Matteson, joined the filmmakers for Q&A and to discuss his own research.  This event was part of a special engagement at the MFA.  Later this fall it will be broadcast on the PBS series, American Masters.

“We’re old friends,” says Porter, about how she and Reisen originally teamed up after working together in public television at WGBH.  Both women boast an overwhelming amount of credits: Porter has been producing, writing and directing documentaries for more than 25 years, collecting awards that include an Emmy.  Her last NOVA documentary about Typhoid Mary (The Most Dangerous Woman in the World) garnered an Emmy nomination.  Reisen has worked in television and radio, producing and writing for networks from WGBH to HBO to National Public Radio.  She writes for magazines, teaches, and is currently working on a Louisa May Alcott biography to be published in fall of 2009.  In the early 1980s she founded Women in Film & Video/New England.

Together they produced Louisa May Alcott: The Woman Behind Little Women; Reisen wrote the script and Porter directed the film.

The documentary’s conception had been floating in the minds of Porter and Reisen for years, and finally came to fruition when they landed a National Endowment for the Humanities grant in 2003, an impressive feat for a project without a series affiliation. But Porter and Reisen still had more fundraising to do, so they turned to local sources.

Porter was surprised to find that they were unsuccessful in attaining local funds, a phenomenon that she attributes to several causes: “since it’s an educational film, not affiliated with a special cause or social interest, it’s tougher to gain support; also, people often assume that we will get the money elsewhere.” Reisen and Porter returned to national sources. When the women sent the script to American Masters, “they loved it,” Porter recalls.  This was an honor in the world of documentary film and a boost that increased the momentum of Louisa.

Porter pinpoints one of their reasons for creating this film as “wanting to reveal this strong, independent, brave woman who fought for her beliefs,” beliefs that ranged from abolition to a woman’s right to maintain autonomy from men.  Both the form and the content of the documentary, stemming from years of research and the artistry of Reisen and Porter, reflect the complexity of the woman known for her sweet children’s books.

Reisen, who has harbored a longtime interest in Louisa May Alcott, served as the primary researcher of the documentary. Her voracious study grew out of personal curiosity, or “a deep well of knowledge,” says Porter.  (Reisen had been reading widely about Alcott before she and Porter embarked upon this project.)  In terms of her additional research, interviews with Alcott scholars and investigation of primary sources, particularly Alcott’s personal journals, serve as the factual backbone of the film.

Reisen and Porter’s devotion to creating a realistic depiction of Louisa May Alcott is evident in the film’s script: all of the film’s dialogue was compiled from accounts of actual events. Not a single line of dialogue from the mouths of such historic characters as Alcott, her father Bronson Alcott, and their close family friends Emerson and Thoreau was invented.  While Reisen imagined certain scenes, lines from letters, copious notes from Alcott and her father’s journals, and other primary sources inspired all dramatic sequences.

Throughout the research process, Reisen and Porter were fascinated by the complicated portrait that emerged. “The most surprising thing that I discovered about her,” says Porter, “was the fact that she was trapped writing juvenile fiction,” just one revealing detail of many explored, which becomes a much darker picture than most would expect.

Scholars appear onscreen in an ongoing discussion that weaves the film’s dramatic sequences together, rounding out this complex portrait.  Matteson and author Geraldine Brooks, who won a Pulitzer Prize for March, a novel based on Bronson Alcott, appear prominently alongside other Alcott researchers.  From Dr. Norbert Hirschhorn, who collaborated with other scholars to retroactively diagnose Louisa’s chronic illnesses and resulting death, to Dr. Leona Rostenberg, who discovered Louisa’s secret literary identity as a pulp fiction writer, the documentary’s scholars present provocative truths about the Little Women writer.

“We wanted to bring a refreshing approach to the form of the historical documentary,” says Porter, referring to the film’s format, a mix of the dramatic and the traditionally educational.  Alcott, played by four-time Obie award-winning actress Elizabeth Marvel, appears in scene with a mélange of characters, including her family as well as Emerson and Thoreau.

While these dramatic sequences mirror those of a feature film, characters often break the scene by speaking directly to the camera in order to expose a personal truth or sensibility extracted from their personal documents. “We didn’t want the whole thing to be talking heads,” said Porter, “we wanted to create a flesh and blood Louisa, and allow you to become involved in her life.”

The film also employs graphics and animation as a visual technique in order to illustrate Louisa’s imagination.  These compilations create the surrealist atmosphere of the writer’s imagination, and provide a varied visual landscape for the documentary, which otherwise is deeply seated in realism: even the dramatic scenes were largely shot in their original locations, such as Fruitlands (Harvard, MA) and Orchard House (Concord, MA), the famous homes of the Alcotts.

The October 18th screening includes a conversation about filming in historic houses with Jan Turnquist, director of Orchard House Museum and Maud Ayson and Laurie Butters, director and curator of Fruitlands Museum.

“The response has been terrific,” says Porter, who has been delighted to view the film, especially its graphics and dramatic reenactments, in a large screen format.  Now that the documentary, a project over seven years in the making, has been completed, Porter will submit the film to festivals.  Meanwhile, Reisen will continue working on her Louisa May Alcott biography.  “It’s very gratifying,” says Porter, to anticipate their film’s debut on American Masters; it will appear in fall of 2009 on the PBS series.

Screenings of Louisa May Alcott: The Woman Behind Little Women at the Museum of Fine Arts will take place on October 11th and October 18th.  Visit www.mfa.org/film for more information.

Screenings of Louisa May Alcott: The Woman Behind Little Women at the Museum of Fine Arts will take place on October 11th and October 18th.  Visit www.mfa.org/film for more information.