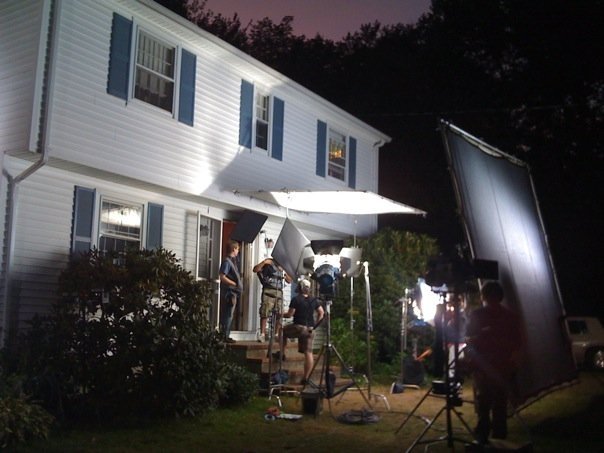 Share
An independent feature chooses Massachusetts over New York to the benefit of local crew members.

Story details have been purposefully muddled, but I can tell you this much:  Don McKay involves cops.  Cop cars.  Possibly sirens.  Handcuffs.

The feature stars Thomas Haden Church, Elisabeth Shue, and Melissa Leo — you may know as much since they’ve all appeared in the local press.  But the folks who haven’t yet are exactly who is interesting to NewEnglandFilm.com.

The film was shot largely in North Andover, MA, with a majority of locals crewing the 23-day shoot.  Chris Stinson, who shares his expertise about line producing this month, invited me to the set in early September.  The scenes took place in the front yard of a mid-century colonial surrounded by trees.

Stinson may live in LA but he is a NH native and some day would like to work from “home.”  The proximity allowed Stinson’s mom and aunt to visit him on the job for the first time, excluding once in LA, “a long time ago.”

Stinson and Sonya Tateosian, production liaison, gave me the lay of the land, acquainting me with crew roles and introducing me to the locals.  Tateosian, who grew up in Lynnfield, had been running her own business as a personal assistant when she decided to give feature film work a try.  “A lot of skills were transferable,” she said, “it’s just a different clientele.”  What remains constant is the need to fulfill challenging requests in an unrealistic amount of time. Those tasks could include securing last minute flights or finding a replacement prop, pronto.

She has had steady film work since last summer, adding The Women, This Side of the Truth, The Box and The Surrogates, to her resume.

Ilyse Frisch had similar duties as cast liaison.  She described her job as taking care of the actors, which could involve transporting Elisabeth Shue, finding restaurants for her, or camps for her kids.  “She plays tennis… so I play tennis with her,” said Frisch, who used to be an elementary school guidance counselor in Manchester, MA.  She too is shifting her career into feature film.

Several local actors with parts in Don McKay have been appearing in films for decades.  The two I spoke with have held on to day jobs, though the recent boom of production has expanded their opportunities.  I watched while Lonnie Farmer of Cambridge played a somber police detective.  Steve Stapinski, who had a short commute from Andover, was dressed in police blues.

The film is a collaboration between producer Jim Young and first-time director Jake Goldberger who met 10 years ago in a class at USC.   The script that Goldberger wrote originally took place in New York City, said Young.  But they revised it to take place in Boston.  Why the switch?

“Between tax credits and the crews here — a friend said you couldn’t get better crews than here — and it worked for the story,” said Young.

As tape rolled, Young and Goldberger watched the shots on a monitor under a tent, with script supervisor Jill Reurs, of Watertown, taking copious notes nearby.  She showed me how she tracks each take, scene, tape, and more, on a complicated grid.  Goldberger leaned over and the two commiserated on whether or not the last shot had everything he needed.

When the film is finished next year, we’ll know for sure.