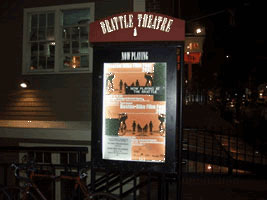 Share
With gas prices, carbon emissions, traffic, parking, and the general headache of driving in the city, biking or watching movies can be the perfect escape. Organizers of the Boston Bike Film Festival want you to escape it all in one weekend.

What do you do if your two biggest passions in life are movies and biking? Well, if you are Cat Bryant you combine the two, naturally.  And so was born the Boston Bike Film Festival, the fourth version of which hits the Brattle Theatre in Cambridge on October 17-18.

Bryant is both an avid bike rider and a passionate film buff.  A few years ago she teamed up with a few friends who shared her enthusiasm and started this festival.  In its fourth year, Bryant anticipates filling the Brattle to capacity, as it has in years past, and generating a lot of excitement in the local biking community.

One of the organizers, Stephen Born, calls the slate of films “idiosyncratic, quirky, but sometimes really quite brilliant.”  Because the judges are not in the film industry, the submission and judging process doesn’t adhere to traditional film festival criteria. They accept films from anyone and anywhere, although many of them are from New England.

While the organizers are still reviewing submissions for this year, Bryant says, “We have received films from all over the country and even a short film from Iran.”  Typically the films selected vary in length in style.  From documentaries to animation and everything in between, the only thing that binds them together is the presence of a bicycle.

In 2007, one of the winners was Take it Or Leave it, a film by Dean Dickinson about BMX riders who do whatever is necessary to ride in empty pools.  Another memorable short, says Born, was from an Australian woman who biked around Peru.  Born is always delighted by the variety of films.  “They are so unpredictable; you never know what’s coming next.”

Born calls the festival “extremely intimate” and likes that it provides a chance for bikers to develop a close sense of community.  Much of the audience networks with each other through bike rides, shops such as Broadway Bike School in Cambridge, or groups like Bike Rides For Ordinary People, run by another of the festival’s organizers, Bruce Lederer.

One of the more unique ways to connect with fellow bike enthusiasts is to join a bike tour of famous local movie locations (planned for Saturday October 18th), which highlights recent improvements to bike accessibility.  (In August, Mayor Menino and City of Boston bike coordinator Nicole Freedman announced the completion of bike lanes on Commonwealth Avenue in Allston and American Legion Highway in Roslindale and the installation of 250 bike racks across the city.)  The tour will swing by locations featured in films such as The Verdict and Good Will Hunting.

Born says the festival’s pro-environment theme has hit a nerve with people, so that this year they’ve added more films, attracted more sponsors and planned more activities than ever.  In addition to film screenings, there will be Q&A sessions with the filmmakers and silent auctions for prizes, such as restaurant gift certificates and donated bike accessories.  Born says the event is strictly “nonprofit, with proceeds going to bike-related organizations such as Massbike.”

Tickets and more info at www.bostonbikefilmfest.org.

Tickets and more info at www.bostonbikefilmfest.org.