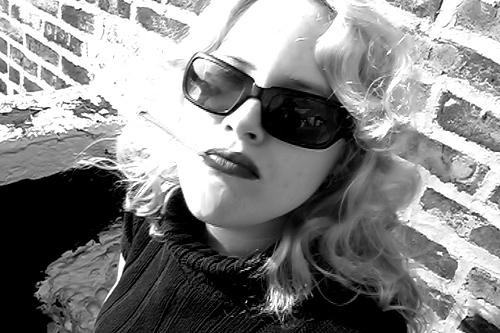 How to Make Low Budget Soundtracks

Share
Kristin Palker, a recent grad of the Berklee film scoring program, sheds light on the process of composition and how indie filmmakers can get a signature DIY sound.

A bad soundtrack or cheesy stock library selection can really hurt an independent film, especially if a filmmaker writes or even shoots the piece with a particular song, finding out later that it costs $50,000 to use.  What do you do when that’s the entire budget of your film times 10?  Times 50?  Find someone skilled at pulling together existing recordings — the mysteriously-named music supervisor — you know, one of those jobs in very small font on a credit crawl.  Or bring in a composer to record something original or dig through their library of outtakes and castoffs to find something that will fit.  You’d get both with Berklee College of Music graduate, Kristin Palker.  This young composer and music teacher has been crafting a series of quirky and unusual scores, seemingly conjured out of thin air, for the quirky and unusual productions of Terminal Pictures and its driving (possibly only) force, Andre Perkowski.  NewEnglandFilm.com recently sat down with Palker to get her to explain her process.

Sarah Stedwick:  When did you begin to think in terms of composing music and how did it develop during those early years?

Kristin Palker: I was a young kid, about eight or nine, at the circus in North Carolina.  It was almost the end of the show and the orchestra (conveniently located right in front of where we were sitting) started playing the themes from Superman and Indiana Jones.  I had never heard this music played live, and the combination of the live instruments and the colorful visuals of the acrobats perfectly choreographed to every musical swell and pound was incredible.

I began a constant search for that feeling, creating scenarios at home in my head, at my own piano bench… I would sit [there] for hours, playing a song my piano teacher had assigned — some shit from the "little red book of mundane piano," and I would take an idea from it and fly off on my own, creating a cacophony of sound that weaved and distorted the themes until it no longer belonged to "the little red book" but became a part of me.

SS: What happens when you sit down to improvise a piece of music?  What’s going on in your mind?

Palker: Well I try to not put too much pressure on myself to create something great in one shot.  (I experienced years of a creative block due to my own immense pressure to live up to the perfection I thought other composers generated effortlessly).  When I first start a piece of music, I come up with a simple motif or theme — usually four or five notes — and then I play the crap out of it, recording every step of the way.  I’ve found that if I don’t record every second of my improvising, I often forget a lot of the good stuff later that could have given birth to the best kung fu love/zombie Jesus theme ever!  I just keep going, experimenting with tempo, related and unrelated keys, flipping the motif inside and out, and sticking it in different self-made scenarios, much like I did in my early days of composing.

SS: How did attending Berklee shape you as a composer?  Can you think of things that it changed about your music and how you saw it in general?

Palker: Berklee opened up many musical doors for me and exposed me to the technical side of film scoring, which I have to admit still drives me insane.  When I first started the film scoring program, I was completely overwhelmed with all the sampling, signal-flow BS, that often interfered with my music-making process.  There was almost always some technical problem but after many endless days of sitting in the warm blue glow of the film scoring labs with a bottomless cup of coffee and incredibly helpful staff (except for one who shall remain nameless), I started to get it.

Berklee also allowed me to learn with some incredibly talented people who had been successful in the film scoring world and worked with great (and sometimes difficult) directors.  I got a lot of one-on-one time with them to critique my music and tell me how I could improve my union of film and music as well as suggesting some other views as to what the director’s message might have been.  I also got to dabble in music editing and jingle-writing which helped me branch out a bit as a composer.

SS: What advice would you give to young musicians and composers interested in going to schools like Berklee?  How can they best take advantage of what’s offered?

Palker: Well first off, if anyone is interested in film scoring as a career, there are really only two viable options as far as college is concerned — Berklee College of Music in Boston and UCLA in Los Angeles.  As for advice, spend as much time in the scoring labs as possible, soaking up information like a sponge, and don’t be afraid to ask for help.  College can also be a time to develop an over-zealous ego but you’re better off ditching it if you want to get the most you can out of film scoring school.  Also, the people that taught my film scoring classes at Berklee were some of the best in the business.  My advice is to ask them as many questions as possible and make as many connections as possible.  Always keep in touch with them as you never know when one might be able to get you your next film scoring gig.  One of my professors got Christopher Young to give a lecture at Berklee while I was there and he was nice enough to give out his cell phone number to everyone that attended.

SS: What should independent filmmakers who don’t know anything about music licensing keep in mind when putting their films together?

Palker: Music licensing is a tricky animal, one that you should probably avoid if you’re a new filmmaker without a lot of money unless you absolutely need that Bob Dylan song in your next film.  I would familiarize myself with as much public domain music as possible.  Develop a taste for Soviet composers from the Ukraine circa 1953 as those are always free!  Avoid at all costs music with a ton of samples from old songs or rap songs with ’50s samples etc.  This music, as I have experienced from having to license Sony Ringtones, is hell to try and license.  You have to go through a million different publishers, some of which only own 1.5 percent of a recording, to use in your film.  Sometimes it’s easier to simply get a local band to record a song for you and license the song itself instead of the song and the recording.

SS:  Any advice on recording sound while shooting scenes?

Palker: Be especially careful of filming scenes in bars, because not only will you not be able to get the rights for the music, but it will be hell to edit due to all the cutting.  This is why Hollywood movies film bar or club scenes without music and people pretending to be dancing so they can sync it up later.  Or, you can dub the dialogue in later and add your own music and bar ambiance.  Artists like Moby offer their music online for free to filmmakers to play with as they wish and you could find hundreds of other artists online of any genre that would love to collaborate on any project you might have.

SS: Take us through the process of collaborating with Andre Perkowski and other filmmakers on soundtracks.

Palker: During my four years at Berklee, I was told nonstop that film scoring had to be done a precise way with markers, SMPTE time code, and endless calculations that had be done down to a tenth of a second to hit a marker accurately.  Upon working with Andre and other filmmakers, I knew I had to throw most of this out the window.

Andre’s process is very simple.  He sits me down in front of a keyboard with a glass of wine, presses record on Logic and says "play."  When I play something he likes, he says "great, more of that!" and I play "more of that."  He jumps around like a kid and paints the scenes intricately, saying things like "and then he looks upon his mother with hideous reluctance" while hanging excitedly from the ceiling fan.

He tapes everything even the stuff I’m playing just to hear how it would sound with a specific patch or to make sure he doesn’t miss anything.  Sometimes he will get so excited that he can’t help but participate and flips a knob or two even if it’s unwarranted.  The result is a horse of a different color.  We both push each other into directions we wouldn’t have thought of.

SS: Much like the Burton/Elfman, Badlamenti/Lynch creative relationship and probably weirder. How do you know when you’re not being too hard on your work and dismissing a piece of improvisation before giving it a chance to breathe?

Palker: I don’t!  I’m so hideously self-critical that I think much of what I do is crap unless otherwise specified.  Sometimes when I hear the recordings later I will say to myself "Wow, this ain’t bad" and go from there.  It might just be a jumping off point for another idea.  This is why it’s important to record everything. You never know when it will come in handy.

SS: How do you know when a piece of music is complete?

Palker:  When I’m too tired to sit up straight and my fingers are red, raw, and bleeding.  I usually have a small inkling when I hear that final cadence or final note.

Here for an extremely creepy, crackly suite for a five-part 1920s collage serial entitled Silent Shadow of the Bat-Man, shuffling German Expressionism around.
Here for a soap opera organ, theremin/cello arrangements on the soundtrack for another Ed Wood 1950s pastiche, The Vampire’s Tomb.
Here for an hilarious 1980s synthesizer action movie cheese parody score for The Godfather’s Delta Force.