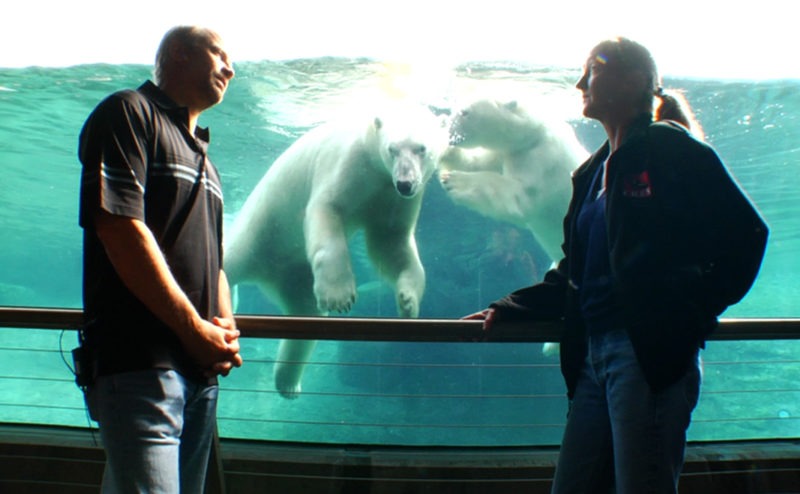 For Dr. Randy Olson, a Harvard-educated marine biologist
who gave up his life in academia to begin a career in filmmaking, it’s always
been about storytelling.  Even after transitioning from his tenured
professorship at the University of New Hampshire to becoming a film student at
the University of Southern California to establishing himself as a director, this common theme has endured.  "As
a scientist, I went into the field, gathered information, then analyzed it in
the lab to try to tell a story of what’s going on in nature," Olson explains.
"In that way, creative storytelling and science share a lot of the same
dynamics."
Filmgoers can experience the marriage of Olson’s two
passions at the Woods Hole Film Festival:  Olson’s second documentary,
Sizzle: A Global Warming Comedy, will screen as the opening night film on
Saturday, July 26th.  The humor and satire of the film, blended with the
opinions of scientists on both sides of the global warming discussion, showcase
Olson’s theory that good, funny entertainment can be a vehicle for action.  At
Woods Hole, panel discussions will follow the screening of the film.
As a marine biologist and professor, Olson was frustrated
with the bland breed of documentaries in the scientific field, and the
storytelling aspects of the hard sciences were beginning to feel a little less
than satisfying.  He began experimenting as a filmmaker, creating a couple of
short films, including Barnacles Tell No Lies (1991), a music video about
the sex life of barnacles, that is still popular in biology classrooms.
Ultimately, dabbling turned into a career change when Olson
enrolled in film school.  He laughs, "I lost my mind, ran away and joined the
circus."  He’s never looked back.
At USC, Olson proved his talent by creating a picture that
was selected as one of the Top 100 Student Films in the history of USC Cinema
School.  Following his film education, Olson juggled part-time teaching gigs as
well as teaming up with fellow marine biologist Dr. Jeremy Jackson of the
Scripps University School of Oceanography; together, the two scientists made
environmentally-focused short films and founded the Shifting Baselines Ocean
Media Project, a compilation of films and commercials that raise awareness about
the toll pollution takes on our environment, while maintaining the sense of
humor characteristic of Olson’s work.

Science (and scientists) can be funny!
[Click to enlarge]

His first feature documentary, Flock of Dodos: The
Evolution-Intelligent Design Circus (2006) utilized the formula that
entertainment spawns interest and awareness, tackling the highly controversial
question of the teaching of intelligent design in Kansas schools.  After
premiering at the Tribeca Film Festival, it ran the festival loop and is now in
rotation on Showtime. In Dodos, Olson demonstrates his devotion to
involving real experts, scientists on both sides of the debate, in the
discussion.  He also proves the importance of communication, especially in terms of
inspiring the masses about environmental concerns: "Communication is the weak
link in the world of science.  Many scientists can’t communicate well, and work
becomes isolated," Olson notes, referencing the very theme that was explored in
Dodos, and remerges in Sizzle.  “Moving images, films, are one of
the most powerful ways to reach people," he says.
"Sizzle is really a combination of three genres:
mockumentary, documentary and reality," comments Olson, explaining that the
film’s primary purpose is to entertain and engage, not necessarily to inform or
educate.  He laughs, "It’s not particularly profound and deep, but it’s fun.
The panels will provide all the information; they will serve as the outlet for
discussion and action."  Two such forums will take place in Woods Hole: one will
discuss global warming and one will explore the role of film in environmental
awareness.
The concept for the film grew out of Olson’s reaction to Al
Gore’s Oscar-winning global warming documentary, An Inconvenient Truth.
"I liked it," Olson insists, "but I wondered: where are all the scientists?
There was virtually no emphasis on global warming specialists."  Olson set out
to make a documentary of his own on the topic, vowing to include the opinions of
scientific authorities.

This catalyst also serves as the premise for Sizzle.
Olson plays himself, a filmmaker struggling to find sponsorship and a crew for
his documentary.  Here, reality and mockumentary overlap: "In the film, no one
in Hollywood will back my documentary, and the only producers I can land are
these two crazy gay guys."  The couple, played by Mitch Silpa (of YouTube’s
famed David Blaine Steet Magic) and Brian Clark, are not terribly
knowledgeable about global warming itself, but are tireless in their pursuit of
the one thing every documentary needs: celebrities.
In terms of possible interviewees, Tom Cruise is at the top
of their list. "But, he’s not a scientist," Olson insists.  "He’s a
Scientologist," Silpa and Clark counter, "and most people don’t know the
difference."  The team is also stuck with a cameraman who is a global warming
skeptic; he’s prone to voicing his virulent opinions during Olson’s interviews
with scientists ("I’m not trying to interrupt or anything, but I think it’s a
scam," he says).  Clearly, Sizzle is a "complete departure from Al Gore’s
strategy," which Olson identifies as the film’s most important element.
Mingled with the outrageous, largely improvised humor are
the experts and their opinions about the global warming issue. "Hardly anyone is
free from some kind of joking," Olson admits, but that does not detract from the
seriousness of the film’s topic.  Olson and his producers are finally advised to
seek the human face of global warming, so they take a road trip to New Orleans.
Years after hurricane Katrina ravaged the homes and lives of Louisiana
residents, very little has changed.  The environmental catastrophe that
shattered New Orleans still plagues the region.  The film links this reality
with the lack of substantial legislation, and the United States’ failure to
emerge as a leader on global warming issues, with actual footage of US
Representatives’ discussions. "The US, the wealthiest nation in the world, has
had immense trouble dealing with this.  Legislation is in shambles.  The US has
made a mess out of global warming," says Olson softly, "and that’s the real
tragedy."  Even in the context of laughter and entertainment, the intensity of
Olson’s message shines through.
The world premiere of Sizzle: A Global Warming
Documentary will take place at the Outfest Gay and Lesbian Film Festival in
Hollywood on July 19th.  Its East Coast "academic" premiere will kick off the
Woods Hole Film Festival, where Olson will be in attendance.  For more
information about Sizzle or to view the trailer, visit
www.sizzlethemovie.com.  For scheduling details, see
www.woodsholefilmfestival.org.