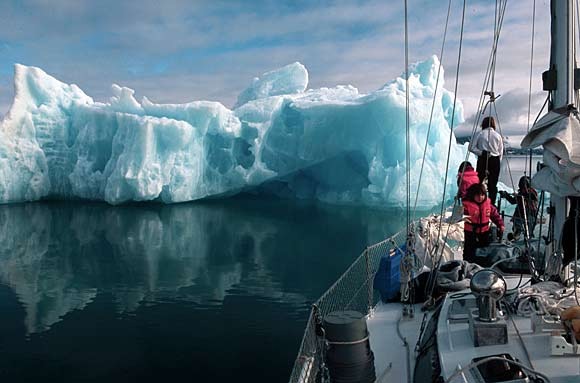 Share
Gregory Roscoe left a stable job to make a film about a family that circumnavigates the globe in a 33 foot sloop.

“Could I get your full street address so I can just plug it
into my GPS?”
This was my initial request of Gregory Roscoe and, upon its
utterance, I immediately recognized the irony.  You see, Roscoe is the founder
of Sea Worthy Productions and the producer of Ice Blink — a documentary
about a family of five that ditched the practiced protocols of everyday living
in favor of the life aquatic.  And here I was, asking for information that would
render my relatively easy course from Boston, MA to Falmouth, ME even easier.
These directions eventually led me to a long, dirt trail
and, subsequently, into Roscoe’s home where we conversed for about an hour.
Roscoe’s course involving the Ice Blink project
started about 10 years ago, when he was working in a managerial capacity for the
Environmental Protection Agency.  “I remember reading newspaper articles about
Dave and Jaja and their journey and I just became fascinated by it,” admitted
Roscoe.  Dave and Jaja Martin are the husband and wife team whom Roscoe decided,
after reading their 2002 book Into the Light, were going to be his first
film project.
“They entirely shunned the way of the wheel,” lauded
Roscoe.  This “way of the wheel” is the Martins’ and Roscoe’s description of
life as it normally happens: high school, college, job, marriage, kids,
retirement, etc. in that order.  The Martins decided that this was not for them
and they chose another direction.  So, too, did Roscoe, the self-described
“accidental filmmaker,” who left the EPA and his home in Andover, MA for the
greener (and less paved) roads of Falmouth to start a production company and set
in motion his own life odyssey.  He, too, had left the wheel.
Upon meeting the Martins and deciding on a concept for the
film, Roscoe inherited a trove of Martin family pictures and 22 hours of film
from life on the boat.  This was to be the meat of his story, aside from the
interview portions, which Roscoe conducted personally in the summer of 2005.  In
fact, most of the film was done in a rather personal manner.  “Every contract
aspect of this film was done with a handshake,” said Roscoe, “except for the
music licensing.”

Lacking any substantial financial backing, Roscoe funded
most of Ice Blink independently, from his children’s college fund.
“After the DVD was released in 2006, 2007 was mainly a lost year,” he
explained.  Lost in the sense that fundraising was hard to come by and Roscoe,
being inexperienced in the movie making industry, began to question his
efforts.  “Because the film doesn’t have death or affairs or teen pregnancy,
distributors were reluctant to pick it up.  They felt it lacked the necessary
drama that would pull an audience in.”
Getting hooked up with public television was Roscoe’s and
Ice Blink’s big break.  After a conversation with American Public
Television, Roscoe got the New Hampshire division to agree to air the film.
From there, Ice Blink was snatched up by PBS World with added
sponsorships by the State of Maine, among others.  Since then, it has aired on
public television stations all over New England, in Los Angeles, in San
Francisco and even in Milwaukee, where it garnered American Public Television’s
primetime rating high for its broadcast on May 25th.
“It’s definitely gratifying to receive word of such
widespread support for the film.  It shows there is still interest out there for
people to see a film without the abundance of negative aspects that seem to
drive films today,” he said.
Short of launching out into the capacious Atlantic for a
decade or so in his own day sailer, Roscoe’s choice of leaving a government job
to navigate the unknown ocean of filmmaking at the cost of his children’s
educational future is akin to rebuking the wheel just as the Martins did, all
those years back as newlyweds.
As for Roscoe’s
future?  It is still unwritten.  As for mine, the next time I venture out to
conduct an interview, I believe I’ll turn my GPS off.
For more information, visit
www.iceblinksail.com.  To watch
an interview with Roscoe on TheSailingChannel.com, click