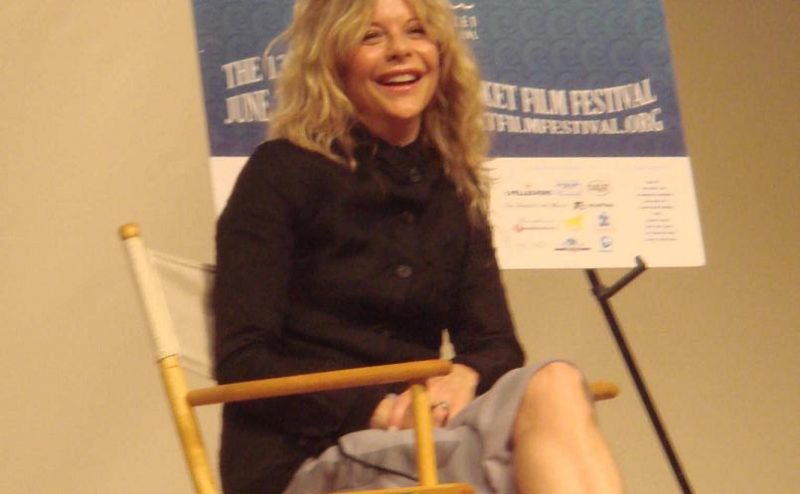 Share
A breezy recap of a festival famed for focusing primarily on the screenwriter's contribution.

A new wrinkle at 13th Nantucket Film Festival — which
usually reserves its kudos for the unsung craft of screenwriters — was the
Compass Rose Acting Tribute awarded to Meg Ryan, who is back into romantic
comedy big-time, having shot four in the past year, including The Women,
which wrapped this spring in Boston, and a festival selection, The Deal,
a keen movie-industry satire co-written by actor William H. Macy and director
Steven Schachter.  The two longtime collaborators — who are now working on a
fall TBS series "set in Buttocks, California" — met at Goddard College in the
early ‘70s while studying under David Mamet.
In an "In Their Shoes" session with Time magazine
critic Richard Corliss, Macy described The Deal — extrapolated from a
"pee-in-your-pants funny" 1991 novel by Peter Lefcourt — as "our love letter to
the business."  Macy described the plot (see below) as a classic "1930s kind of
‘I hate your guts until the third act’ " storyline.  The resulting Macy/Ryan
chemistry is compelling: here the former Cooler is one sexy beast.
Ryan’s award ceremony included a congenial interview by
Leonard Maltin; Macy and Schachter regaled Ryan with a lively ditty
incorporating all her movie titles.  Macy, it turns out, is a self-described "ukelele
virtuoso."
Ryan also lent her star power to a private ceremony in
which Nanette Burstein — doc auteur of American Teen, Sundance’s one
big-ticket hit this winter, and a standout in Nantucket — was awarded the
Adrienne Shelley Excellence in Filmmaking Award.
Shelley, a regular Festival-goer, was murdered two years
ago, before Waitress could reach an appreciative public.  Her husband,
Andy Ostroy, has honored her memory by establishing a foundation to support
women filmmakers (the very pregnant Burstein confessed to feeling "very female
right now").  Ostroy has just finished filming another Shelley script, with
Curb Your Enthusiasm’s Cheryl Hines directing.  Ryan reported that in
Serious Moonlight she plays a high-powered attorney, who, upon hearing that
her husband plans to leave her for a 22-year-old, "says ‘Oh no, you don’t’ and
duct-tapes him to the toilet.’"
With islanders Jerry Stiller and Anne Meara kibbitzing and
frat-humor genius Judd Apatow (The 40-Year-Old Virgin, Knocked Up) as the
honoree, scatological humor ruled at the NBC Universal Screenwriters Tribute.
Apatow jokingly reviled emcee Brian Williams — jetting off to fill in for the
greatly missed Tim Russert on Meet the Press in D.C. — for presuming to
be funny on top of anchor-man handsome ("as if Gepetto made a toy").  Apatow, a
master in the genre of personal humiliation, amused the crowd with anecdotes
drawn from his own show-biz career: the time he was seated next to Penelope
Cruz, for instance, and, in a fit of  "nerd-guy panic" when trying to come up
with conversational fodder, blurted out, "So what’s Spain like?"  He also
recalled pitching, with longtime pal Ben Stiller, whose 1992-93 TV show he
produced, a comedy script to the Rolling Stones.  Stiller referenced Gimme
Shelter, and Keith Richards qualified: "All right, but this time let’s do it
without the murder."

Stiller was missing in action (Apatow surmised he was off
shooting Night at the Museum XI) but would have beamed to see his sister
Amy Stiller breathily ace the Marilyn Monroe role in a staged reading of the
brilliant 1959 script for Some Like It Hot.  Mom (Anne Meara) portrayed
Sweet Sue, bandleader of the Society Syncopators; Kevin Flynn (originator of the
upcoming Nantucket Comedy Festival) and New York actor Louis Butelli aced the
Curtis/Lemmon leads; and John Shea — who got his start in Nantucket community
theatre — killed as Osgood Fielding III.  The biggest challenge facing the cast
was not cracking one another up.
Meara was ubiquitous, also co-hosting — with filmmaker
Peter Farrelly — a late night storytelling session on the theme of "I Should Be
Committed."  Ad-hoc fabulists included Maltin, who both fulfilled and
jeopardized a childhood dream by meeting Pinky Lee; festival jurist (and
actor-turned-filmmaker) Chris Eigeman, dramatizing a near-fatal misadventure in
a Manhattan private poker room; and He’s Just Not That into You co-author
Liz Tuccillo riffing on a diss from the Oprah Winfrey Show.  Several
young women vaunted various neuroses, only to be trumped by Sally Greenhouse,
who sought out McLean’s as an analog to "an artist’s colony, a place where
Robert Lowell and Anne Sexton got a lot of work done."  She very nearly ended up
consigned to a lock-down psych ward: when the doctor confiscated her keys, she
thought she’d scored valet parking.  The ultimate winner in the mishegas
department, though, was Nantucket native Mike Alpert, who, when his kiteboarding
equipment malfunctioned late one blustery afternoon in November 2002, spent 6 ½
hours drifting in the dark amid 15-foot, 47-degree waves.
There was material enough in this one evening to flesh out
a spate of future films.  Two among the score or so of features on this year’s
slate had their genesis at prior festivals. Actor Ross Partridge met
writer/directors Mark and Jay Duplass (The Puffy Chair) at NFF ’05 and
ended up working on the improvisatory comedy/horror flick Baghead.
Nantucketer Will Conroy, screenwriter son of the late Frank Conroy (Stoptime),
met director Brad Anderson ten festivals ago, when the latter showed his
low-budget, soon-to-be breakout hit Next Stop, Wonderland.  The
opening-night slot was awarded to their latest collaboration, the thriller
Transsiberian — which nearly skidded off the tracks at a number of
junctures.
First, Anderson recalled at a talk-back, he nearly
alienated one of his stars, Ben Kingsley, by failing to address him properly as
"Sir."  They were all set to shoot in Lithuania when the female lead, Samantha
Morton, was sidelined by a piece of falling roof; Emily Mortimer subbed
brilliantly, on 24 hours’ notice.  And then the snow — a sine qua non
for simulating Siberia — balked.  When it finally descended, at the eleventh
hour, after they’d run out of interior shots, the entire company — including
Sir Ben — celebrated with a snowball fight.
At one morning
coffee (always the highlight of the festival, for those interested in peering
behind the curtain), jurist/panelist Doug Liman, who taught himself to shoot in
order to direct Swingers (Vince Vaughn and Jon Favreau caught him reading
a manual) and then leapt to The Bourne Identity, summed up the typical
filmmaking trajectory: "All of the things that went wrong led me to the things
that went right."

Quick Hits: A Critical (and
Incomplete) Look at the 13th Nantucket Film Festival

American Teen: You thought maybe that the
stereotypical high-school schema (popular kids vs. nerds) was a figment of
Hollywood’s imagination? If so, it has spread to the heartland. But in this
insightful doc, Nanette Burstein’s "real-life Juno" takes the cake, while
the prom queen comes across as a monster.
Baghead: Four LA actors retreat to a cabin to try to
improvise their own indie film. A joke about a menacing figure masked with a
paper bag soon becomes the real thing — but clues to his/her/its identity have
been laid out like oversize breadcrumbs. Despite an over-obvious plot, all four
real-life actors (especially Steve Zissis as a sweet, romantically challenged
schlub) turn in fine performances.
Choke: Sam Rockwell plays the sex-addict son of
Alzheimer’s-addled Anjelica Huston, who never looked more glamorous.
Writer/director Clark Gregg gives himself some hilarious moments as a
self-righteous "historical re-enactor," but otherwise the supposed comedy has a
hard time bubbling up through the murky photography and dark subject matter.
The Deal: William E. Macy plays a suicidal hack
screenwriter who parlays his naive nephew’s script on Benjamin Disraeli into an
Uzi-packed Mideastern action vehicle for a African-American megastar (LL Cool
Jay), a recent convert to Judaism. When that de Mille-scale production tanks,
Macy and his arch-nemesis, a Hollywood suit (Meg Ryan), hijack the production
and attempt a sub rosa succes d’estime. Hilarity rules throughout.
Elegy: In this insufferable Philip Roth adaptation,
Ben Kingsley plays a New York professor who serially preys on his young female
students, honorably waiting until after he has assigned grades. As his
more-than-30-years-younger inamorata, Penelope Cruz is appealingly collected;
she holds her own. But Kingsley is a walking case of unwarranted amour-propre,
and the palette is depressingly dark — the outlook, even more so.
Flow: A knock-out documentary on the threat posed by
corporate privatization of the world’s water supply. That bottle of Dasani you
so casually acquire? It could be polluted with rocket fuel, or it may mean that
a whole village south of the border is reduced to relying on virtual sewage.
This wide-ranging documentary is such a must-see, it’s set to be screened at
both National Conventions.
Frozen River: This narrative has a documentary feel
and is edge-of-your-seat gripping from start to finish. A hard-strapped mother
in upstate New York (Melissa Leo) teams up with a Mohawk (amazing Misty Upham,
whom the writer/director, Courtney Hunt, cast online) to smuggle illegal aliens
across the St. Lawrence. The film made a big spash at Sundance and attracted
some serious money, so it should turn up soon.
Transsiberian: Woody Harrelson plays an affable
midwestern hardware salesman taking a week-long train ride across Russia with
his wife (Emily Mortimer), who has a bad-girl past. They share a tight berth
with a Spaniard (sleepily sexy Eduardo Noriega) and his 20-year-old American
girlfriend (Kate Mara). If you don’t suspect there’s something punk about this
pair, you too could find yourself at the mercy of a cruel Russian policeman
(ubiquitous Ben Kingsley). You’re in for a tough time anyway, when the movie
veers into a graphic, gratuitous torture scene and forfeits credibility for a
pro forma thriller finale.
The Wackness: Writer/director Jonathan Levine spent
$3 million on this semi-autobiographical portrait of a 1994 Upper East Side
teen, a semi-pro dealer, who’s intent on ditching his virginity. Ben Kingsley
(again!) plays an eccentric sadsack of a therapist who trades sessions for dime
bags. The movie was intentionally tinted a dispiriting muddy brown. Be
forewarned that Mary Kate Olsen — in a cameo as a flower-child who macks on
Kingsley, out of fascination for "weird old people" — is the best thing in it.
For the full film roster, see
www.nantucketfilmfestival.org;
for release dates, check www.joblo.com.