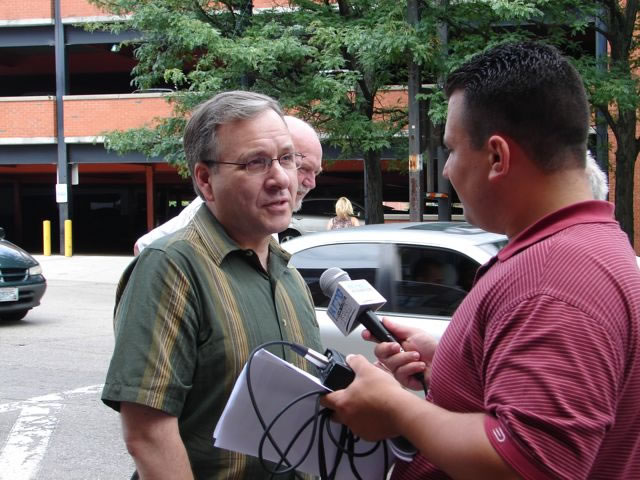 Share
Industry members gathered to discuss how to keep film work in the Ocean State at a recent film forum organized by the Rhode Island International Film Festival.

Infrastructure.  Infrastructure.  Infrastructure.
According to a handful of industry devotees gathered at the last Rhode Island
International Film Festival’s monthly film forum held at Borders Bookstore
inside the Providence Place Mall on May 13th, infrastructure is
what’s needed to attract and retain coveted Hollywood dollars.
Local actors and filmmakers are calling for more than just
financial incentives to help carve out their east coast location foothold in the
entertainment industry.
As it stands, the Ocean State "provides a transferable 25
percent tax credit against the corporate or personal income tax for all
certified costs (including salaries) associated with Rhode Island primary
locations of feature-length film, video, video games, television series, or
commercials," according to the Rhode Island Economic Development Corporation.
Amidst growing concerns about Stephen Alves’ bill to cap
Rhode Island’s tax credits at $10 million, area film and television workers are
proposing full-scale facilities designed to subjugate and localize studio
productions entirely within the confines of the nation’s smallest state.
"Right now, it’s kind of a feeling of let’s exploit the
natives," opined George Marshall, executive director of the Rhode Island
International Film Festival.  Marshall went on to explain how studios are taking
advantage of the tax breaks by shooting in the state, then promptly taking their
unfinished projects, and moreover, potential jobs and money, out of Rhode Island
to post-production facilities in New York or back out to Hollywood.
His contention, which was echoed by most everyone else in
attendance, was that if tax credits are capped at $10 million, what’s to stop
the studios from simply shooting their films, collecting their tax credits, and
picking up and leaving; or worse yet, skipping over Rhode Island altogether in
favor of Connecticut or Massachusetts, both of which also offer generous film
tax credits?  (In comparison, CT’s is 30 percent; MA’s is 25.  The state of
Michigan just passed a 40 percent incentive.)
"The goal is to create a sustainable market for the
foreseeable future, and to do that we need infrastructure," added Marshall.  The
type of "infrastructure" he is talking about includes fully functioning
production houses capable of handling the myriad tasks after the principal
photography, i.e. – editing, sound mixing, scoring, etc.  His thinking is that
if Rhode Island is able to offer all such services required to bring a feature
film from slate to the sliver screen, with no limit on tax credits, it would
behoove all of Hollywood to set up shop in the state, thus propagating legions
of new business opportunities for many other Rhode Island residents.
Testimony from a few actors involved with the production of
such past Rhode Island based projects as 27 Dresses and Underdog
made clear that the area is teeming with professionals ready to further
contribute to the boom on a steadier basis.  Through the relationships they’ve
created from past shoots, they say that Hollywood is enchanted with southern New
England and its filmmaking contingent.
Said Ellen Becker-Gray, a local actress for 20-plus years,
"most of the people I got to know on set who had never been to Providence before
now consider it to be their second home.  They enjoy coming here to work not
only for the vast cultural and historical offerings of our state, but for the
professionalism exhibited by our industry people.  They trust us and our
abilities, and that’s exciting."
Only time will tell if such positive feedback will reach
the ears of legislators in Providence.  For instance, progress remains slow on
the proposed Pacifica Ventures studio in Hopkinton, RI, exactly the type of lure
that would do well for the state to set the hook in the mouths of such big fish
Hollywood studios like Warner Brothers, Dreamworks, or MGM.
Still, in the eyes of Rhode Island’s working film industry
veterans, an uncapped film tax credit and ample establishments to house both
principal production and post-production crews poised to toil away on the next
Oscar contender is a no-brainer for the state.  Plus, there are tons of
quahogs.
For related NewEnglandFilm.com stories, see

Questioning Film Tax Credits and
Sprint
to the Studio.