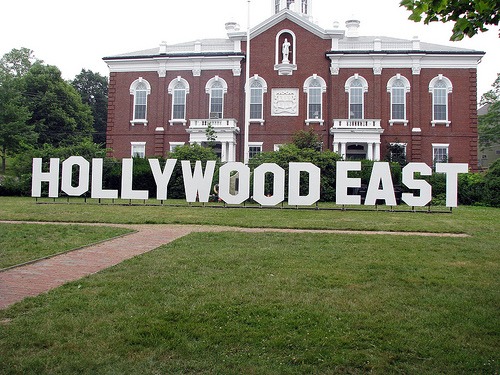 In a rush to claim Hollywood for its own, several New
England communities have co-opted the moniker (Is Boston Beanywood?  NH has a
new television show, Hollywood New England).  But in Plymouth, MA,
frustration came not from the association with glamour-production but when giant
lettering “Hollywood East” (used with permission from the Hollywood, CA
chamber of commerce) blocked a Vietnam Veterans’ memorial.  Plymouth Rock
Studios erected the sign to generate buzz and now has plans to move the sign.
Here is

video.
Speaking of Plymouth, the Plymouth Independent Film
Festival, normally held in July, is re-grouping with hopes for an
abbreviated festival sometime this year, according to festival director Lisa
Mattei.  She expects to announce plans for 2009 in the next few weeks.  Visit
http://plyfilmfest.org /for updates.
You may be thinking . . .isn’t the
Boston Film Festival
normally in July, too?  Yes, but not this year.  Hold on until September 12-18
for the 24th annual.
The Maine International Film Festival runs July
11-20 in Waterville.  Find out more.
Re-design is all the rage, and gender is just one way to
fluidly re-express yourself.  So goes the story of Gender Redesigner, a
doc by Johnny Bergmann, to screen on July 16th at the Brattle Theater, with the
film’s subject, fAe Gibson, present.  Brought to you by
CineMental.
The next day (July 17th), the Brattle hosts a
fundraiser, Trailer Treats, which includes a trailer smackdown.  More at www.brattlefilm.org.

Michal Goldman and Ellen Brodsky’s At Home in
Utopia screens at the MFA, Boston on July 3rd and July 6th and airs on WBGH on
July 27th at 10 pm.
The Woods
Hole Film Festival runs July 26-August 4.  Preparatory reading can be
found here and
here.  We acknowledge our bias in recommending Red Sneakers,
a short by NewEnglandFilm.com’s founder, Michele Meek, which screens on
July 26th at 5 pm. Check out the film’s
site for more information.

Catch the Roxbury Film Festival between July 28-August 3.  More
online.
Martha’s Vineyard Film Festival’s
summer series runs every Wednesday —
starting July 2nd — and promises dinner, live music, and a double feature (a film
for kids at 5:30 pm and one for older audiences at 8 pm).
On Tuesdays beginning July 15th, the
Martha’s Vineyard Film Society
screens films at the historic Tabernacle.  Lots of special guests.
Also on the Vineyard:  the
Hebrew
Center is screening films from the Boston Jewish Film Festival on
Sunday nights at 7:30 — Praying with Lior on July 6th; Three Mothers (Shalosh
Imahot) on July 13th; The Powder and the Glory on July 20th; Making
Trouble on July 27th; Sixty-Six on August 3rd; and Bad Faith on
August 10th.  Many events include special guests.

And yet, even more
on the Vineyard:  Screenwriter, author, and email correspondent extraordinaire,
Andre Perkowski, is summering on the Vineyard with a Smith and Wesson —
oops, I mean a Smith Corona.  Or perhaps it’s just him and Corona (s).  What I
can say is that Perkowski is up to so many different film things (a doc, a
feature, Ed Wood fandom) all at once and most of it funny-sounding, that one
would rather you just remember his name.  Perkowski.  For temporary clarity,
watch this.  PS:  Perkowski collaborates with
Christopher Roy, a one-time resident of Fort Kent, ME.

The Rhode Island International Film Festival seeks
community hosts for visiting filmmakers, August 5-10.  Richard Corso, RIIFF’s
hospitality manager explained the duties: “All you need to do is provide a place
to sleep; filmmakers are responsible for their own transportation and meals.”
In exchange, RIIFF Ambassadors will receive a pass to all festival screenings,
and other perks.  For specifics, contact Richard Corso via email
RichardC@film-festival.org or
phone (401) 861-4445.
SNOB (Somewhat North Of Boston) Film Festival (November
7-9) wants submissions by July 31st.
Boston Latino International Film Festival (September 24
–28) has an open call for
submissions.
The TFI Sloan Filmmaker Fund offers financial
support to films that explore scientific, mathematical, and technological themes
and storylines, or a leading character who is a scientist, engineer, innovator
or mathematician; all genres welcome (except science fiction or fantasy).
Apply by August 1st.

A Man Among Giants, shot primarily in Pawtucket, RI
as well as around Boston, premiered at the Hoboken International Film Festival on
June 4th.  The doc follows Republican candidate Doug "Tiny" Tunstall through his
bid to be mayor of Pawtucket. Director Rod
Webber writes, “This is no small feat, since he is an African-American
little person on public assistance whose primary work experience was as a
professional wrestler.”  Webber is working on a New England screening for later
this summer.

Underlying Notes is set in Rhode Island
and available for adaptation.
[Click to enlarge]

Eva Pasco says her recent novel, Underlying Notes,
affirms how “love, passion, and adventure remain integral parts of a woman’s
life past her prime.”  And it all takes place in the author’s native Rhode
Island.  She thinks it would make a great film and wonders if anyone in New
England is interested?  Time wrote about the novel
here.
Contact the author at
atlanticgoddess1@cox.net.
Mary Trainor-Brigham, who contributed a profile of
Anne Makepeace this month, is putting the final touches on a forthcoming book,
Deep Cinema:  Film as Shamanic Initiation, in which she explores the
connection between ancient initiation rites and contemporary films.
Screenwriter Caitlin McCarthy (of Worcester, MA)
celebrated a one-day trifecta at the end of June:  The Writers Place selected
her screenplay Vera as a third place winner; Free Skate was
accepted as an “Official Selection” of the 2008 AOF International Film Festival;
and Free Skate will be interpreted on camera by actors Molly Leland,
Robert McAfee and Greg Humphreys at the AOF fest.
Just one week prior, McCarthy’s Wonder Drug was
awarded third place in the 2008 Women in Film & Video/New England Screenwriting
Competition.  The grand prize went to Jessica DiGiacinto for Me and
Christian and Sarah Schulman won second with Lonely Hunter.
WIFV/NE will host a public celebration
with partner Lesley University later this month.
July NewEnglandFilm.com contributor Raúl daSilva
also has good news:  his memoir, My Friend Rod Serling, a Legacy is
published in this month’s issue of Fate
Magazine.
The NH Film Office reports that Ralph Morang, a New
Hampshire seacoast-based photographer, will be shooting a short film,
Breakaway, Backdown, in September in Portsmouth. He adapted a short story by
James Patrick Kelly of Nottingham.
The 5th Annual New Haven Underground Film Festival
will be held on September 27th on the campus of the University of
Hartford, with an emphasis on CT-made films. Phil Hall, contributing editor for Film
Threat and author of the books The Encyclopedia of Underground Movies
and Independent Film Distribution, is hosting and programming.  For more
information, go to www.nhuff.com.
Screenings, festivals, meetings and other events at at www.NewEnglandFilm.com/events/