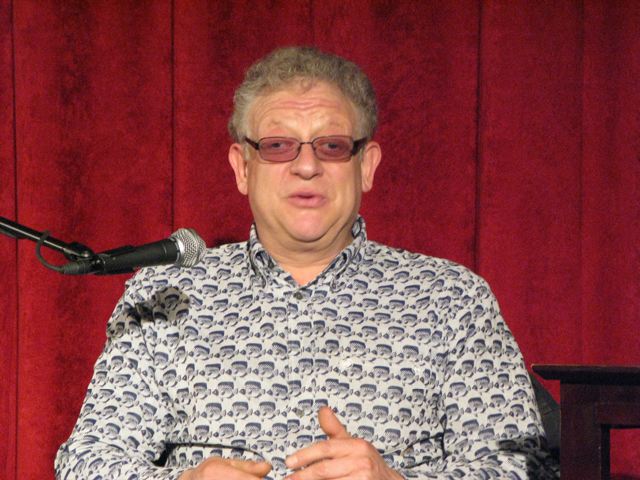 What exactly does a producer do?  Traditionally, a
producer is not seen as the creative force behind a film as much as the person
who develops and maintains a creative space for others.  A producer raises
funds, hires personnel, facilitates the filmmaking process, and then arranges
for the film’s sale and distribution.  A producer is there from beginning to end
but doesn’t necessarily receive artistic acclaim.  Thomas explained the job as,
“A cross between a facilitator and a policeman.  The one who makes sure the work
gets done.”
British film producer, Jeremy Thomas, received the 5th
Annual Coolidge Award on April 16th.  This is the first time a producer has been
so honored.  The highly prestigious independent film award is given to an
individual whose career expands the boundaries of cinema, said Joe Zina,
executive director of the Coolidge Corner Theatre.
Thomas has produced more than 45 films in a career that
spans more than 30 years.  The Last Emperor, Sexy Beast, Fast
Food Nation, Rabbit Proof Fence and Crash are just a few of
the better known films that
bear his personal imprint.
Previous Coolidge Award recipients include director Zhang
Yimou, cinematographer Vittorio Storaro, actor Meryl Streep, and editor Thelma
Schoonmaker.
Another goal of the Coolidge Award is to educate the public
about what filmmakers do and how films get made, so the multi-event celebration
always includes panel discussions of the awardees’ role in the craft of
filmmaking.
This year’s festivities opened with an evening ceremony
that featured testimonials to Thomas’ “fearless, provocative filmmaking.”
Director Nic Roeg (Bad Timing, The Man Who Fell to Earth)
described Thomas as a rarity among producers because “he loves films more than
most producers who just love the deal.  He ought to be called a filmmaker as
well.”
Debra Winger (The Sheltering Sky) claimed that
Thomas rescued her when she considered quitting and attributes her success to
his mentoring.  Tim Roth mirrored these sentiments.  “Jeremy Thomas is a
believer in the best sense.  He truly falls in love with a film and has the
confidence and drive to get it done,” said Roth.
Director Julien Temple spoke of the extraordinary impact
Thomas has had on the British independent film industry, his generosity of
spirit, his being a citizen of the world, and his actively nurturing old and new
talent.  “There is no one more exciting to work with,” he said.
Thomas credited his producing success, in part, to being a
“director’s fan.”  He admires directors and sees himself as their collaborative
partner.  He feels that a producer’s task is to recognize a filmmaker’s unique
talents and join them to the right material.  “I do it subconsciously, not
pragmatically,” said Thomas.  Debra Winger noted that Thomas understands the
meaning of protecting his actors and creating a safe environment where they can
work to their fullest.  “I’m not intrusive,” he said, “although I do have a
point of view.  But, it’s a creative endeavor so I try not to be heavy-handed.”

Thomas receives praise from his peers.
Photo by Hermine Muskat.
[Click to enlarge]

The following afternoon, Nicole Guillemet, former vice
president of the Sundance Film Festival, interviewed Thomas and asked him about
his early life and background as a producer.  Thomas’ father, Ralph, was a
filmmaker whose great uncle was a famous silent moviemaker.  “So, I had no
choice…I was seduced by the film industry,” Thomas said.  The boundaries between
work, family, and business blended together.  “Work was play and I actually got
paid for it.”
He described making 16mm films with his sister and landing
his first job as Ken Loach’s editorial apprentice.  “I was a very bad student,”
Thomas admitted, “but I had brilliant teachers and very good, amazingly good,
luck.   Everyone needs luck.”  He commented on the importance of being an editor
first, and the way in which this skill informed his work as a producer.  “To
actually see how a film is formed, in front of your eyes, to have the big
overview.  It’s wonderful to be central to the movie in the editing room.”

When asked how he comes up with so many ideas, Thomas
remarked that he has hundreds and that the difficulty is selecting the ones that
he truly loves.  He came of age in the late 60s, was strongly influenced by
American politics of that time, and feels that his work and ideology continue to
be informed by that spirit.  He spoke of his love of literature and of good
stories, noting that many of his films are adaptations of novels and short
stories.  The Naked Lunch, Crash, The Shout, The Sheltering Sky, and
Eureka are a few examples.  Despite the changes in technology, Thomas feels
certain that future generations will always find ways to tell stories and to
pass them along cinematically.
On whether or not producing is a learned skill, Thomas said
that the producer’s role is constantly evolving and for that reason anyone can
be a producer.  He is all for film school training, even though he himself had
none.  However, he feels strongly that film school curricula should place more
emphasis on the history of film, though he acknowledged, “students aren’t
interested in film history.”  Consequently, he said, many filmmakers and film
critics do not see their work within a global or an historical cinematic context
and much of the meaning gets lost.  For Thomas, a respect for literature,
history, adventure, and independence not only informs and expands the producer’s
role but affects the final result seen on the big screen.
For more about the Coolidge Award, visit
www.coolidge.org/award.