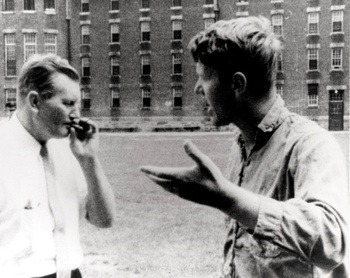 Beyond Black and White

Former Improper Bostonian and Boston Herald film critic
Paul Sherman has been keeping busy.  This month he releases
his
self-published Big Screen Boston: From Mystery Street to The
Departed and Beyond, an exhaustive compilation of 250
motion pictures shot in the city.
Sherman defines a Boston movie as any film that, “takes the
trouble to bring cast members to Boston to shoot action here.”  His collection
includes recent favorites such as Martin Scorsese’s The Departed, Clint
Eastwood’s Mystic River, and Gus Van Sant’s Good Will Hunting as
well as oft-forgotten, under-the-radar gems such as Jan Egleson’s Billy in
the Lowlands, Peter Yates’s The Friends of Eddie Coyle, and Christine
Dall and Randall Conrad’s The Dozens.
While a Big Screen Boston reader will very likely
happen upon a long-overlooked film to go out and rent, Sherman hopes that a
strong grassroots spirit as well as the upkeep of state tax breaks will inspire
today’s filmmakers to make their own contributions to Boston’s independent
scene.  The following is an interview with Mr. Sherman, exclusive to
NewEnglandFilm.com.
Jared M. Gordon: Why did you write Big Screen
Boston?
Paul Sherman: There have been a lot of impressive
movies that have been done in the Boston area.  Especially in the late 1990s,
when independent film was booming and money was easier to find, a lot of very
interesting movies were made.  From Monument Avenue to The Blinking
Madonna and Other Miracles, I wanted to remind people of these movies.  It’s
also my hope that, given the tax breaks and the financial cycle, there will be
more good, locally made movies.
JMG: You mentioned that, in a film such as Down
to the Sea in Ships, the Boston area offered something to filmmakers that
they could not recreate elsewhere.  What is the most attractive thing that
Boston offers to filmmakers?

Boston through the lens of Billy and the
Lowlands.

Sherman: There are two separate beings: films that
locals make, and films by people who come from elsewhere.  Indigenous films are
typically more authentic, but it’s not as if there’s a fine line of
distinction.  It’s what makes a movie like The Departed so good.
Screenwriter William Monahan, who adapted the story, was a local.  He took a
great Hong Kong thriller and gave it a great Boston overlay and ethnic
infusion.
What Boston filmmaking has brought to Hollywood is a
mixture of old and new.  Boston films of the 1960s, 1970s, and 1980s put an
emphasis on Boston’s academic and medical worlds, such as in Coma or
Blown Away.  Thankfully, Boston filmmakers look beyond this today, as these
worlds have become cliché.  Even as far back as the 1930s and 1940s, Boston was
shorthand for a stick-in-the-mud and a real party pooper.  Nowadays, Boston
offers everything to everyone with its tax breaks.  Even so, Boston filmmaking
seems to be in a transitional period, and it will be interesting to see the next
phase for the city as a filming location.
JMG: How did you do the research for your book?
Sherman: Many of the movies were ones I had already
covered through the years.  Most of them I learned about while they were being
made or released.  Through the years, I developed a first-hand knowledge of what
was going on around town.  I also tracked down media coverage of the films that
predated my time as a journalist.  There was plenty of Internet searching, and
even visiting the locations at which these films were shot.  Sometimes, I was in
even in touch with the filmmakers themselves.
JMG: In your book, you attempt to define what makes
a Boston movie.  Aside of course from the setting, have you discovered any
common plot or character themes inherent in what you would describe as a Boston
movie?
Sherman: If you look at movies that really nail
things as far as dramas, like Monument Avenue, The Departed, Mystic River,
or Gone Baby Gone, it shows people who are truly stingy with their
emotions and have a chip on their shoulders.  The Farrelly brothers really nail
that smartass, New England humor.  The most authentic Boston movies don’t
sugarcoat anything.  A movie like The Friends of Eddie Coyle doesn’t once
try to paint a scenic picture, and it works.  This is also why Hollywood
comedies that are shot here are often unsuccessful.
JMG: What attitude changes, in a political and
artistic sense, make Boston filming more attractive than it has ever been
before?
Sherman: It always helps to have a good and popular
movie like The Departed.  You also have those 1990s films such as
Monument Avenue and Next Stop Wonderland that keep Boston on the
fringe of independent filmmaking.  Having popular movies like Mystic River
and The Departed certainly help draw attention to the city, but not as
much as tax breaks.  It’s still the bottom line that counts more than anything
else.  Before the tax breaks, you had the Farrelly brothers shooting in Toronto,
and even parts of The Departed were still shot in New York.  If another
state offers a better deal, then productions simply won’t come to Boston.
JMG: You seem to have a lot of respect for
filmmakers who not only shoot in Boston, but especially for those who invest
time and energy into the smaller details, such as character names with local
significance, or whether Boston accents are convincingly portrayed.  What else
do you look for when analyzing a Boston-based production?

From The Dark End of the Street.

Sherman: It’s easy to spot authenticity.  In a movie
like Good Will Hunting, when they talk about Kelly’s and T passes, you
have the feeling that they know what they’re talking about.  There’s nothing
worse than a Boston movie in which they call Boston Common, “Boston Commons.”
Then there are the movies that come to Boston for nothing more than a generic,
pointless, postcard moment, such as the walk in the North End in Mrs.
Winterbourne.  It’s cliché and it doesn’t add to the movie any more than a
walk by Philadelphia’s Independence Hall would have.  Movies that have the
details right, like The Departed and The Friends of Eddie Coyle,
are more interesting.  Plenty of movies fall into that generic picture of New
England, portraying it as bookish and full of antique stores.  Anyone who spends
any time here knows that it’s not all a glossy greeting card.
JMG: You give a lot of credit to films like Jan
Egleson’s Billy in the Lowlands and The Dark End of the Street for
legitimizing production in Boston.  Has the American film landscape changed as a
result of Boston films?
Sherman: I don’t think I could pinpoint any changes
that Boston movies are single-handedly responsible for, but films like Billy
in the Lowlands and The Dark End of the Street have certainly helped
to create independent film as we know it today.  As Hollywood has become more
hit-oriented, it makes it all the more important for there to be a thriving
grassroots film industry.  I give films like The Dozens credit for being
part of the independent movement and for helping to inspire the resurgence of
indie films that continues to this day.
Sherman will be appearing at the Remis Auditorium at the
Museum of Fine Arts on Saturday, May 3rd for a screening of Frederick
Wiseman’s formerly banned documentary Titicut Follies.  For more
information about Big Screen Boston, visit
www.bigscreenboston.com.