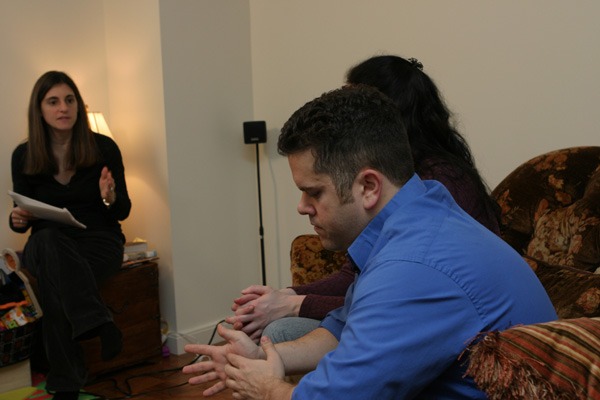 So it turns out when you only have 48 hours to make a film, you don’t have a
whole lot of time for blogging.  Hence my silence til the end.
After an action-filled weekend of organizing, shooting and editing, I can
confidently say we accomplished my goal of having fun.  Having done this
project a few years back in New York, I definitely think this time around was
smoother, more relaxed and organized, and ultimately we were able to create a
pretty decent film.
The best decision I had made was to assign one person the task of writing the
film.  It made my job of organizing on Friday night much less stressful.
The writer Steven Abrams and I (and a few others) spent a short time on
brainstorming but then left Steve to his own devices.  By about 9pm on
Friday, I had character names and a concept so I was able to start calling some
potential cast (I had gathered resumes and headshots in advance but no
auditions).  That night I called a friend who worked at ImprovBoston
because we had decided an improv actor would be ideal for the main part.
Luckily, my friend recommended I post on the ‘fun list’ for ImprovBoston and
Kenneth Breese answered my call and turned out to be perfect for the main part.

I have to admit that mostly I just got very luckily with having an amazingly
professional, fun and laid-back cast and crew.  Kenneth Breese, Christine
McFadyen, Scott Limanek (also on crew) and Chris Collins definitely gelled as
the cast.  Steven Andrada did an amazing job on camera — he brought his
own equipment and was speedy to set up and had great shot ideas.  Eric
Speede was indispensable help on camera and sound and was several times heard
saying, "Don’t worry, I’ve got one in my car."
So what’s our film about, you ask?  Well, it’s called The Missing
Flinck about an art heist enthusiast obsessed with solving the mysterious
theft of 13 paintings from Isabella Stewart Gardner Museum.  The film will
screen on April 15 at Kendall Square Cinema in Cambridge, MA at 7 pm if you’re
interested in more.
On my walk over to the drop-off point, I knew I had a few minutes left (I had
set my watch ahead five minutes), but I ran anyway — it just seemed more fun.
As I handed my materials in, I heard Ben the Boston Project Director yell out
"eight and a half minutes to go" so I think we cut it close enough.  Much
less stressful than our New York drop-off which involved traffic in a taxi, a
heated debate on whether we could actually run faster, and the final countdown
as we were rushing in the door.
As a participant, I’m a huge fan of the 48 Hour Film Project.  Some
might ask — why not just make a film in a weekend on your own?  But
somehow when you know you don’t have an external deadline to meet, you can
always re-shoot or refine the editing a bit more.  And it’s incredibly
satisfying, no matter what the quality, to have a finished film in 48 hours that
can will screen at one of the city’s top indie theatres.
Also see part one of this story.
For more information, see
http://www.48hourfilm.com/