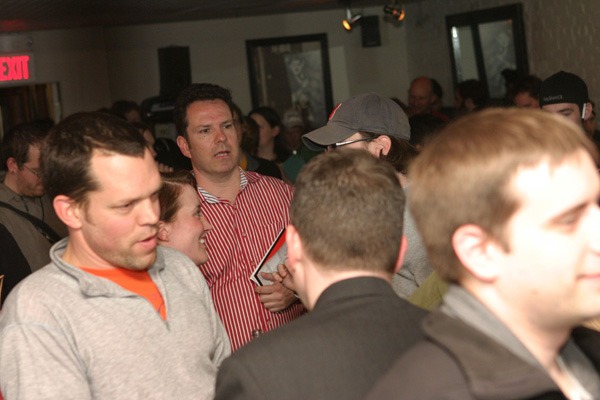 In my first night leading the team Little Plum Pictures in the 208 Boston 48
Hour Film Project, my hope is for everyone to have some fun and for us not to
create the worst movie ever made. So far so good, the genre I drew
was "thriller/suspense’ which means I dodged ‘historical fiction’ and ‘musical or
western’.
This year in Boston there are nearly 100 teams frantically trying to write,
direct, and edit a film in 48 hours.  Everyone got the same required ‘elements’ which
have been posted on the Project website at
http://www.48hourfilm.com/boston/.
Every team ranges in their experience both in filmmaking and the Project.
Some teams have been doing the 48 Hour Film Project for many years across
cities, whereas others are first-timers.  I met one team leader who’s planning on being a one-man team
and heard about
another that has a team of 18 including two seamstresses and a carpenter.
The Project’s policy of a first-come, first-serve sign-up ensures variety.
As soon as I had the genre in my hand, I called my writer (Steven Abrams) so he could get
started.  Knowing it’s a short film (4-7 minutes), there’s not a whole lot
of time to tell a complicated story.  He summed up his mission for the film
quite well, I think: "Whatever it is, I’m thinking a quick inciting incident,
the reaction, and the absurd conclusion. All the while keeping it very simple.
btw, do you have access to the following: a jail cell, a fruit vendor stand, a
1956 Chevy Impala, a grand piano, wooden Dutch clogs, and a trained monkey?"
I told him that might be a tall order except of course for the monkey.
Ok, our ‘shoot’ starts at 8 am tomorrow morning — check back tomorrow
evening for a progress report.
Also see part two of this story.
For more information, see
http://www.48hourfilm.com/