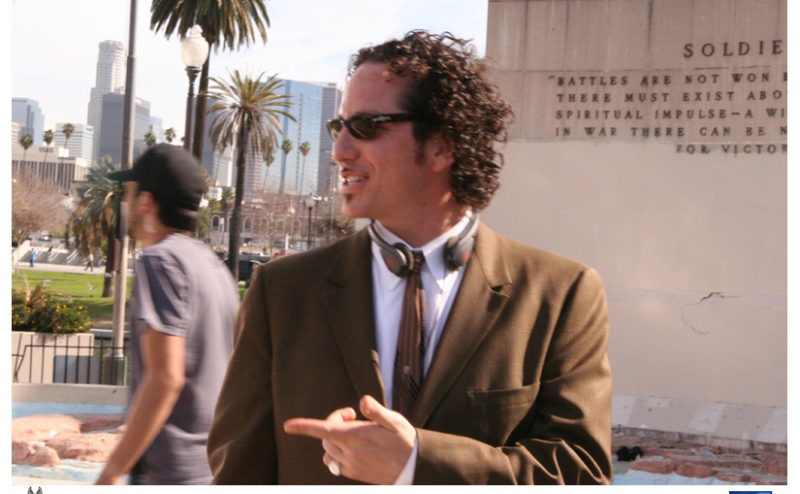 Share
Emerson alum Jeremy Kasten opens this month’s Boston Underground Film Festival with his re-make of The Wizard of Gore.

In 1970, Herschell Gordon Lewis released The Wizard of Gore, about a cabaret-style musician who cuts up women on stage as part of his act.  In the original, the women turn out to be fine. Then 24 hours later they die in the way they were killed on stage.  Kasten’s version takes place in a post-punk downtown LA, where the gruesome "illusions" of Montag the Magnificent prompt a journalist to take a closer look.  The film stars Crispin Glover, Kip Perdue, Jeffrey Combs, Bijou Phillips, Brad Dourif, and features punk-pinups, the SuicideGirls.

Kasten grew up in Baltimore under the influence of John Waters.  In high school, he spent a summer in a trailer hanging out with Paulina Porizkova on the set of Her Alibi.  (He was playing a background clown). He made his way to Emerson College where he studied film production.  Now in LA, he makes a living as an editor and director.  This month, he returns to Boston with his fourth film as director.

Kasten:  With The Attic Expeditions I intentionally made the movie work on enough different levels that one person could believe that one thing was real, and the person who sat next to him could think another thing was real, and they would both would have valid arguments. As fun as it was to try to make a movie work like that, it really frustrated a lot of reviewers.

We are trying to categorize Wizard as “splatter-noir.” But I have talked to people who have watched it and said, ‘I had no idea what the fuck that was about’ and ‘I don’t know what the ending means.’ I contend that it makes sense.  I don’t think it is that complicated at all.

DT:  Splatter-noir sounds like a combination of two great things. What exactly is splatter-noir?

Kasten:  In Zach Chassler’s first script, he opened the movie with the protagonist walking down the street, knowing he has a limited amount of time to unravel the mystery to keep himself from dying — the ticking of the clock for survival just lends itself to film noir elements.  And I could see this working with my love of colors and deep saturation against the cold, black and white world of downtown LA.

When we started to send the script out, we described it, and they would say it sounds really strange for a horror movie.  I told Zach I had a hard time summing up what it is, and he said, ‘Tell them it’s splatter-noir.’ The name has stuck.

DT:  So it’s like a blood-drenched Sunset Boulevard.  Is your Wizard of Gore significantly different from the original?

Kasten:  If you are doing a cover of a film, you need to have some new idea that you are bringing to it, because over 30 years of film and history have changed the perspective of the story. Our Wizard of Gore is very different, not just the world it occupies it, but Zach was able to put characters in the story to bring us into a world that didn’t exist in Herschell’s movie — like the character that Brad Dourif plays — Dr. Chong, a vet back from Vietnam, or Burma, or some war in Southeast Asia, who is obviously really fucked up by the war.  That character has nothing to do with Herschell Gordon Lewis’s movie, but it is part of the world we created and shored up around the content of the story.

Crispin Glover plays the Montag the magician.
[Click to enlarge]

DT:  Cripsin Glover plays the lead, Montag, which may be one of the greatest casting choices of all times.  He is known as being eccentric, what was it like working with him?

Kasten:  He is a very intense actor.  I think that one of the things that makes Crispin so amazing is that he does movies now to finance the films he is making, but he takes each one absolutely seriously, and brings exactly what you expect Crispin Glover to bring, his absolute eccentricity and his peculiar and brilliant way of seeing things.

In terms of what he is like to work with, he is very, very involved from the beginning.  We spent a lot of time talking about the character Montag and we brought in a magician to work with Crispin and talk about the history of magic, like the difference between illusionists and close-up magicians.  Interestingly, there were things built into the script that Crispin did not feel comfortable playing — scenes that revealed the magic in such a way that Crispin felt would color his performance as a magician.  My feeling with Crispin from the beginning was that it was more important to work with what he was able to bring than it was to shut him down.  I stand by that decision, even though it was frustrating for the writer.

DT:  On a practical level, how did you go about getting funding?

Kasten:  We raised money from anybody we knew.  We found a lawyer who helped us create a business plan for no money.  We spent two years reading business plans.  The Attic Expeditions was shot over four years and we raised money as we worked on the film.  The costs were exponential, getting more and more expensive.  Anybody I talked to I would tell about the movie.  It was pretty horrible!

Being a filmmaker is one part artist, one part business man, and eight parts P.T. Barnum. You have to convince people you know what you are doing, and that it will be successful. You have to convince them it is worth their time to invest in your film. You have to share a little of that dream with the people who are buying into it and giving you money.  It’s been about five years since we’ve been working on Wizard and I still work on it every day.  You have to just decide you are a filmmaker and join the ranks of filmmakers.

DT:  The concept of violence as entertainment is explored in the story of this film, which has become a big theme in movies and modern culture.  The original exists in a cheap, seedy world — does that add to the realism?

Kasten:  Part of the beauty of Herschell’s movies is that they’re not in a studio, they’re not on a soundstage, they’re in someone’s shitty house in South Florida.  In Bloodfeast he’s not going to these beautiful locations and these amazing dinner parties, but to crappy suburban homes, and it feels really real.

But I find that movies like Salo and Irreversible get under my skin.  They are made with such conviction and so precisely, that the nature of the violence, gore, whatever, is that much more disturbing. You are watching it going, Oh my god, whoever made this is really fucked up!

Wizard is definitely a gory horror film, and that was absolutely my intention.  But I will say that Wizard attempts to be much more than that.

Kasten:  No. I’m part of the generation that first saw Faces of Death. The Mondo movies were my first exposure to things that you’re not sure if you’re supposed to see.  I understand why some films are illegal.  I don’t put energy into looking for footage on the Internet of people getting their heads cut off.  I may not like them but I don’t want to impose that on others, I wouldn’t take it away from anybody.

DT:  So there will be some interesting bonus features on the Wizard of Gore DVD?

Kasten:  Definitely.  Being an editor is my job.  I’ve worked on tons of big movies, [producing] behind the scenes, DVD stuff for HBO and Starz.  Hopefully the bonus footage will be amazing.

Check out the complete schedule of the Boston Underground Film Festival.  More on The Wizard of Gore here.