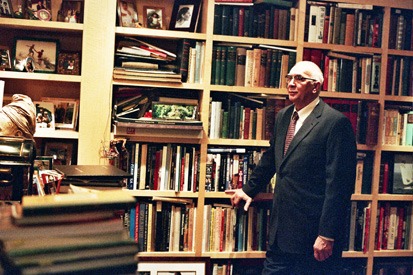 When critics, filmmakers, film lovers, and Frank Langella crowded into the Brattle Theater on January 20th — braving the coldest day of the year so far — there wasn’t talk of the writer’s strike, the cancelled Golden Globes, or the hordes of paparazzi that so frequently flank ceremonies of this ilk — except, perhaps, when Langella thanked the Boston Society of Film Critics (BSFC) for naming him best actor and overlooking “the juggernaut of Daniel Day Lewis and George Clooney.”

Preceded by honoree speeches and introduced by BFSC member and WBZ-TV Anchor Joyce Kulhawik, a leather-clad Langella was perched onstage, singing the praises of the bittily-budgeted ($500,000) indie Starting Out in the Evening, a film that, adapted by director Andrew Wagner from Brian Morton’s excellent book, cast him as a novelist aging into illness and obscurity.  Though the film picked up accolades at several festivals and the actor has received a handful of nominations, his performance isn’t likely to reach fans of cineplexes, or even the Oscars.

It is this distinction — among several others — that separates the BSFC, founded in 1981, from the plethora of critical groups doling out awards across the globe.  As Langella, who began his career at the Tufts Arena and is currently in town filming Richard Kelly’s The Box, accepted his award, he described his decision to associate himself with projects that stressed quality rather than money or box office aspirations.

The same could be said of the BSFC.  With well-regarded local critics, including the Globe’s Ty Burr and the Phoenix’s Peter Keough among their ranks, the group has spent years schmoozing over donuts while naming far-flung (and personal favorites) as the year’s best.  Take, for instance, the voting of Bull Durham as 1988’s top film, or the honoring of Alan Arkin for his supporting performance in 13 Conversations About One Thing (yeah, you haven’t heard of it), or the tapping of Catherine Keener not only for Capote but also for her roles in The Ballad of Jack and Rose and The Forty Year Old Virgin.

“We’re all film enthusiasts,” said Loren King, the society’s president and a freelancer for papers including the Chicago Tribune and the Provincetown Banner.  Speaking from her office following the event, she described the process of setting up the ceremony, which was discussed in 2006 and planned during the latter months of 2007, focusing both on securing top-name talent like Langella and highlighting lesser-known filmmakers and film programmers in the Boston community.

“We get excited about great films coming out of Hollywood,” King said, “But I’m going to say the local programming probably excites many of us even more.  We’re all very mindful of the fact that we’ve got an incredible city for film-going people and we know our audience is really sophisticated.”

Hence the special honors and commendations, given this year to a diverse group that has made Boston both a premiere city for filmmaking and film viewing.  They include Kaj Wilson, the outgoing curator of the Boston Jewish Film Festival, Massachusetts Film Office executive director Nick Paleologos, who has been responsible for bringing eight productions to the city in 2007 alone (“instead of wondering why Boston looks so much like Canada, they’ll wonder why Paris looks so much like the South End,” he said) and Rhonda Moskowitz, who helms Connect the Docs, a group fostering the production of diverse documentaries including Beyond Belief, which follows two 9/11 widows to Afghanistan and back, and was one of the best films I saw at Tribeca Film Festival last year.

BSFC member Gerald Peary, who pens a weekly film culture column for the Phoenix and describes himself as a “social worker critic” — an entertainment writer interested primarily in the fostering of low-budget, independent films — sat near the front of the Brattle watching Moskowitz giddily accept her award moments before Langella took the stage with his.  “We have so many documentarians in Boston who really have to scramble to make docs,” Peary said (himself seven years in production on a documentary about film criticism).  “This little group that Rhonda started meets once a month, and answers all the questions that people need to know about funding, about film festivals.  There’s no money involved.  It’s completely a volunteer organization — a lot of work, a lot of hours.  She does this out of the goodness of her heart.”

It is for these filmmakers and programmers — toiling for years under the radar — that Peary was particularly interested in scheduling a ceremony.  “This was 5,000 times more publicity for the winners,” he said.  “(Before) they got something in the mail maybe months later, that’s all they ever got.  There might have been a mention in the newspapers.  Now their names have been repeated again and again.”

Rounding out the special commendations were Tom Doherty, Brandeis professor and author of Hollywood’s Censor:  Joseph I. Breen and the Production Code and Steve Samuels, Boston-based financier and co-producer of Michael Clayton, In the Valley of Elah, and Running with Scissors.

In addition to encouraging what King calls, “a renaissance of local filmmaking,” both on a large scale and a small, the BSFC highlights exemplary area film series, relying on a subcommittee familiar with programming at the Harvard Film Archive and the Museum of Fine Arts, among other institutions.  Series commended this year include the Films of Charles Burnett and Michael Haneke’s: A Cinema of Provocation.  Also honored were the resurrection of several would-be classic films — Burnett’s Killer of Sheep, Harold Pinter’s The Pumpkin Eater — recently shown on big screens in Boston.

“We look for films that are really remarkable,” King said of the commendations for best rediscoveries.  “Films that haven’t played in the area before.”

While the jury’s still out on whether the awards ceremony will spell more support for Connect the Docs or prompt anyone born after 1980 to watch The Pumpkin Eater (I can only speak for myself), the society has succeeded in, for one night, filling the Brattle with artists both unknown and internationally famous, and ending the ceremony celebrating cinema by screening Langella’s film.