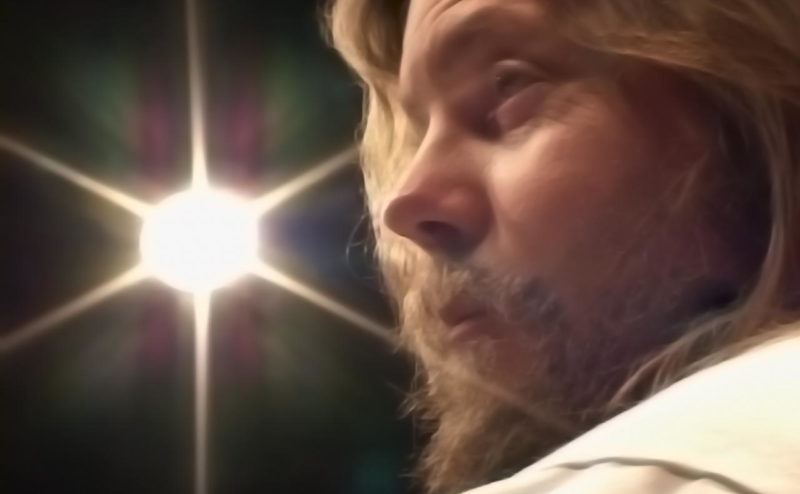 Share
In The Jesus Guy, first-time documentarian Sean Tracey depicts a man who looks and talks like Jesus.  But does he do what Jesus would do?

The documentary, Tracey’s first, follows a preacher for three years as he walks barefoot around America interacting with people.  The evangelical, who went by the moniker “What’s Your Name?” during the filming, resembles the common depictions of Christ.  He wears his hair and beard long and flowing, just like his white robe.  He looks like Jesus; he sounds like Jesus.

But the question is, does he act like Jesus?  In other words, is he the real deal or is he a kook?  Does he possess a special relationship with God that needs to be expressed in service to humankind or does he suffer from an inflated sense of self and need for media attention?

Tracey explores these issues in his 66-minute documentary.

“My philosophy about the documentary since day one was to be as fair and objective as I could be,” he explains.  “I wanted to record the good, the bad, the ups and the downs, even if I became disenchanted with this guy or thought he was the second coming.”

In the style of documentary filmmaker Albert Maysles, who served as a mentor and advisor for the film, Tracey captures the moment as it unfolds without narration.  He pared down 70 hours of footage and revealed, through careful editing, that much like human nature itself, “What’s Your Name?” contains paradox.

On the one hand, the Jesus guy, born Carl James Joseph, doesn’t use money.  He never asks for food or lodging, believing that if it’s God’s will, these things will be provided.  After walking 16 years through 13 countries and 47 states, the longest he’s gone hungry is three days.

No shoes for the weary traveler.
[Click to enlarge]

Other than the robe on his back and the Bible in his hand, Joseph owns nothing.  He walks through all types of weather, and unlike the postal service, does it in his bare feet.  He will talk to anyone at any time, no matter if they are dying, destitute, mentally ill or potentially dangerous.  During the film, we see people making spontaneous confessions to him — about their own devotion, their suicide attempts, and their emotional and physical suffering.  About the only person Joseph doesn’t engage with is a prep school student who posits that his motivation for walking around like Christ might stem from emotional problems.

It’s the only time we see “What’s Your Name?” get angry, which suggests the comment holds some truth.  He’s more polite, yet still firm, with police officers who give him a hard time, thinking it’s their job to be suspicious of a stranger walking around town like Jesus.

There are hints of other turbulent emotions.  His father flies in for a visit and mentions a dark period his son went through before finding God.

Sometimes “What’s Your Name?” takes a break from his walking and wandering and lives with someone for a period as long as a year.  Tracey interviews two women who shared their homes with him, offering a constant source of meals and companionship, as well as help with the media.  “What’s Your Name?” has been featured by 20/20, Time, and the Wall Street Journal, to name a few outlets.

Connie Muir, one of his long-term hosts, complains about his media awareness in the film.  “He was there for the cameras, and that was it,” she says.  She’s still upset that after his long stay, her guest left without saying goodbye.  Unlike Mother Theresa, she says, “What’s Your Name?” is a regular person with less-than-ideal behavior.

He repeats the pattern with another woman who hosted him for a year.  Despite her obvious sadness over his unannounced departure, she still considers him a blessing.  When “What’s Your Name?” saw the film in a small screening, he didn’t like what Muir said, recalls Tracey.  “I told him, ‘This isn’t an advertisement for you.’”

In the end, the project retained the subject’s blessing.

In that way, perhaps “What’s Your Name?” is more spiritual than most, as many would despair if the contradictory aspects of their personalities were magnified on the big screen for dissection and judgment.

Maybe an awareness of his own contradictions allows “What’s Your Name?” to see and challenge hubris in others.  In the film, he takes to task a group of charismatic Christians for delighting in their ability to speak in tongues, a practice he feels should be done privately, without calling attention to the act.

Tracey first read about “What’s Your Name?” in a January 2000 Time Magazine article.  He couldn’t stop thinking about him for six months.

The idea of aestheticism — the ability to leave everything behind to concentrate on spiritual matters — fascinated Tracey, who majored in religious studies and philosophy at Brown University but who makes his living directing TV commercials.  (He directed national TV commercials and infomercials for Maysles Films from 1997 to 1999.)  He wondered how anyone could possess such blind devotion to his or her God, cause, or mission in this day and age.

“I asked myself if I thought this guy could carry an entire movie.  Did I think he was interesting and complex enough?” Tracey says.  In the end, he invested seven years of his life and used his own money to make The Jesus Guy.

“What’s Your Name?” now goes by his given middle and surname of James Joseph.  His refusal to give his real name in the film met with reactions ranging from confusion to hostility as people repeatedly asked his name, only to be answered with, “What’s Your Name?” as if they were caught in a comedy routine.  Still, the name change disappoints Tracey.

“I watched a thousand interactions of him saying his name was ‘What’s Your Name?’ I was disappointed when he stopped doing it, as aggravating as it was to some people.  He very deliberately picked that name in the tradition of the Eastern religions and Buddhist sects that give people koans to think about.  By saying his name was ‘What’s Your Name?’ it suspended the normal interactions we all get into when we first meet people. What’s your name?  Where did you grow up?  Where did you go to school?  It’s a way of getting information from people so you can size them up and dismiss them.  By not engaging in that small talk, it’s a way of opening up a more profound — as opposed to mundane — conversation.”

And maybe this is what The Jesus Guy ends up being as well, a real conversation.