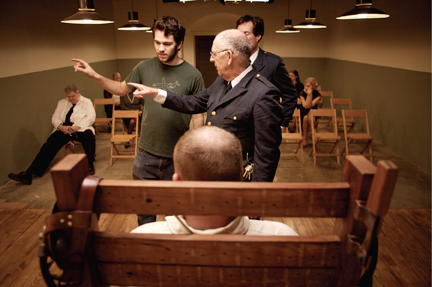 Morality and Mortality in One Long Shot

Share
Screening this month at Sundance, New England natives Wyatt Garfield and Ed Yonaitis's narrative short, The Execution of Solomon Harris, focuses on one man’s dilemma when a power failure occurs while a prisoner is in the electric chair.

The initial inspiration for The Execution of Solomon Harris came from an actual time when a circuit blew during an electric chair execution.  In the real event, the guards had to restore power to the chair to carry out the sentence.  Hearing about it made Ed Yonaitis wonder:  Is there a right or wrong way that someone should be put to death?  And who are we to decide?

Intrigued by these questions, and eager to respond to them in cinematic form, he teamed up with his college friend and constant collaborator Wyatt Garfield.  Together, the New England natives (Garfield from Portland, ME; Yonaitis was born in Hanover, NH) plotted a filming format that would emphasize the narrative elements and beg the audience to also ponder their motivating questions.  They decided to realize it completely with “one unbroken shot.”

While Garfield believes audiences connect to films through “subtle, organic, and intuitive treatment of space, time, atmosphere and performance,” Yonaitis has developed his filmmaking sensibilities in response to the problems he sees while watching films.  He asks himself, “Is the dialogue between the characters for the audience, or for themselves?”  “Too often I find that the characters on screen are simply shallow manifestations of the filmmaker’s motive or message,” says Yonaitis.  The pair recently explained their unique but complementary approaches, and other aspects of making this short, with NewEnglandFilm.com.

Scott Caseley: The film was shot in Savannah, Georgia, premiered in Spain, and next month will make its US debut at the Sundance Film Festival.  Can you explain how this film has a New England connection?

Wyatt Garfield:  This film was done as my senior project [at the Savannah College of Art and Design].  In the summer of 2006, I was originally working on a different idea for my senior film; it was to take place in a New England harbor with barges and tugboats, but ultimately the logistics behind producing it proved to be impossible with our budget.

So, my attempt at making a true New England film was thwarted, and it was time to look south.  Though I have fond memories of our time in Georgia, I think the execution story was a subtle resonance of the way we feel about the South.  The script, especially in its early, sprawling drafts, was somehow a guttural reaction of a New Englander’s experience of Georgia and the South in general.  Southern hospitality is a thin guise for lack of social acceptance, and there are many things that don’t fit into polite Southern conversation, and I think this film cries out against that mind set to some degree.

SC: The movie runs just under eight minutes including credits, and it’s all seemingly one continuous shot, why put so much pressure on yourselves to tackle such a logistical challenge?

Garfield:  First, we knew that if it was performed as a gimmick, or if the drama suffered in some way as a result of it, the film would be a failure.  We wanted to reveal the characters through behavior as well as dialogue, and behavior often becomes lost in editing, or painfully exaggerated.  As for this film in particular, it demanded that the characters be bound to real time, for the central conflict is unbearably time sensitive — as every moment passes and the conflict is not resolved, the suffering becomes more inexcusable.

Ed Yonaitis: Shooting it in one shot introduces a new level of experience for the audience by revealing the story in real time with a fixed perspective.  The audience may not be aware of it at the time, but it does introduce a level of subconscious suspense for the viewer.

SC: How many takes did you have to achieve this?

Yonaitis:  The "master" shot is actually broken into four different shots, which we shot over three days.  We used masked edits to hide the cuts.  It was about 11 to 14 takes per shot.  The longest and most difficult shot took 23 takes.

SC: To achieve something like this, everything had to be perfect.  What were some of the problems that you did not foresee when you set out to do it?

Yonaitis (in green) directs actors on the set built for Execution.
[Click to enlarge]

Yonaitis: We had both experienced this method of shooting before with my own senior project, which I wrote and directed and had Wyatt on as cinematographer.  In that short film, every scene was one unbroken shot — no masked edits, either.  From that experience, we learned that one of the most difficult aspects of shooting long takes was the actors losing emotional interest from doing take after take after take.  So, going into Execution we knew that keeping the actors ready and on their toes for each take was an important goal we had to achieve.

Garfield: The warden’s character was well suited for shooting in this manner, (rehearsing and shooting many takes).  It was essential that his physical behavior seem routine and mechanical.

SC:  Your end credits indicate that the film was edited on both an AVID system and using Final Cut Pro, why did you choose to use both rather than one over the other?

Yonaitis: The main reason we did this on AVID was because the HD system at our school can only be used through AVID.  We did all the DVD production through Final Cut Pro and DVD Studio Pro.

SC: What kind of camera did you shoot this on?

Garfield: It’s not intended to be an individual’s point of view.

Yonaitis: The main perspective is that of Alfred, the warden.  We follow him throughout the entire film; we see his actions, his decisions, and his thought process.  By never letting him leave the frame for more than a few seconds, we become fixated on the nuances of his behavior.

SC: Your film addresses the theme of one man’s choice of who is really responsible for another man’s life, why did you feel that it was important for it to be an individual’s choice rather than have a group decision?

Garfield: We don’t really have a political opinion that we try to push in the film.  The question we were interested in was whether it was noble for him to uphold protocol, keeping the responsibility abstract, and at the end take full responsibility himself.  Responsibility is contagious, and easily spread, and it would have been very easy for all of the people involved to step up and become morally implicated had the warden not taken responsibility himself and prevented others from doing so.

Yonaitis: In an early draft of the script, the main conflict was all of the guards deciding together whether or not to take responsibility for the prisoner’s life.  However, that angle took the story in a direction that involved more yelling and pulling out guns, in the end we decided to avoid that.  By fixating on a single person’s conflict, we have something more contemplative, and at the same time disturbing.

SC: Why did you choose to have this theme explored at a prisoner’s execution?

Yonaitis: Setting the movie at the moment of execution definitely affects the immediacy of the conflict; there is no escape from the issue at hand when there’s someone in a chair screaming his head off.  It was also a personal challenge to have the intensity of the situation come off as genuine and realistic.

SC: The film challenges the audience’s beliefs about who deserves sympathy from society, by the end of the movie, you can perhaps even switch your pity from one figure to another, a total reversal, was this intentional?

Yonaitis: We actually haven’t considered this idea about shifting the audience’s perspective of character.

Garfield: In our minds, the warden has always been the central figure to the story.  Yes, the prisoner deserves sympathy, but he remains masked and unknown as far as the audience is concerned.  The prisoner’s execution (or failure of) is what sets off the warden’s internal conflict, and forces him to make a painful decision.

SC:  When arranging for this interview, you asked that you both be interviewed rather than one over the other, why was this so important?

Yonaitis: When I was approached for the interview, it didn’t seem right to me, because this was truly a collaborative project.  I couldn’t fully answer the questions on my own without Wyatt’s input.

SC:  How did you two come to start working together?

Garfield: We did a semester abroad in France where we were roommates, along with the producer of the film, Jett Steiger.  The three of us did every project together that quarter.  It was like 21 projects over the course of two months in France.

SC: What kind of budget did you have for this piece?  How did you raise the money?

Garfield:  It had a budget of $20,000.  It was all funded through my family and extended family.

SC: So many times nowadays, filmmakers hear that their film doesn’t have a chance of getting into a top tier film festival like Sundance unless they have some stars involved, how do you think that you were able to break through without any big name talent?

Yonaitis: It’s kind of a mystery to me.  Having a film that addresses a pressing topic is a way of getting people’s attention.  The manner in which we shot it could be a draw, if you consider what a feat it was.

Garfield: You never know who’s going to like your film and for what reason.  We even had someone who thought the movie was a dark comedy.

SC: Has the Sundance acceptance changed anything for you as filmmakers, or as individuals?

Yonaitis:  It’s exciting and also terrifying.  It means that we need to decide what are we going to do in the future and how we’re going to make another film happen.