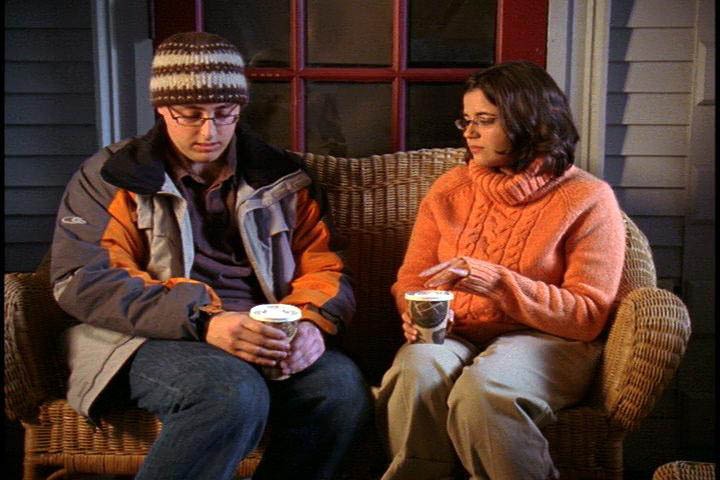 Share
For Rachel Israel, making a life-inspired narrative short at RISD led to a prestigious award at the Rhode Island International Film Festival and a screening at this month’s New England Film and Video Festival.
The sound went out.  Wallets were lost.  A car was crashed.  Yet Rachel Israel, a senior at Rhode Island School of Design, completed shooting of her short film Brandon in under 12 days — and went on to win the student competition at the Rhode Island International Film Festival a few months later.

“I was totally shocked,” Rachel told NewEnglandFilm.com on the phone after Yom Kippur breakfast.  Israel’s steep competition included worldly films that explored overseas turmoil and vivid dreams.  But her 13-minute romantic dramedy proved to be the judge’s favorite.  Brandon is an honest, funny, (and yes, it’s a cliché but in this case, true) touching short about the sort-of courtship between Hannah (Hannah Schafer) and the slow-witted yet effusive Brandon (Paul Wozniak).

Jenny Halper:  How closely did you work with the film department at your school?

Rachel Israel:  The crew was almost entirely comprised of fellow students, which actually worked out very well.  Everyone knows each other.  It’s a close department, the school provides the equipment, and they also offer scholarships from the film department, which are hugely helpful.  Plus, my department nominated me to apply for a Princess Grace Foundation film grant.  So that was very helpful.  I wouldn’t have been able to do the shoot were it not for that grant.

JH:  So you’d worked with everyone before.  How did this make the shoot easier?

Israel:  On a film shoot, problems arise constantly.  It can be very stressful, and being with people you know is very comforting when things start going wrong and you need to stay an extra couple of hours.  Even when you plan very well and in advance, you run into problems because you’re coordinating all these people, and there are time constraints.

JH:  Was there an aspect of the film that was actually improved because you had to make a quick adjustment — you simply didn’t have time or money for what you planned?

Israel:  I think that having limited resources forces you to focus on the thing that’s really important — whether you have nine dollars or 100 dollars, you need to know what’s essential.  So, for instance, I had storyboarded more shots than I ended up being able to do.  If I planned for 10 shots I had to pare them down to three.

JH:  The dialogue in the movie is both natural and surprising.  Like when Hannah and Brandon are on their second date and he says, “My mom has skin cancer.”  That doesn’t come up again.

Israel:  His character is someone who has all of these stream of conscious thoughts — he’ll make random connections, and all sorts of stuff will just come out.  So at that moment he’s feeling sorry for himself, and he thinks, “Oh, my mother has skin cancer” and mentions it.  I don’t know what it was referring to, it’s something that came out when I was writing the scene, and I thought about taking it out at different times.  It’s one of the most random things he says.  How did you read it?

JH:  That he was trying to get her to feel sorry for him.  Those are the conversations people have when they’re on really awkward dates and they don’t know how to deal with each other.  You don’t usually see that.

JH:  Is he based on someone in your life?

Israel:  He’s a combination of two people.  He’s the first person I dated.  And I had trouble breaking up with him.  He didn’t get it, he didn’t understand what that meant, and I ended up dating him for three years, so that’s the situation the film’s based around.  And then there’s another friend who is verbatim that character.  I took the scenario I was in as a first time dater who didn’t want to hurt feelings and tried to heighten the awkwardness by [making Brandon] the other person in my life.  I think most work comes from experience you’ve had.

JH:  Hannah says, “He’s retarded,” and her friend says, “He’s Jewish.” Did you have a friend who said that to you?

Israel:  That’s from conversations I’ve had with my mother while dating someone who wasn’t meant for me.  Finding someone Jewish is a big priority no matter what else is wrong with them.  It’s a cultural thing.

JH:  Was there an aspect of filming you thought was going to be difficult that ended up being easy?

Israel:  I thought it would be difficult to cast it. Working towards the scenes as part of my screenwriting process, I did a sketch with people that I knew from Brown [University] to play the characters for the purpose of the sketch.  It worked out pretty well.  Then I went through about a month of casting with Brown theater majors, a whole bunch of people for different roles, but I ended up going back to the original people I had cast in the sketch.  That was nice because I learned a lot about the characters through the process of casting and trying [the material] out on people that, for one reason or another, weren’t quite right for the characters.  I was able to better understand what was needed for the performers.

JH:  What changes did you make?

Israel:  I can’t remember specific screenwriting changes that happened, I was revising the script for months and months, but Paul, who plays Brandon — he’s an improv actor.  So there’s a lot of material that he [added] on the first date that they go on.  There’s a portion of that that is improvised.

JH:  The scene in the restaurant?

JH:  How did you get that location?

Israel:  What I learned was that small businesses are great for giving you permission to shoot.  Large businesses, not so much.  But the small businesses in Providence were very welcoming, and many of them just opened the doors and allowed me to come in without a shooting permit.  Others I paid a small fee.

Israel:  We rented an apartment for a few weeks.  One thing that was incredible was the Salvation Army lent us all the props.  All the furniture that makes up her house, the dining room — all of that was loaned by the Salvation Army.

JH:  How did you shoot it so quickly?

Israel:  We were shooting almost every day, going between locations.  And I had the spring semester for editing, post production, and sound work.

JH:  What did you learn from making Brandon that you’ll bring with you to your next film?

JH:  So you’ll make movies about characters, rather than movies with complicated plots?