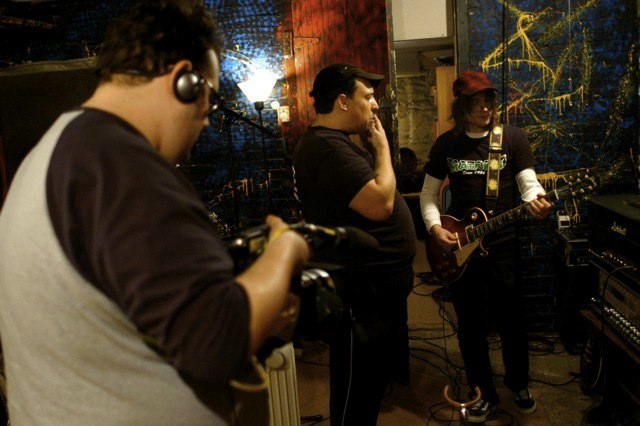 Share
Director/editor Benjamin Oliver redefines Boston rock with two entries in this month’s New England Film and Video Festival.
When the documentary Easy Trouble was released in March, The Boston Globe hailed it as "illuminating" and "an adrenaline rush for Boston rock lovers."  The film, directed and edited by Cape Cod native Benjamin Oliver, chronicles the struggles of garage rock band, The Charms, as they tour 52 cities in 2005.  "I made Easy Trouble to prove to myself that I could put something like this together and to make a film about a band that I enjoy listening to," he says.

For Oliver, it was a cinema class in high school that revealed to him the power of film and inspired his odyssey toward becoming a filmmaker.  "That’s when I discovered that movies were something bigger than what I happened to see on the screen," says Oliver, who went to Sacred Heart High School in Kingston, MA.  "I saw film as another way to interpret life and explore human emotion in-depth."

After graduating from Sacred Heart in 1999, he took a year off then headed for a year of intensive, hands-on film training at Vancouver Film School — where filmmaker Kevin Smith had studied years prior to making his first indie, Clerks. The film, Oliver says, proved that you don’t need much money to make a movie, so long as you have a good story.

Several short films, music videos, and one documentary later, Oliver, now 27, has screened at festivals across the country, earning sound recognition for his work.  NewEnglandFilm.com talked with Oliver about making Easy Trouble and directing music videos for another popular Boston-based band, The Sterns.

Jesse Logan: The New England Film and Video Festival is coming up.  How does it feel to have your work featured there this year?

Ben Oliver: I am pretty excited about it.  It’s the longest festival in New England, which is pretty cool.  I can’t wait because The Charms documentary is finally going to play somewhere in front of an audience, which has never happened before.

JL: How did that journey toward making the documentary with The Charms begin?

Oliver: I did a music video for them, which is how it all started.  I actually bought a CD of the band before I knew any of them.  I went to edit a music video for a totally different band, when I met The Charms’ manager.  He’s a pretty cool guy.  I kind of hung out with them and eventually they approached me to make the documentary.

We made the music video in April 2005.  That summer, they went on the road for their first tour.  And I was like, you guys should just go buy a really cheap mini-DV camera at Best Buy for $200 and take that with you.  In September, I got back like 30 tapes, which were just all over the place, numbered.  In January, I went and shot interviews with all the band members that still existed because it was a kind of tumultuous tour — but in a rock and roll kind of way.

JL: You said at one point you had some 60 hours of footage.  That must have been an intense editing process for you.

Oliver: It took me a year, on and off, to make.  I finished in September 2006.  I was doing a lot of traveling at the time.  I had like three backpacks — one full of hard drives, one with my computer in it, one with notes.  I was either with my girlfriend at the time in Connecticut or at my parent’s house on the Cape or anywhere else; and if I had a few hours, I’d just take everything out and start chopping away.

JL: What kind of documentary about The Charms did you ultimately want to make?

Oliver: I’ve always been into rock and roll films.  I think they’re pretty interesting.  But a lot of music DVDs are just about how great the band is.  And we decided to do something different.  They basically gave me free reign to do what I wanted.

They’re from Boston; and in Boston I think we kind of fall behind a lot of places.  I mean New York is New York and LA is LA.  Where the heck is Boston and who really cares?

I wanted to make a movie in Boston about a band that doesn’t need to be like a Boston band.  Not to put down the Dropkick Murphys.  But I mean how much more drunken Red Sox can they get?  I like them.  But The Charms aren’t like drunken Boston Red Sox, which I’ve been saying a lot lately.  I get tired of it.  I think you can make movies in Boston that have nothing to do with the city of Boston.  So it was a little of that and a little bit of just wanting to make a rock and roll movie.  And I was able to make something that was not a puff piece.

JL: Can you describe your technique as a filmmaker?

Oliver: Well, I did the 48 Hour Film Project in 2005.  The film was called Life after Leukemia.  The rules said we had to use a former child actor as a character.  I made something on purpose that I wanted no one to like.  And it won best film.

Ben Oliver looks happy at Sundance.  Decide for yourself if Life After Leukemia is "down and dirty" here.
[Click to enlarge]

I already had a feeling that everybody was going to take a safe route.  And we went down and dirty, like he’s a living-out-of-trash-bags type of character.  I had some experience with the 48 Hour Film Project before and no one tries to do the more down and dirty and edgy stuff.  You can do it without being gratuitous.  That’s the way I chose to go.  I went through some turmoil in my life the week before; and I was like, yeah, I’ll make something and if they hate it, that’s cool.  I was in the right mindset to do something like that.

Honestly, I intentionally just tried to piss everybody off and make something that hopefully the people making the festival would say, ‘We can’t screen this, it’s too filthy.’  And I don’t think it was filthy enough.  I wish I had gone farther with it.  If you’re writing something you feel totally safe doing, why bother?

JL: You’re also screening a music video you did for the rock band, The Sterns, at the festival.  The song tackles a pretty touchy topic — abortion.  But the video doesn’t seem to pander to any one viewpoint.  How did you manage that process?

Oliver: As far as the subject matter, that’s all in the song.  The band came up with the original treatment.  When The Sterns’ manager sent me the song, I listened to it about 40 times and we had an email thing going back and forth.

I have my personal opinions.  Everybody else has their personal opinion.  But go about it in a good way, in a way that will actually get something done.  All we’re trying to do is illustrate what goes on.  I’m kind of happy when people say, ‘this is right down the middle.’  Hopefully, when you watch the video, it doesn’t come off as either way.

JL: What has been the response thus far?

Oliver: The first thing we did was put it on YouTube.  And then it got posted on Spin.com.  I think it has about 45,000 hits on YouTube, which is pretty awesome.  The thing about YouTube that I find is that some guy crying about Britney Spears gets like three million downloads and an attempt at being slightly artistic gets only 45,000?

Oliver: I like working as an editor.  Eventually, I’d like to start making features that meld narrative and documentary together to a certain extent without being the Blair Witch Project.  I’m trying to make films that maybe get people really pissed off or maybe make them come over and pat me on the back because then you’ve gotten under their skin.

Ultimately, I want to make movies about real people.  I’m like most people, trying to get into peoples’ emotions.  Hopefully, I won’t make the movie Transformers, which really pissed me off.  I’ve been a Transformer fan my entire life.  And it was the worst thing I’ve seen in my entire life.  It was a big car commercial.