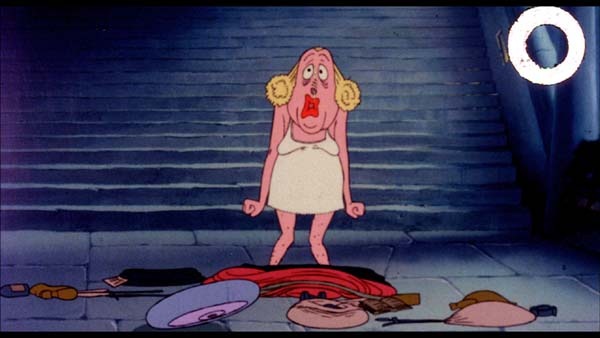 Share
Perry Paolantonio charts the evolution from “No Frills DVD” to the cutting edge of digital restoration with his Boston-based business, Gamma Ray Digital.
What started out in the year 2000 as “No Frills DVD” has morphed into something quite different.  NewEnglandFilm.com got to spend part of an afternoon recently visiting with Perry Paolantonio and learning a bit about what he does and what his company, Gamma Ray Digital, can do.

When Paolantonio started No Frills DVD he had a simple concept: a small company that would take your edited video or film and your artwork and transform it into a finished DVD at a reasonable cost.  Then things changed.  Cheap DVD burners and software hit the market and almost anyone with a home computer could edit and burn their own DVDs. If you had a printer, you could do the packaging yourself, too.  But you also were free to make your own mistakes as well as your own DVDs.  And therein hangs a tale.

Times change, and people must change with the times.  Those who work in digital motion imaging are living and changing at a breakneck pace.  There are a vast array of formats, codecs, and equipment that are changing daily, and the choices and possibilities seem almost endless.  Wait a few months, and the landscape will change again.

People who want to tell a story through film or video follow a very long and tough road.  Scripting, budgeting, finding talent, and all of the rest that goes into making a movie are daunting enough as it stands.  Add to that the different output formats and the difficulties of getting from where you are — your original shooting format, to where you need to be — whatever format you need to deliver your project in, and the complexities become enormous.  Each step along the way poses the possibility of making a bad choice that can be difficult to recover from.

Here’s a closer look at the before; note the scratch on her nose.
[Click to enlarge]

Enter Perry Paolantonio.  Paolantonio is becoming the Mr. Fix-It of the post production digital world.  Located in a sixth floor office on Summer Street in Boston, the world is starting to beat a path to his door.  To the uninitiated, what Paolantonio does may seem like digital alchemy.  Taking almost any original format:  film, DVD, digital files or videotape (both analog and digital), he is able to transform it into it a clean version of the intended final format.

When NewEnglandFilm.com met Paolantonio he was finishing up restoration on a seven-hour Hungarian film.  After conversion from film to a digital intermediate format, the film was cleaned up frame by frame; scratches and signs of dirt were removed and any adjustments for color and density were made.  (See the photos for similar examples of before and after.)  Then the film is saved in a digital format, ready to be transferred to whatever final output format the producer wishes.

Paolantonio still does the DVD work he started with.  Authoring DVDs, making sure the artwork conforms to DVD standards, supervising replication and duplication of the DVDs, etc.  A quick word about the difference between DVD replication and duplication: What you and I do at home is DVD duplication; we take a blank DVD and a laser burns the file information into it.  Replication is a different game.  The Hollywood movie you buy on DVD is replicated, not duplicated.  It’s similar to how vinyl records were made: they were pressed into being.  A heated vinyl blank was stamped by metal dies that impressed small grooves around the record.  In those grooves were the sound.  A replicated DVD is made with glass masters that stamp the DVD material and imprint the image and audio files.  Duplication is great if you only need a small number of DVDs, replication is called for if you need more than a few hundred.

Gamma Ray is the only place in Boston to use the Spruce MPX3000 hardware MPEG encoder, which is one of the best MPEG encoders.  This is how Hollywood makes their two-hour movies look so good on DVD.  They have great (but expensive) technology not available to those who make DVDs at home.

Paolantonio is a friendly and open man who is very good with advice and suggestions. Some of his short-list of advice includes:

He doesn’t mind if you don’t take his advice; it might mean more business for him down the road.