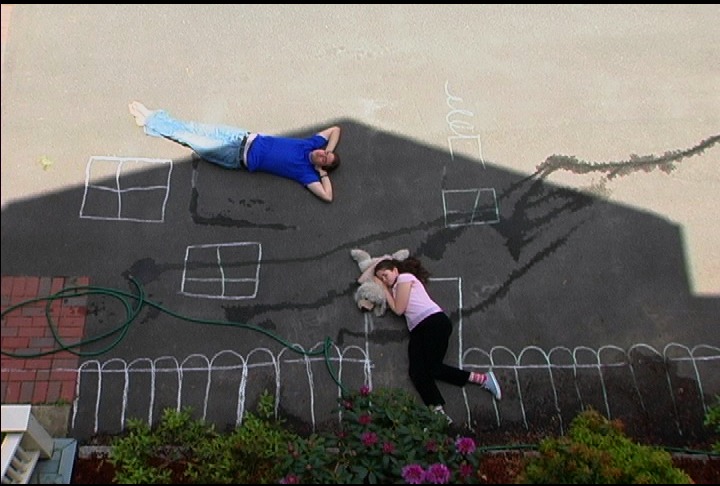 Share
This month, the Newburyport Documentary Film Festival and the Museum of Fine Arts, Boston will present Allie Humenuk’s seven-year documentary study of artist, Abelardo Morell:  Shadow of the House.

In her words, Allie Humenuk’s documentary about photographer Abelardo Morell is in its essence about “looking closely.”  In total, she and her camera filmed Abe for over seven years.  Shadow of the House is told in a completely non-linear fashion, detailing the artist’s life from his escape from Cuba at 14 and continuing on to today where he is widely regarded as one of the world’s most celebrated photographers.

Allie Humenuk calls herself a freelance director of photography (DP) and is also employed by Vida Health Communications in Central Square.  She was raised in Philadelphia and went to school at Harvard.  She didn’t set out to major in film, however it was there that she first developed a passion for creating imagery and documentaries.  She says that, “Abe’s way of making his way through the world with his camera reflected my own desire to do the same thing.  Maybe he was an excuse to do that very thing.”

So for seven years, she found herself not only making a film about an artist whom she really looked up to for reasons that extend beyond his lens, but also learning a lot about herself.  She related to the fact that his story was universal, covering such issues as family values, having an identity to call your own, and the politics of culture.  What started out as a planned short became an odyssey to transform her own insights into cinematic form,  all because of one thing that Abe said that really resonated with her at a lecture:  “It is amazing how a good picture can make me want to get up in the morning.”

Scott Caseley: How did you first become acquainted with Abelardo Morell?  What was it about him that you thought made him film-worthy?

Allie Humenuk: I heard Abe talk about his work in 1992.  I was drawn to the way he talked about going about his work and what drew him to photography.  I had recently graduated from college and I knew I wanted to make documentary films, but I was daunted by the prospect of how difficult it would be.  Something about Abe’s talk made me feel like I just needed to get out there and do it.

I met Abe in about 1995 when I started to work with his wife, Lisa McElaney. She is a filmmaker who owns a company called Vida Health Communications. Her work focuses on public health and educational issues.  At first I was a freelance DP.  And, later I joined her as a producer, DP and editor.  We became friends and I met Abe.

SC: What was the genesis of the film itself?

Humenuk: The film came out of the idea to make a short film about Abe going to Paris to make a camera obscura photograph of the Eiffel tower.  He had not been out of the country for years.  It represented a shift in his way of thinking about making images — he was interested in moving beyond his house and familiar settings.  Once there, I realized there was a much larger story I wanted to tell.

Allie shoots Abe in the dark room.
[Click to enlarge]

SC: What is his technique for his art called, and can you detail the process under which he creates these photographs?

Humenuk: Abe uses a large format camera to make his images.  I am not sure you can give that a name.  He sometimes makes camera obscura photographs.  To make these he finds a view he likes from a window.  Then he covers the window with black plastic and makes a small hole in the plastic.  The light comes in from outside — upside down and inverted and you can see it on the wall opposite the window.  He then places his camera in the room and takes an image.  The exposure can take up to eight hours.  So he is not in the room when the negative is being exposed.

SC: What kind of budget did you have for this project?  How did you raise the money?

Humenuk: I started this film thinking it was going to be a short film and I planned to pay for it myself.  As it grew, I applied for grants and held fundraisers.  The LEF Foundation was a huge support.  I paid for a lot of it out of pocket and individual donors paid for about one-third of it.  Because the film was made over many years, I was able to spread out the financial burden.  I had a full-time job at Vida that was flexible so I sometimes left for months at a time to shoot films for other people.  This money helped to pay for the film.  I also took freelance DP jobs that were a week or two at a time.  All that money went into the film.

SC: How many crew members did you have working with you?

Humenuk: I worked alone because I didn’t want other personalities getting in the way of my relationship with Abe.  We were often in small spaces and I felt like there would be more intimacy if it were just my camera and I.  I took sound as well.

SC: Do you feel that doing a project this long was a help or hindrance to your storytelling?

Humenuk: It was necessary for the story because the story is about time.  Abe takes long exposures.  I took many years.  My process sort of reflects what I value about his.  He does not rush the world.  The nature of how he makes art won’t let him.

SC: What kinds of camera(s) did you shoot the project on?  Was it difficult matching footage shot at such different times?

Humenuk: I shot much of the film on a DSR 300 — a DVCAM camera.  That camera was stolen when I was about 3/4 finished shooting the film.  I then went to a Panasonic DVX 100.  The images from that camera do look different from the other camera.  When I watch the film I see the difference.  I am not sure how many other people do.  It was just something I had to accept.  I could not afford to buy another camera that would have been the equivalent of the DSR 300.  Renting is really expensive.  It made economic sense to buy the Panasonic DVX 100 and use that.  For the scenes I shot in the dark when Abe is making camera obscuras, I used a VX 100 and a slow shutter speed.

SC: What sort of technical difficulties did you encounter along the way?

Humenuk: The usual problems of light and sound.  I could not control the environments in which I was working so if we were working near a busy street I had to deal with it.  One day when I was filming his parents, a construction crew was working with a jackhammer just outside their window.  It is a key scene.  The sound really bugs me, but I was not going to not use it because of the bad sound.  In general, I am very careful about how I shoot.  I pay a lot of attention to framing and the sound quality.  The film is shot in the vérité style, but that doesn’t mean I just whip the camera around.

SC: What would you like Abe’s family to get from watching the film?

Humenuk: His family?  I didn’t think about that.  But I have heard that his kids really like the film.  Lisa has told me that it has let them see their father in a new light.  For Brady, it sort of tells the arc of his life.

SC: As part of the film, Abe makes a journey back to Cuba after being away for well-over 30 years.  His father had been persecuted and arrested by the Castro regime.  Had he stayed, he would have surely faced death.  What kind of resistance did Abe receive from his decision to go to back to Cuba?

Humenuk: His parents were the huge obstacle and his own fear.

SC: How were you able to travel to Cuba to film parts of this film?  Did you deal with a lot of hassles along the way on this part of the cinematic journey?

Humenuk: I went to Cuba as an academic doing research.  I was teaching at Harvard at the time and I felt like gathering footage was my form of research.  There are lots of hassles in making films.  Equipment breaks, you find yourself in places that are too dark to film in or too small to get the coverage you need.  It is part of the journey you buy into when making a film.  At times I felt totally defeated.  But, the good days helped to ease the sense of frustration.